In just two days, more than two dozen new wildfires have started in British Columbia, bringing the total to 146 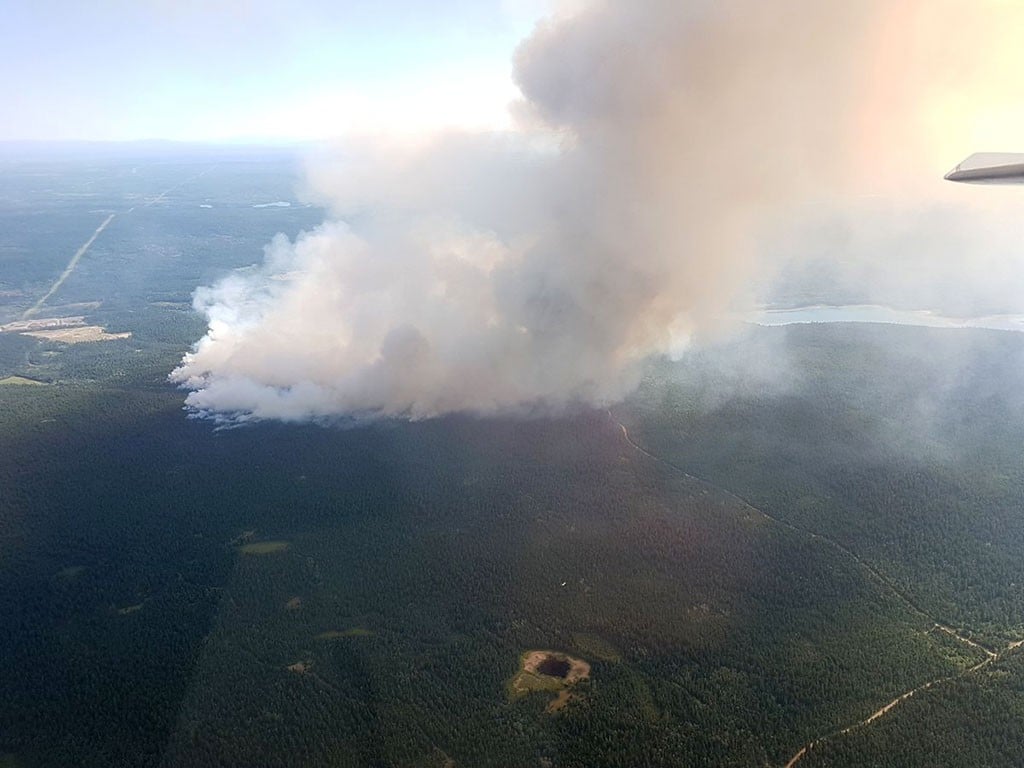 Crews worked through the night to build a containment line at the fire near 100 Mile House. (BC Wildfire Service/Twitter)

KAMLOOPS, B.C. – A combination of lightning and tinder-dry conditions has led to more than two dozen new wildfires starting in British Columbia over a two-day period.

Kevin Skrepnek of the BC Wildfire Service said the majority of the 17 fires that started Monday were the result of lightning.

Another 11 fires had started by midday Tuesday, bringing the total number of fires currently burning in the province to 146.

Since April, there have been 928 fires and just over 500 of them have been confirmed to be naturally caused while another 364 were human caused.

MORE: The science and logistics of battling B.C.’s wildfires

Skrepnek said the numbers are consistent with previous years where roughly 60 per cent of fires are natural and 40 per cent are caused by people.

Bans on campfires for most of the province as well as the use of off-road vehicles on public lands in the Cariboo, Kamloops and Southeast fire centres remain in place as preventative measures.

“We remind everyone to remain vigilant … and just (be) extremely careful with any activity that could potentially spark a wildfire,” Skrepnek said.

Brent Barclay of the B.C. Ministry of Agriculture said an estimated 30,000 farm animals are within the fire-affected areas, and losses have not yet been tallied.

Roughly 500 ranchers have received support or information through emergency response crews and the province is spending $6 million on rebuilding fences along highways and Crown ranges to protect livestock and drivers.

Other efforts to support ranchers include relocating livestock or delivering feed, but Barclay said it’s unclear when ranchers and other agriculture workers can expect any financial compensation.

“The province is in negotiations or discussions with the Government of Canada around an agri-recovery program,” Barclay said. “I do not know when that will be completed but that is one of the first steps in the whole process to receive funding and that was initiated several weeks ago.”

Wildfires are also causing havoc for travellers through several areas of province and it threatens a main route between Alberta and British Columbia through Kootenay National Park.

Parks incident commander Jane Park said people should expect the Highway 93 to continue to be affected by the fire that has burned about 130 square kilometres of forest and brush.

Highways 97 and 99 in B.C.’s Cariboo region have also been closed off and on for weeks because of the wildfires.

People are also warned heavy smoke is causing poor visibility on roads that are remaining open and drivers should have their headlights on and watch out for any wildlife.

The smoke continues to pose a health risk for infants, the elderly and people with chronic health conditions as well.

An air quality advisory from Environment Canada that already covered the southern half of the province has now expanded north past Smithers in northwestern B.C.

Deputy provincial health officer Bonnie Henry said people with medical conditions are advised to stay in well-ventilated and air conditioned environments, keep necessary medication handy and have a plan to get treatment if they experience complications.

While there is still no significant rain in the forecast to douse the fires, Skrepnek said inflow winds from the ocean are expected to roll in by Friday and clear the smoke hanging over the south coast.

The change in weather could bring cooler temperatures and rain, but he said it could also cause fire-fuelling winds to pick up.