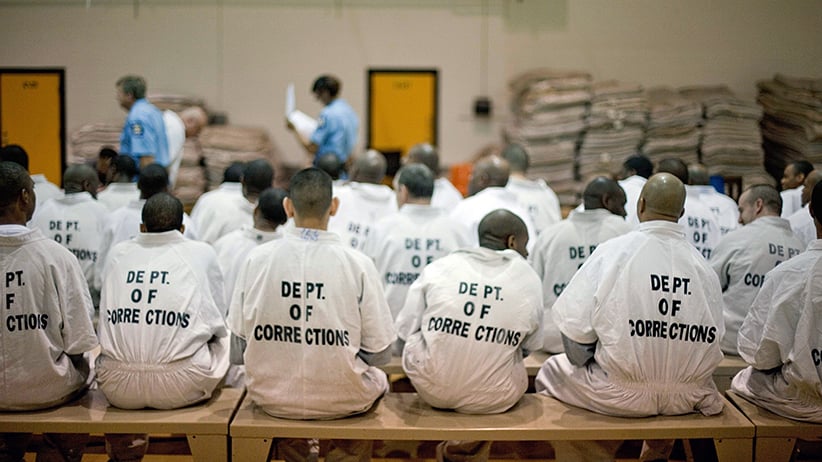 Newly arrived prisoners wait to be processed at the state prison in Jackson, Ga. (David Goldman/AP)

Is there any good news to be found in the horrifying cycle of violence and racial tension currently convulsing the United States and its justice system? Yes, but it may be a long time in coming.

Last week, U.S. President Barack Obama had the grim task of addressing two national tragedies on consecutive days. First, to comment on the protests arising from the shooting by police of two unarmed black men. Then to lament the deaths of five police officers in Dallas by a shooter claiming to be motivated by the earlier deaths. If there is a common, long-term solution to both calamities, it’s to be found in a redefinition of American justice.

The United States operates the world’s largest prison system. With just five per cent of the global population, it accounts for nearly a quarter of all incarcerated individuals. Such a scale of imprisonment is entirely out of proportion with crime rates, demographics, historical trends and the practices of other modern democracies. The U.S.’s current rate of more than 700 prisoners per 100,000 people is six times greater than the rate in Canada. Even more problematic, this American obsession with locking up its own citizens has a distinctly racial tone. Young, poorly educated black men are far more likely to find themselves in prison than any other segment of society. A third of all black men under the age of 40 without a high school diploma are currently in prison. The social impact of all this is obvious and enormous—excessive imprisonment destroys families, denies many adults the possibility of a productive life and stokes widespread resentment within the black community toward police and the rest of the American legal system.

Why has America done this to itself? “The unprecedented rise in incarceration rates can be attributed to an increasingly punitive political climate,” observes a 2014 U.S. National Academy of Science report into the phenomenon. Since the late 1980s, it has been politically rewarding for both Republicans and Democrats to create ever-harsher sentencing measures, including “three-strikes” provisions, higher mandatory minimums and the elimination of parole. Former U.S. president Bill Clinton’s 1994 crime bill was a signature moment in this bipartisan process. The same ratcheting effect was visible in Canada during the Stephen Harper era.

The past year, however, has witnessed widespread recognition of the problems created by this mania for incarceration, and the pressing need to reverse it. Many states have reduced mandatory minimums and created new routes through the justice system for drug offenders that do not consign them to a lifetime behind bars. In Congress, teamwork between Democrats and Republicans last year produced several sweeping reform bills to unwind the most damaging aspects of federal tough-on-crime legislation and apply such provisions retroactively to existing inmates. If passed, these measures would allow tens of thousands of minor criminals to live productive lives outside prison and give long-term relief to the tension currently animating race relations in the U.S. It would also save $722 million over 10 years. This combination of social and fiscal benefits explains the strong support from both sides of the political spectrum.

The sentencing-reform movement has also spurred a remarkable degree of candour in Washington. Paul Ryan, the high-profile Republican House leader, recently admitted his party’s previous fixation with tough-on-crime policies was a mistake. “Now we see the path of pathologies that have come from it. I think we’ve got to go back and fix it.” During her nomination campaign this spring, presumptive Democrat presidential candidate Hillary Clinton similarly apologized for her husband’s role in the 1994 crime bill. “I’m sorry for the consequences [of the crime bill] that . . . have had a very unfortunate impact on people’s lives,” she said during a debate with rival Bernie Sanders. (Sanders also supported the crime bill and now also repudiates it.)

And yet given the tension deliberately built into the U.S. political system, even all of the above has not delivered immediate success. A Senate fight over unrelated white-collar criminal issues derailed the momentum sentencing reform appeared to have in Congress earlier this year. Now, with presidential election season in full swing, it seems overly optimistic to hope such changes will see the light of day in 2016. This setback has been regarded by some advocates as the death of the entire sentencing reform movement. That seems overly pessimistic. The notion that American justice has become too punitive and insufficiently redemptive—and the social consequences of this mix—are now widely accepted. And the political climate has clearly changed. It seems inevitable that progress will come eventually.

Imprisoning entire generations of poor, uneducated urban minorities has not made America safer. It has done the opposite. However long it takes, this mistake must be corrected.