Ellen Page comes out and Bode Miller breaks down in tears 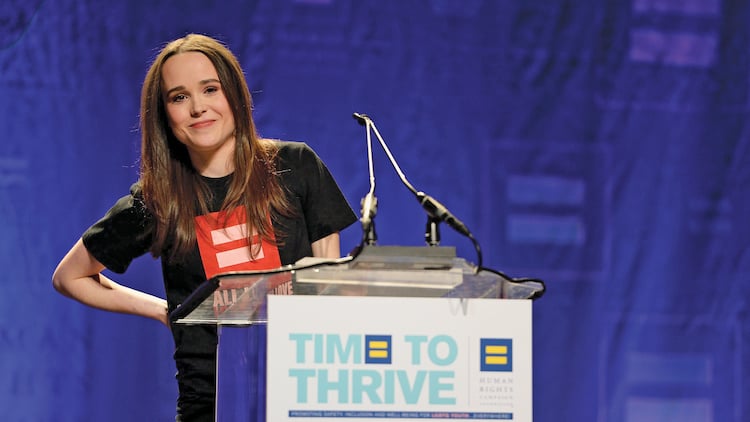 Tom Perkins
The Silicon Valley billionaire stirred up some mild disagreement last month with his statement that rising hatred of the rich was similar to Kristallnacht, the 1938 attack on Jews in Nazi Germany and Austria. Now the 81-year-old venture capitalist is branching out into other areas of philosophy, telling a crowd that wealthy people should have more of a say in the political process than the poor: “You pay a million dollars in taxes, you get a million votes.” Asked later if he was serious about the proposal, Perkins said only that, “I intended to be outrageous.” No argument there.

Bode Miller
American television’s Olympics coverage is obsessed with the personal stories of the athletes, and particularly their dead relatives. NBC may have overstepped things a bit in an interview with Miller, the U.S. Olympic skier whose brother died last year. Interviewer Christin Cooper repeatedly asked Miller if he wanted to win to honour his brother’s memory, finally causing the athlete to break down and fall to his knees crying, all in front of the camera. The interview quickly sparked outrage over the exploitation of an athlete’s personal tragedy for the sake of good TV. But you’ve got to admit, it was good TV.

Avery Edison
Last week, the British comedian endured an eventful, if not welcome, trip to Toronto to visit her girlfriend. First, she was detained at the border due to issues over her old student visa. Then, while awaiting the immigration hearing, the transgender Edison was mistakenly sent by border agents to a male correctional facility, only to be transferred to a female institution after a firestorm of protest erupted on Twitter. A day later she was let out of jail and sent home to the U.K., which her girlfriend, Romy Sugden, considered the next best thing to “let[ting] the visit proceed as planned.”

Piers Morgan
You edit a couple of British tabloids and it haunts you for life. Morgan’s busy CNN hosting routine was interrupted again when British police questioned him about the use of phone hacking to generate stories in the U.K.’s tabloid newspaper industry, where he worked until 2004. A police spokesman said that the journalist was talked to “in connection with suspected conspiracy to intercept telephone voice mails,” but
he wasn’t arrested. So now he can continue in the unimpeachably moral TV industry.

Ellen Page
The Canadian actress who made teen pregnancy a trending topic in the movie Juno is now doing the same for coming out of the closet in real life. While speaking in Las Vegas this weekend at a conference on teenagers and gay rights, the 26-year-old Halifax native admitted for the first time that she is gay, telling the audience that she “suffered for years because I was scared to be out,” and that by coming out, she may make it easier for other people to avoid that same suffering.