What happened when a troubled Indigenous school got equal funding? It started to thrive. 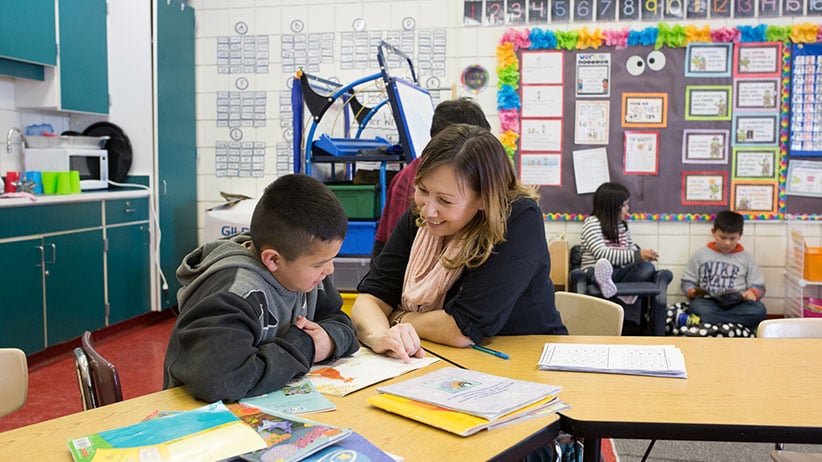 Zero per cent. In June 2010, that was the proportion of Aboriginal Grade 1 students studying at a reserve school in Manitoba who were reading at grade level. As for Grade 2? Another bagel: zero per cent. Same for Grade 3. And Grade 4? Three per cent—literally one child in a class of more than 30.

The school experiencing this dramatic turnaround is on the reserve of the Waywayseecappo First Nation, a 3½-hour drive west of Winnipeg. It has 330 students from kindergarten to Grade 8. In 2010, a one-off experimental agreement was reached between local leaders, the province and the federal government to provide the same level of funding to “Wayway” students as that received by students in nearby provincial schools. Overnight, the school received a boost of about $5,000 per student.

“Things have gotten better in a hurry,” says the 44-year-old principal, Troy Luhowy. Attendance is up. There are more teachers, and they stay longer. Classroom size has halved, to below 20. “Incident reports,” which staff typically only write up when a student does something quite disruptive, like hitting another student, are down 65 per cent.

Before, Waywayseecappo hemorrhaged talented teachers to the provincial system. “When a provincial school could offer $15,000 to $20,000 more in salary, and they didn’t have classrooms with 35 kids, our teachers who had an opportunity [chose to leave],” says Luhowy. “Now, students actually expect teachers to come back.” Three years ago an experienced teacher from a provincial school even transferred into Waywayseecappo. “I can guarantee you that never would have happened before,” says Luhowy.

For decades, successive Liberal and Conservative federal governments underfunded education on reserves. This year the Trudeau government budgeted an additional $460 million in Aboriginal education funding, and the amount is slated to increase every year, with an extra $1 billion planned for 2019-20. Don Drummond, an economist who has studied the gap in funding for Aboriginal students (in 2014 he estimated it was about 30 per cent) and recently advised the Assembly of First Nations in budget consultations with the Trudeau government, says that “in the most general sense, and I’m not saying this applies in any particular place or school, the budget has addressed the funding issue.”

The transformation at Waywayseecappo School, an anomaly that could be a norm, is a reminder of what is possible, and what has been lost. “Their results show that equity matters,” says Cindy Blackstock, a children’s advocate who led a legal effort that recently culminated in a finding by the Canadian Human Rights Tribunal that Canada was discriminating against First Nations children, by underfunding services. “When you give children a fair chance to learn in a good school that represents them, they will succeed,” she says.

Some 108,000 students attending Grades K-12 live on Canada’s reserves. If current trends continue, only four in 10 will graduate from high school. A recent survey of Waywayseecappo’s Grade 8 students showed that 72 per cent of them plan to attend university.

The tantalizing case of Waywayseecappo is not just about money. The school also joined the provincial school division, which has effects large and small for teachers and students. English and math teachers who once improvised from year to year now share more curriculum with the rest of the division and receive training alongside their provincial counterparts. (The school maintains autonomy to do things like teach Ojibwe instead of French.) Waywayseecappo also participates in division-wide testing, which has helped it target weakness and trumpet success.

Waywayseecappo now regularly hosts sports events. Provincial students come there for woodworking classes, where they churn out benches and shelves, and for a cosmetology program, where amateur hairstylists decorate their first clients. Last Thursday, a student drumming group from Waywayseecappo performed at a nearby school. “For so long our children stayed in our community and never really mingled with off-reserve kids,” says Waywayseecappo Chief Murray Clearsky. “I like seeing more of that. I don’t want them to be assimilated, but in today’s society we all have to get along.”

“We see each other more as people now,” says Marellia Cote, who has taught at Waywayseecappo since 1997. “Before, we were here, but it was like we were living on an island. Now we are building bridges between the communities.” The closest provincial school, Rossburn Collegiate, is a seven-minute drive away.