Erin Andrews' verdict will reverberate for hotels and guests 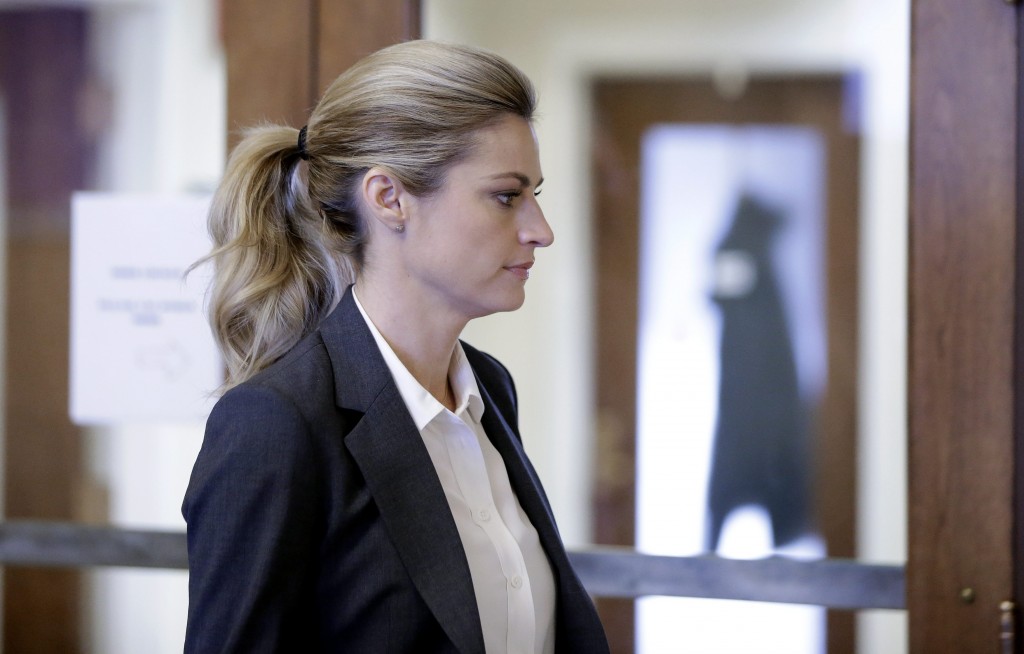 Sportscaster and television host Erin Andrews walks to the courtroom Monday, March 7, 2016, in Nashville, Tenn. Andrews’ $75 million lawsuit against the franchise owner and manager of a luxury hotel and a man who admitted to making secret nude recordings of her in 2008 is to be turned over to the jury Monday. (AP Photo/Mark Humphrey)

NASHVILLE – A jury verdict awarding $55 million to sportscaster Erin Andrews for nude videos of her taken through a hotel peephole will likely reverberate a long time for hotels and their guests, regardless of whether she ever collects it.

After the Nashville jury rendered its decision Monday, Andrews said it would “hold accountable those whose job it is to protect everyone’s safety, security and privacy.”

Legal experts tend to agree, saying that aside from Andrews’ celebrity status, the jury’s award reflects people’s expectation that hotels must honour their privacy.

And one of the jurors said that’s exactly what the panel hoped to do.

“We were sending a message out to the hotels and the chains to do better than what they’ve done,” said juror Noble Taylor, a sergeant for the Nashville Police Department. Taylor said he actually wanted to give Andrews more money because the Internet videos will never go away.

Hotels are considered private spaces, and most people can relate to Andrews’ experience as a profound violation of privacy, said Danielle Citron, a University of Maryland professor of law and online stalking and privacy expert.

“It’s pretty common for people to understand that undressing in a home or hotel room is something that’s sacred,” she said.

But one hospitality expert said hotels are already safe and called what the stalker did an anomaly. Hotels have been working for the past 15 years to better ensure safety for an ever-growing number of female business travellers, said Donna Quadri-Felitti, director and associate professor of hospitality management at Penn State.

In her often emotional testimony, Andrews blamed the owner and former operator of the Nashville Marriott at Vanderbilt for giving out her hotel room number to the stalker and not telling her that he had asked to be put in a room next to hers _ something the hotel companies denied.

She told jurors she was horrified that the stalker could alter the peephole in her hotel room and be able to get as much video footage of her as he did and blamed the hotel companies for ruining her life.

Andrews said she remains anxious and depressed as a result of the videos that have been viewed millions of times online.

Michael David Barrett, a former Chicago-area insurance executive, admitted to altering peepholes in hotels in Nashville and Columbus, Ohio, to shoot nude videos of Andrews before posting them on the Internet. He was later sentenced to 2 1/2 years in prison.

Most U.S. chain hotels aren’t actually owned by the company with the name on the building. Marriott, Hilton, Holiday Inn, Sheraton and most other major brands are typically paid to manage hotels on behalf of local owners or just franchise their name and brand to the owner.

For instance, the Nashville Marriott at Vanderbilt University where Andrews stayed was a franchised hotel. Marriott doesn’t own or operate it. The hotel is actually owned by West End Hotel Partners LLC and was operated by Windsor Capital Group, Inc.

All the major hotel chains have procedures about how best to run hotels that fall under their umbrella. But not all owners and managers follow those protocols as closely as they should.

As a general rule, front desk staff are never supposed to say a guest’s room number out loud. Instead, they write the number down on a piece of paper or a cardboard packet containing the room keys. Hotels also are not supposed to honour requests to stay next to or near guests but as the Andrews case shows, not all employees get the message. Hotel workers are instructed to honour security, but also must try to make guests’ stays enjoyable and to grant most reasonable requests.

Following the verdict, Patrick Nesbitt, CEO of Windsor Management Services, the former operator of the hotel, issued a statement apologizing to Andrews.

“(The stalker’s) actions remind us that criminals are always trying to circumvent our best security efforts and should serve as a call to action for the entire hotel industry to be diligent in ensuring our guests’ safety and privacy,” Nesbitt said.

The hotel industry will get the message, one legal expert says.

“I think this is a tremendous verdict for safety,” said Chris O’Brien, a law professor at the University at Buffalo. “I think that as a result of this verdict, what will happen is we will all be safer when we stay in hotels in the future.”