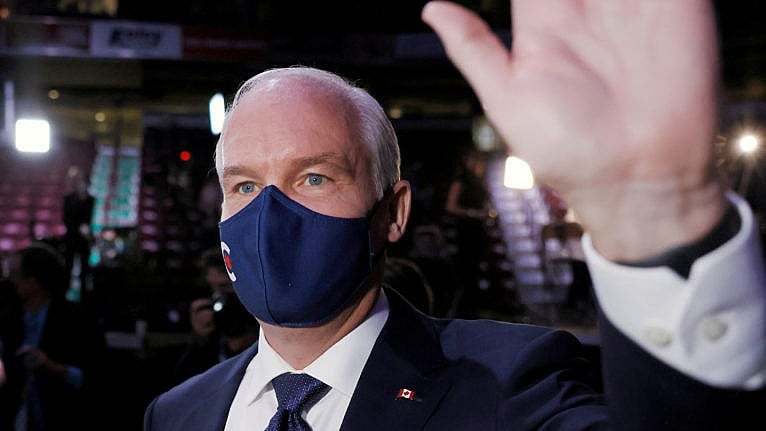 Friends, thank you. Merci beaucoup, thank you. Well, it was after one in the morning when I first addressed the nation as leader of Canada’s conservatives, so it is fitting that I address you late again.

At the start of this pandemic, I called for a Team Canada approach to combat COVID-19. Eighteen months later, our nation needs that more than ever.

[Translated from French] Canadians have spent too many sleepless nights worrying about the health of the people close to them, the loss of jobs and the future of their children. The pandemic has increased the small differences between us and it has also aggravated the division amongst Canadians. Unfortunately, this election has only made things worse. But I am here tonight, once again, more determined, to fight for our wonderful country. [End translation]

PAUL WELLS: A win’s a win

Five weeks ago, Mr. Trudeau asked for a majority. He said the minority Parliament was “unworkable.” But tonight, Canadians did not give Mr. Trudeau the majority mandate he wanted. In fact, Canadians sent him back with another minority at the cost of $600 million dollars and deeper divisions in our great country. Just days ago he said he would hold yet another election within 18 months if he didn’t get his way.

[Translated from French] A few days ago Mr. Trudeau was saying he would hold another election in 18 months if he didn’t get what he wants. [End translation]

Mr. Trudeau was hoping for a quick power grab. Instead, he has thrust us into what he has promised will be 19 months of perpetual campaigning. Our country is facing the most serious economic challenge since the Great Depression. Even before the pandemic led to record debt and deficit, investment and jobs were leaving Canada.

[Translated from French] Prices are increasing, from clothes to gas and everything. Inflation is at its highest level in 20 years and it is continuing to climb every day. Families have difficulty in making ends meet. But to face up to this challenge we have to work together. We have to continue the fight. [End translation]

For too long, we have been divided. For too long we have seen politicians pit region against region, neighbour against neighbour. But when we are divided, Canadians get left behind.

Mr. Trudeau thinks Canadians should endure 18 more months of divisive campaigning, so he can try once again to get the election result he wants. We need to heal the divides in Canada, not risk worsening them for selfish gains.

SHANNON PROUDFOOT: The election that disappointed everyone

A few months ago, I told Conservatives that our party needed the courage to change, because Canada has changed. Over the past 36 days we have demonstrated to Canadians that we’ve set out on a path to engage more Canadians in our conservative movement. One that addresses the challenges of today while advancing the dreams of tomorrow. Ours is a conservatism that dwells not in the past, but learns from it, to secure the future.

In the months ahead, as Mr. Trudeau gears up for yet another election, we must continue this journey to welcoming more Canadians to take another look at our party. More people voted for Canada’s Conservatives than any other party—and that’s a strength to build on. Our support has grown. It’s grown across the country. But clearly there’s more work for us to do to earn the trust of Canadians.

[Translated from French] We are the founding party of this country. We’re the party of its future as well. The Conservative party will beat the Liberals but only if the party continues to grow. [End translation]

[Translated from French] We must continue to gain the trust of Canadians. We’ve made progress. We’ve worked hard. But the progress has to continue. [End translation]

As we prepare for the election Justin Trudeau wants in another 18 months, we will take stock of what worked and what didn’t. And we will continue to put in the time to showing more Canadians that they are welcome in the Conservative Party of Canada. Above all, we must continue to show Canadians that whether you’re Black, white, brown, or from any race or creed, whether you’re LGBTQ or straight, whether you are an Indigenous Canadian or came to Canada five weeks ago or five generations ago, if French is your first or second language, whether you worship on Fridays, Saturdays, Sundays, every day or not at all—you are an important part of Canada and you have a place in the Conservative Party of Canada.

Friends, I’m standing here tonight because of the steadfast support of my true partner, the love of my life, Rebecca. Thank you for being my rock and my safe harbour. And I’m so glad more Canadians got to know the wonderful person you are these last five weeks. I also want to thank my children Molly and Jack for being my inspiration. It’s because of you that I believe so strongly in securing Canada’s future. My mother passed away when I was nine. But I know she is here tonight, because I see her in my daughter Molly, who shares her name. I’ve been so grateful to have my second mother to guide me to this very day. I’m thankful that she and my dad, who inspired me into public service, are here tonight, thank you.

[Translated from French] I’d like to thank my fantastic campaign team, thanks for your trust, thanks for your commitment to serving this big and marvellous country. Thanks to our incredible slate of candidates and to our fantastic volunteers as well. [End translation]

I joined the military at 18 to serve Canada and its people. And some of the people I served with are in this room tonight. I will never stop serving this great country. And my pride in Canada has deepened, these past five weeks as I’ve gotten to meet more incredible Canadians from all walks of life. My family and I are resolutely committed to continuing this journey for Canada.

[Translated from French] Tonight I talked to Mr. Trudeau and I congratulated him on a hard won campaign.[End translation]

I challenged the prime minister to put the unity of this country and the well-being of its people first. And I told him, if he thinks he can threaten Canadians with another election in 18 months, the Conservative party will be ready. And whenever that day comes, I will be ready to lead Canada’s conservatives to victory. Thank you, Canada, let’s get to work.