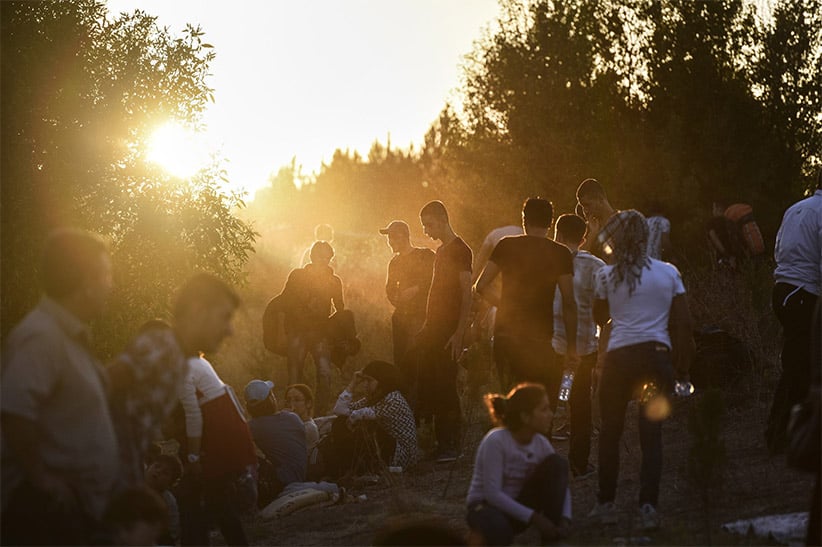 Syrian refugees and migrants gather near the highway on September 15, 2015, on their way to the border between Turkey and Bulgaria in the northwestern Turkish city of Edirne. Over half a million migrants have crossed the European Union’s border so far this year, up from 280,000 in 2014, the bloc’s Frontex border agency said on September 15, 2015 — but warned some people may have been counted twice. (BULENT KILIC/AFP/Getty Images)

BRUSSELS – European Union and Turkish leaders were locked in tense negotiations on Friday as the EU seeks to send tens of thousands of migrants back to Turkey and ease the pressure from a human emergency that is increasingly dividing the bloc.

But making a tough early stand, Turkish Prime Minister Ahmet Davotuglu said Ankara’s prime concern was the fate of almost 3 million Syrian refugees on its territory. At the same time, Davutoglu was looking for unprecedented concessions to bring the EU’s eastern neighbour closer to the bloc.

“For Turkey, the refugee issue is not an issue of bargaining, but values,” he told reporters, staking out the same moral ground that the EU has claimed throughout the crisis.

Davutoglu said he hoped that beyond helping the refugees, the deal would also “deepen EU-Turkey relations” with the approval of unprecedented access to Europe for Turkish nationals and the speeding-up of bogged-down EU membership talks. Negotiations were likely to stretch at least into Friday afternoon.

With more than 1 million migrants having arrived in Europe in a year, EU leaders are desperate to clinch a deal with Turkey and heal deep rifts within the 28-member bloc while relieving the pressure on Greece, which has borne the brunt of arrivals.

In the Idomeni camp on the Greek-Macedonian border, Muhammad Hassan, a Syrian from the devastated city of Aleppo, was looking for relief from the talks in Brussels and wondered why a continent of 500 million people could not deal with the situation.

“Europe have only 1 million” migrants, Hassan said. “How come it’s difficult?” he asked, comparing the EU to Lebanon, a nation of 5.9 million. “If a small country takes 3 million refugees and didn’t talk, how about Europe? It’s not difficult.”

The conditions in Greece and the Idomeni camp were called intolerable by the Greek government on Friday. Interior minister Panagiotis Kouroumplis compared the crowded tent city to a Nazi concentration camp, blaming the suffering on some European countries’ closed border policies.

During a visit to Idomeni Friday, Kouroumplis said the situation was a result of the “logic of closed borders” by countries that refused to accept refugees.

More than 46,000 people are trapped in Greece, after Austria and a series of Balkan countries stopped letting through refugees who reach Greece from Turkey and want to go to Europe’s prosperous heartland. Greece wants refugees to move from Idomeni to organized shelters.

The EU-Turkey plan would essentially outsource Europe’s biggest refugee emergency in decades to Turkey, despite concerns about its subpar asylum system and human rights abuses. Under it, the EU would pay to send new migrants arriving in Greece who don’t qualify for asylum back to Turkey. For every Syrian returned, the EU would accept one Syrian refugee, for a target figure of 72,000 people to be distributed among European states.

The United Nations secretary-general told German daily Bild in an interview published Friday that “building walls, discriminating against people or sending them back is no answer to the problem.”