Everyone hates a queue jumper. But are Canada's current vaccine queues fair?

Vaxx Populi: Experts wonder whether vaccination priorities can be changed to better protect those at highest risk 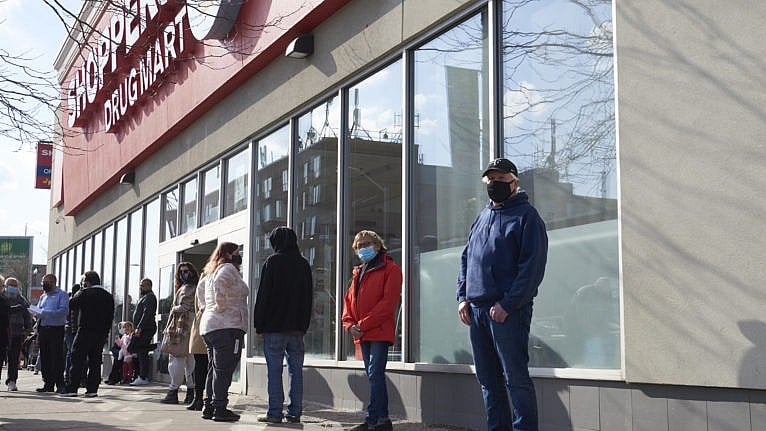 Customers wait to get into the Shoppers Drug Mart at Danforth and Coxwell as people in the age group of 60-64 line up on the other side of the store to await their Oxford-AstraZeneca COVID-19 vaccinations, in Toronto on March 11, 2021. THE CANADIAN PRESS IMAGES/Rachel Verbin

Queue-jumping is perhaps Canada’s ultimate social transgression, especially when it comes to our health care system. And butting into line is particularly egregious right now, when people are desperately waiting to be vaccinated against COVID-19. Perhaps the most famous example occurred in late January, when a Vancouver couple allegedly flew to Beaver Creek, Yukon, and claimed to be hotel workers in order to qualify for the Moderna vaccines being administered to a largely Indigenous community at a mobile clinic.

The United States has seen a steady stream of revelations that affluent, mostly white, areas have circumvented the rules to get vaccines ahead of their poorer, higher risk neighbours. On New Year’s Day, when vaccines were still in scarce supply, a Florida hospital system informed its biggest donors that they were eligible to get shots, Politico reported, while in Los Angeles, residents in affluent locales, including Beverly Hills, shared and used appointment booking access codes meant for residents in hard-hit Black and Latino communities.

In Canada, attention has been focused on who gets those first precious doses. There have been headlines about hospital executives and even employees on leave getting vaccinated before frontline workers, as well as staff not involved in patient care getting leftover doses at the end of the day.

RELATED: AstraZeneca vaccines: Why are some countries suspending its use?

Falsely accusing someone of queue jumping will similarly land you in trouble. On March 11, Ontario Premier Doug Ford levelled such an incorrect claim against NDP MPP Sol Mamakwa during question period, saying, “The member flew in [to] get his vaccine, so thank you for doing that and kind of jumping the line.” The premier was wrong.

At that time, vaccines were available for all “Indigenous adults in northern remote and higher risk communities (on-reserve and urban),” including Mamakwa, who, in addition to being eligible, had been invited by First Nations and public health officials in his northwest Ontario riding of Kiiwetinoong to very publicly get his doses in an effort to combat vaccine hesitancy. Steve Paikin, a journalist at TVO, who has covered Ontario politics for four decades, wrote that Ford’s attack was “the worst thing I’ve ever heard an Ontario premier say.” Amid an avalanche of criticism, Ford called Mamakwa to apologize.

Dark looks are directed at anyone gaming the system, especially those who are advantaged and connected and are perceived to be using their skills and influence to push ahead of those at higher risk. “99.99 per cent of us respect the rules. We want transparency,” says Dr. Zain Chagla, an infectious diseases physician at St. Joseph’s Healthcare in Hamilton, and an associate professor at McMaster University. ” ‘When am I going to get vaccinated? Tell me when it’s going to be, not just that it’s going to happen eventually.’ ”

RELATED: How many people a day could Canada vaccinate when going full-tilt?

The appearance of fairness can be the dividing line between success and failure in a crisis. To ensure no province felt it was getting short changed, doses have been distributed on a per capita basis, with those allotments—broken down by type of vaccine and by week of distribution—available for all to see on a federal government webpage.

Yet, there was also a specific carve-out from that per-capita framework that was approved by all leaders: everyone agreed that the North, which uses the Moderna vaccine, should immunize its isolated, high-risk population at rates much faster than areas in southern Canada. In early February, when the number of Moderna doses arriving in Canada was cut, the federal government redirected doses from New Brunswick and Nova Scotia to the territories; public muttering regarding the unfairness of the action was rebutted by local officials. “While we know this is concerning to hear, we also understand the federal government’s rationale,” explained Dr. Robert Strang, Nova Scotia’s chief medical officer of health. “It is to address the complexities and unique challenges in our northern neighbours. To do that, they need the support and cooperation of all provinces.”

Chagla wonders if, as Canada gets greater vaccine allocations amid still-high numbers of new cases, the nation should discuss altering its overall per capita vaccine queue, which, with the exception of front-line health care workers, is run by the provinces and territories largely on an “age-first” basis. In particular, Chagla queries whether “it makes sense prioritizing areas where the burdens are still high,” such as hotspots and among racialized and marginalized populations, saying, “The average 80-year-old in Scarborough faces a different risk of COVID than the average 80-year-old in St. John’s.”

RELATED: The J&J vaccine is approved in Canada. What do we know about it?

Chagla is not alone. In late February, Ontario’s COVID-19 Science Advisory Table recommended that the province’s imminent mass vaccination distribution strategy prioritize both age and disadvantaged and racialized urban neighbourhoods because of the “inequitable impact” of COVID-19 on such areas. It crunched the math and projected a double-pronged approach would prevent “an additional 3,767 cases of SARS-CoV-2 infection, and 702 hospital admissions, 145 ICU admissions, and 168 deaths from COVID-19 as compared to a strategy that prioritizes based on age alone.”

Ottawa adopted that strategy by starting its vaccination of the general 80-plus population with those living in seven high-risk neighbourhoods. The city’s online booking portal filtered out prospective residents by only allowing those in specific postal codes to make appointments.

Public health officials are also questioning the evenness of the distribution within provinces. That is an issue in the Greater Toronto Area, home to six million people, where there is significant disparity in vaccine availability between the area’s five public health units. Toronto, which, compared to its neighbours, has more high-risk people in the 80-plus category and more health care workers and front-line workers who are eligible for vaccines in the first stage of the program, is chafing at its allotment of doses. With a rising number of new COVID-19 cases, Toronto still has many 80-plus residents waiting for vaccines.

In contrast, on March 16, York Region, which has lower case counts, is so far ahead on its vaccine rollout that it expanded its vaccine eligibility list to include “all front-line health-care workers who interact with patients or clients in community care with low risk of exposure, non-acute rehabilitation and public health,” including those involved in holistic care and nutritionists. On March 17, it lowered its age requirement to 75 and older.

On the same day, Dr. Eileen de Villa, Toronto’s medical officer of health, was asked whether it makes sense for doses to be sent to public health units that need them the most, including Toronto, versus those in better situations, such as York. “One of the most effective methods by which to distribute vaccine, particularly if there are supply issues, [is] to direct those vaccines toward those who suffer the most serious outcomes,” she answered. “I also think there is pretty good evidence out there that suggests one of the best ways to manage the circumstances is to provide COVID-19 vaccine preferentially to those areas that have activity [new cases and outbreaks], so as to control the risk and to mitigate the risk in those surrounding areas that don’t have as much COVID-19 activity.”

On March 18, federal officials announced that more than two million cases of Moderna vaccine would be arriving in April, in addition to one million-plus Pfizer doses per week; there are also reports that 1.5 million AstraZeneca doses will be coming soon from the United States’ stockpile. As public health officials gear up their large-scale immunization campaigns, experts warn that more stories of queue jumping are inevitable. “Every mass vaccination campaign is going to have people that jump the line in one way or another,” says Chagla. At the same time, he says there needs to be flexibility to keep the process moving as well as a recognition that while people try to adhere to the rules, “there aren’t enough resources to audit every single person coming into the vaccine [clinic].”

“At the end of the day, these cases are going to be a small percentage of the overall cases, but they often dominate the news cycle because everyone feels that Canadians who are jumping the line are two values that don’t go with each other.”