Exclusive: The real story of baby Farhan, the child passed over barbed wire in Afghanistan

Shannon Gormley describes how the baby made it over the wall at the Kabul airport and journeyed to Canada. It is also a tale of how Western democracies revealed the nature of their fight in Afghanistan through their abandonment of it. 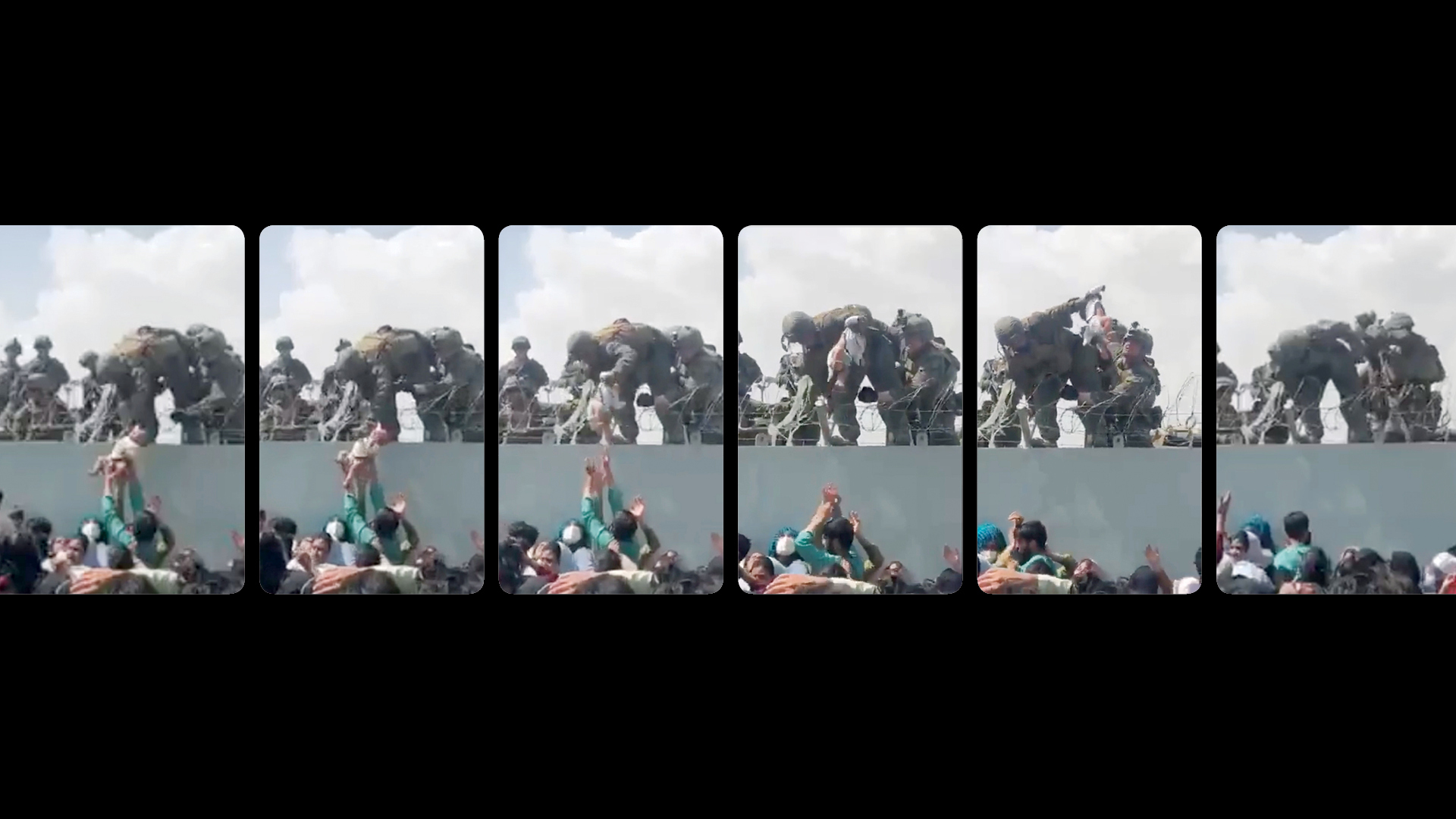 Multiple stills from the viral video showing a baby being lifted over the Kabul Airport wall in August, 2021. (@OmarHaidari1/Twitter)

Five U.S. soldiers perched above a wall looked on as a colleague reached over the barbed-wire coils to receive the fragile cargo from a tall bearded man. Millions of people around the world would later fixate on this footage from Kabul—the soldiers were taking somebody’s baby, in an unbuttoned white onesie and diaper that became ripped in the jostling of the crowd.

Appearing in news reports around the world this became a defining image of America abandoning its longest war, ceding Afghanistan to the oppressive Taliban. But in the moment, pressed between the wall and the suffocating crowd, Asghar and Zahra looked up and watched their almost four-month-old son make it one step closer to where they all wanted to wind up, amid all this gathering chaos. Closer to safety, closer to Canada.

The couple pushed towards the tall metal gate in the wall, knowing their baby was by now on the other side of it.

An American soldier stood inside the gate, brandishing a heavy wooden pole, six feet long and six inches thick, employing it to varying effect as a battering ram.

“Push back!” the soldier yelled. “Push back, push back!” Asghar managed to shout. “My baby is inside!” The soldier appeared not to understand.

Watching the viral video of baby Farhan going over the barbed wire half a world away, reporter Shannon Gormley didn’t know who the baby was. But she would later recognize somebody along the wall wearing a light green tunic with a distinctive checked pattern. It was Asghar. And there also was Zahra, with her red backpack and black headscarf.

Gormley, an award-winning investigative feature writer and Maclean’s contributing editor, who has reported throughout the Middle East, Asia and Europe, met Asghar three years earlier when she was in Kabul as a journalist. Asghar ran a non-profit freestyle BMX club for youth and Zahra was the club’s first female member.

Last August, Gormley received a message from Asghar (Maclean’s agreed to not use the family’s surname for safety reasons). “Almost 90 per cent of Afghanistan is taken by Taliban,” he wrote. “I and my family must leave Afghanistan immediately as they are against my beliefs and activities.” 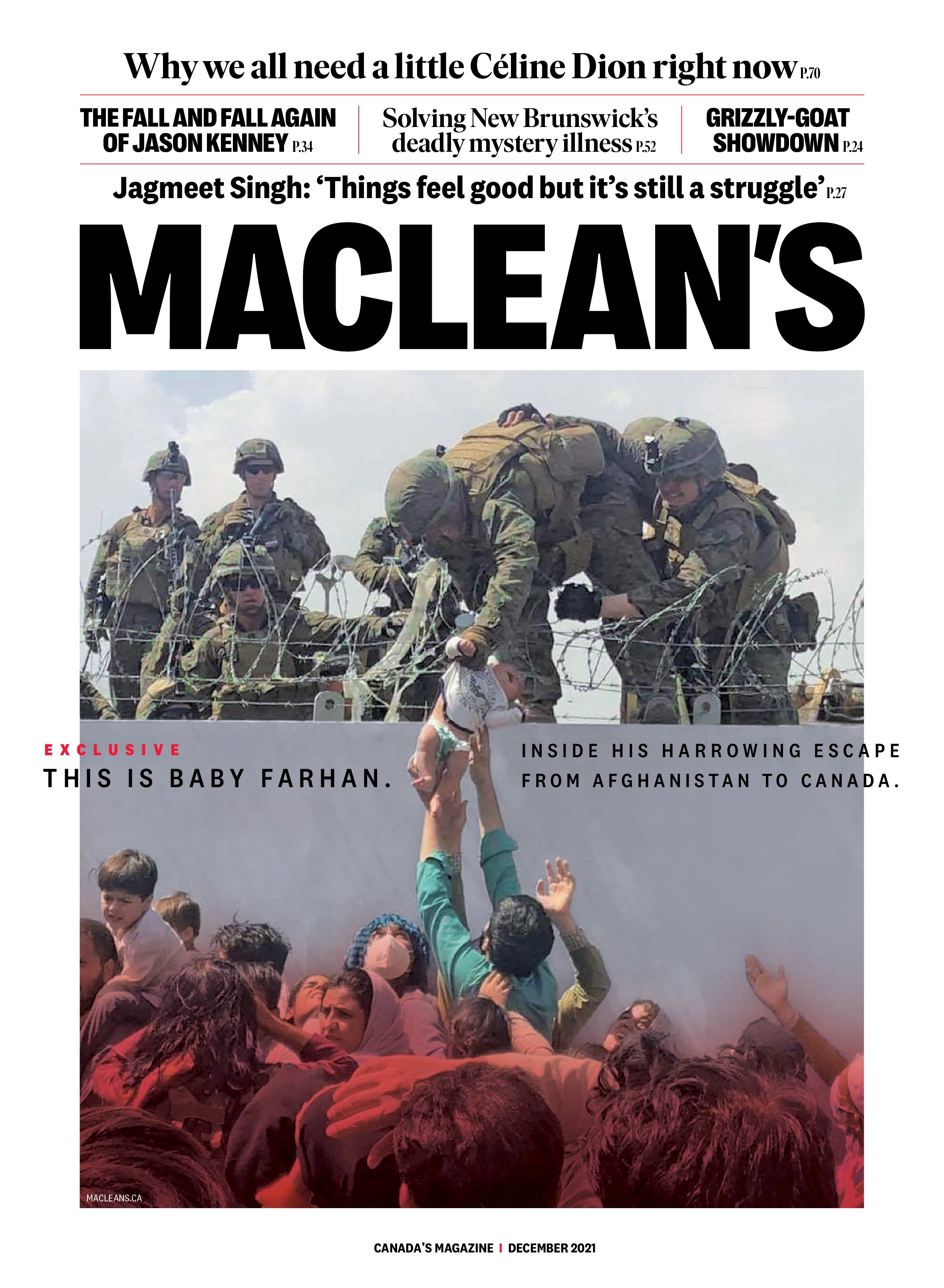 In the newest issue of Maclean’s, Gormley tells the world-exclusive story of baby Farhan, who was previously misidentified by some U.S. and U.K. news outlets. (Their identities were confirmed in the video by third party experts for Maclean’s, using forensic photo analysis.)

The feature, soon to be published on Macleans.ca, describes how the baby was passed over the wall at the Kabul airport—and all that happened afterwards. It is a story of how Western democracies revealed the nature of their fight in Afghanistan through their abandonment of it.

As the Taliban moved to close off Afghanistan to the world and countries like Canada raced to get people out, Gormley and fellow journalists tried desperately to arrange safe passage for Asghar, Zahra and Farhan.

Subscribers can read the story in the December 2021 issue of Maclean’s. It’s also available on Apple News+ now and will be on newsstands starting next Thurs., Nov. 11.