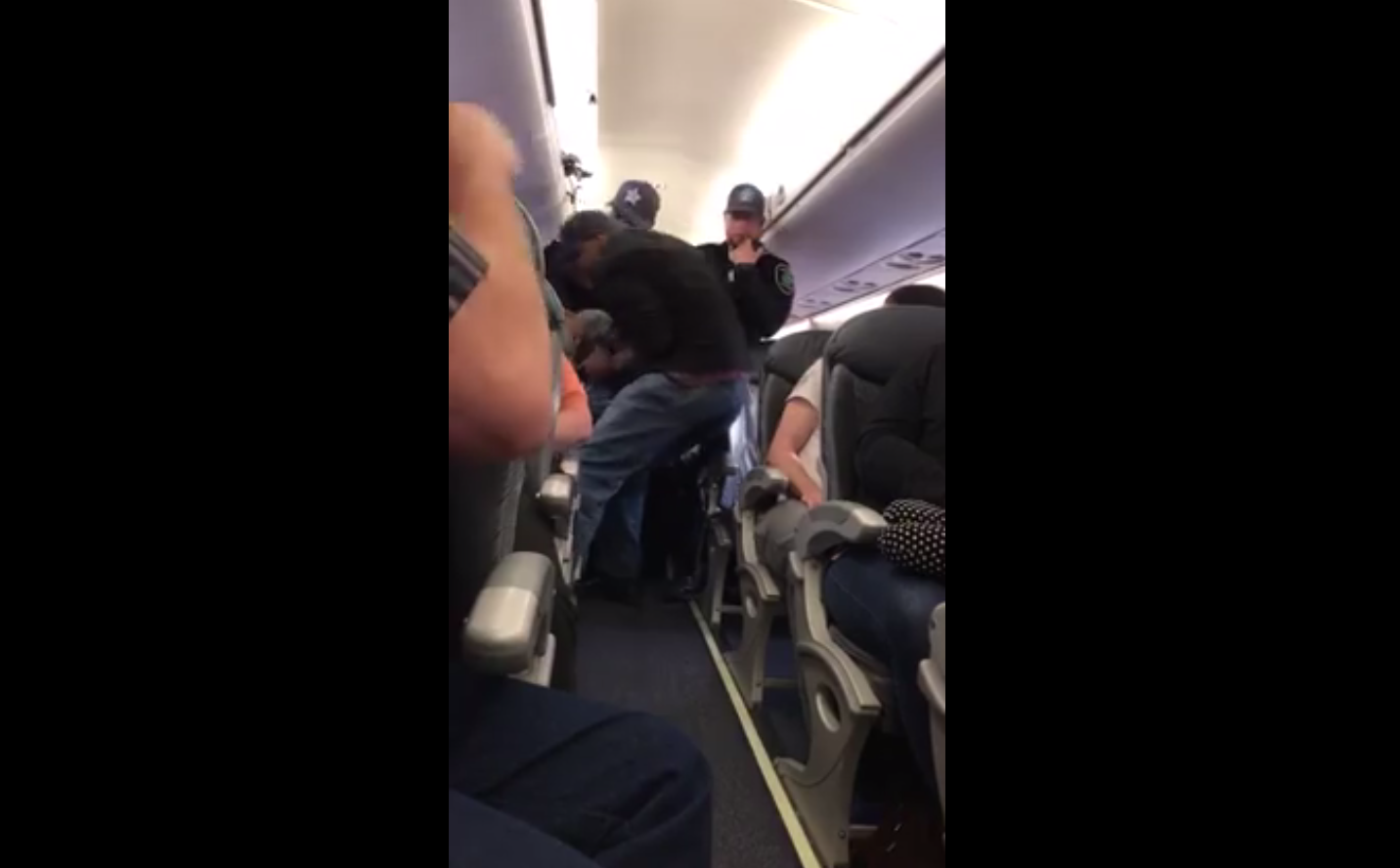 In this still from a passenger video, a man is seen being dragged from his seat on a United flight by security.

CHICAGO _ Minutes after a passenger recorded a video showing security officers dragging a man off an overbooked United Express flight at O’Hare Airport, a smaller snippet of video showed another troubling scene.

There stood the passenger who had been dragged on his back to the front of the plane, appearing dazed as he spoke through bloody lips and blood that had spilled onto his chin.

The treatment of the passenger on Sunday night drew outrage and scorn on social media and anger among some of the passengers on the flight as the unidentified man was thrown off the plane. The video seen around the world could prompt a backlash against United from passengers as the busy summer travel season begins.

And for Chicago, it is another public-relations nightmare, adding to its reputation as a city unable to curb a crime wave in some neighbourhoods.

The furor grew from a common air travel issue – an overbooked flight. United was trying to make room for four employees of a partner airline, meaning four people had to get off the flight to Louisville.

#flythefriendlyskies my husband was on that flight. Screw you United!! @united pic.twitter.com/4EcxrMy5jZ

At first, the airline asked for volunteers, offering $400 and then when that didn’t work, $800 per passenger to relinquish a seat. When no one voluntarily came forward, United selected four passengers at random.

Three got off the flight, but the fourth, a man who said he was a doctor and needed to get home to treat patients on Monday, refused.

Three men, identified later as Chicago Aviation Department security officers, got on the plane. Two officers tried to reason with the man before a third came aboard and pointed at the man “basically saying, ‘Sir, you have to get off the plane,”’ said Tyler Bridges, a passenger whose wife, Audra D. Bridges, posted a video on Facebook.

One of the security officers could be seen grabbing the screaming man from his window seat, across the armrest and dragging him down the aisle by his arms.

“We almost felt like we were being taken hostage,” said Tyler Bridges. “We were stuck there. You can’t do anything as a traveller. You’re relying on the airline.”

While Munoz said he was “upset” to see and hear what happened, “our employees followed established procedures for dealing with situations like this.”

Chicago’s Aviation Department said the security officer who grabbed the passenger had been placed on leave.

“The incidence on United Flight 3411 was not in accordance with our standard operating procedure and the actions of the aviation security officer are obviously not condoned by the department,’ the agency said in a statement.

After a three-hour delay, United Express Flight 3411 took off without the man aboard.

Airlines are allowed to sell more tickets than seats on the plane. They routinely overbook flights because some people do not show up.

It’s not unusual for airlines to offer travel vouchers to encourage people to give up their seats, and there are no rules for the process. When an airline demands that a passenger give up a seat, the airline is required to pay double the passenger’s one-way fare, up to $675 provided the passenger is put on a flight that arrives within one to two hours of the original. The compensation rises to four times the ticket price, up to $1,350, for longer delays.

When they bump passengers, airlines are required to give those passengers a written description of their compensation rights.

Last year, United forced 3,765 people off oversold flights and another 62,895 United passengers volunteered to give up their seats, probably in exchange for travel vouchers. That’s out of more than 86 million people who boarded a United flight in 2016, according to government figures. United ranks in the middle of U.S. carriers when it comes to bumping passengers.

ExpressJet, which operates flights under the United Express, American Eagle and Delta Connection names, had the highest rate of bumping passengers last year. Among the largest carriers, Southwest Airlines had the highest rate, followed by JetBlue Airways.