George Piro of the FBI's Miami field office, who once met daily with Saddam Hussein, will now try to uncover Esteban Santiago's motives. 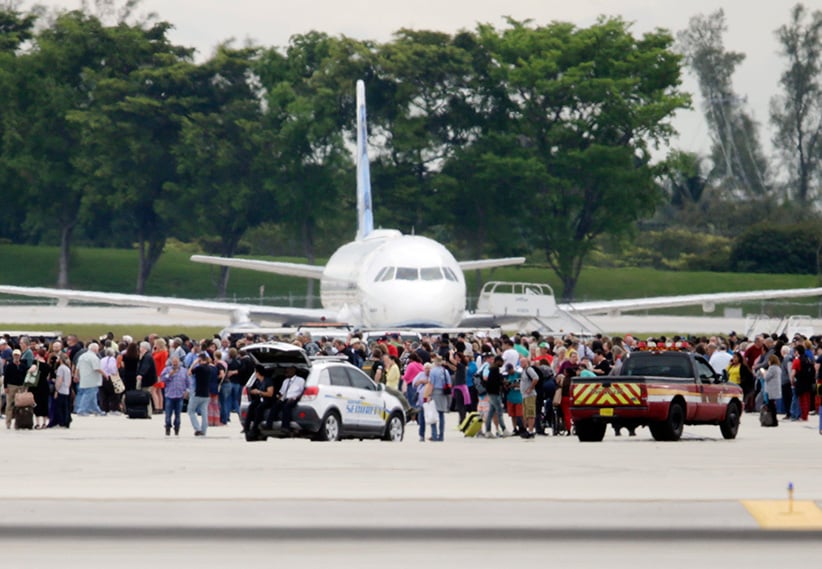 People stand on the tarmac at the Fort Lauderdale-Hollywood International Airport after a shooter opened fire inside a terminal of the airport, killing several people and wounding others before being taken into custody, Friday, Jan. 6, 2017, in Fort Lauderdale, Fla. (Lynne Sladky/AP/CP)

FORT LAUDERDALE, Fla. — The FBI agent who interrogated Saddam Hussein alone for months after the former Iraqi leader’s capture is now leading the investigation into the Florida airport shooting rampage blamed on an Iraq war veteran.

George Piro, special agent in charge of the FBI’s Miami field office, was Saddam’s sole interrogator beginning in January 2004. In previous interviews, Piro has said Saddam did not know his true identity – the Iraqi leader called him “Mr. George” — and that he posed as a high-level envoy who answered directly to then-President George W. Bush.

Now the 49-year-old Piro, a native of Beirut, Lebanon, fluent in Arabic and Assyrian, is in charge of the FBI investigation into the shooting at Fort Lauderdale-Hollywood International Airport that left five people dead and six wounded. Federal prosecutors have charged Esteban Santiago, 26, with airport violence and firearms offences that could bring the death penalty if he is convicted.

In announcing the charges filed Saturday, Piro said his thoughts are with the victims and their families.

“I want to ensure these families that law enforcement is working tirelessly in order to ensure justice is served,” he said.

Piro, an FBI agent since 1999, moved with his family from Lebanon to California’s San Joaquin Valley as a teenager. After high school he enlisted in the Air Force, then became a police officer for a decade in Ceres, California, followed by a job as an investigator in the local prosecutor’s office.

Once he joined the FBI in Phoenix, Piro was one of only a handful of Arabic-speaking agents — a group that suddenly was in great demand after the Sept. 11, 2001 terror attacks and the subsequent U.S. invasions of Afghanistan and Iraq. In 2003, Piro was promoted to the FBI’s Counterterrorism Division at headquarters in Washington, leading to his work as Saddam’s interrogator.

In later interviews, including a 2008 appearance on CBS’s “60 Minutes” program, Piro said he met daily with Saddam in a windowless room and worked to gain his trust by becoming his only provider of necessities and such things as paper for Saddam to write poetry.

Eventually, Piro said Saddam confirmed that Iraq did not have weapons of mass destruction prior to the U.S. invasion but might seek them in future to deter Iran and other threats. Saddam also denied any links to al-Qaida and Osama bin Laden, Piro has said.

Saddam also liked to brag about how he escaped U.S. airstrikes and capture, according to Piro.

“What he wanted to really illustrate is . . . how he was able to outsmart us,” Piro told “60 Minutes.” “He got rid of his normal vehicles. He got rid of the protective detail that he travelled with, really just to change his signature.”

Saddam was later tried and executed by hanging in December 2006.

Santiago, the airport shooting suspect, also served in Iraq in 2010 with the Puerto Rico National Guard as part of an engineering battalion, guard officials said. Santiago later served in the Army Reserves and Alaska National Guard.

Since taking the top Miami FBI job, Piro has overseen work in more domestic areas such as health care fraud, identity theft and tax fraud, Ponzi schemes and mortgage fraud — all areas where South Florida is among the nation’s leaders. Bank robberies, violent street gangs, public corruption and smuggling of humans and drugs round out much of the work for the Miami office’s roughly 1,000 agents and employees.

Since Friday’s shooting, Piro has been careful to say no evidence linking Santiago to terrorism has been found but such connections have also not been ruled out.

“It’s way too early in the investigation. We’re looking over all of his social media, things like that. It’s giving us a picture of the individual, but it’s way too early for us to rule out anything,” Piro said Saturday. “We’re pursuing all angles on what prompted him to carry out this horrific attack.”