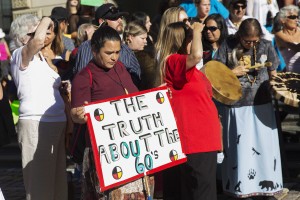 Sixties Scoop survivors and supporters gather for a demonstration at a Toronto courthouse on Tuesday, August 23, 2016. THE CANADIAN PRESS/Michelle Siu

TORONTO – An extraordinary 11th-hour government attempt to stop a judge from ruling on a bitter eight-year legal fight over the so-called ’60s Scoop is under fire from the plaintiffs and observers, who denounced it Wednesday as galling and unprecedented political interference in judicial proceedings.

In a blistering note to Ontario Superior Court, the plaintiffs urge Justice Edward Belobaba to reject the Liberal government’s request to put his decision on ice one week before he was expected to issue it.

“It is difficult to provide a measured and professional response to this request by new counsel for (Canada),” Morris Cooper, one of the plaintiffs’ lawyers said in an email to Belobaba obtained by The Canadian Press.

“This unprecedented, unilateral request by the defendant (amounts to) shameless audacity, impudence, gall, or effrontery.”

Belobaba reserved his decision late last week on whether the federal government is liable to about 16,000 at-risk indigenous children in Ontario taken from reserves and placed in non-aboriginal homes from 1965 to 1984. The plaintiffs, who seek $1.3 billion in damages in the class action, maintain they suffered a devastating loss of cultural identity.

The federal government has fought tooth and nail against the plaintiffs, arguing it has no liability. However, in a major turnaround last week, Indigenous Affairs Minister Carolyn Bennett made a vaguely worded announcement in which she said the government now wanted to negotiate a national settlement to bring a close to what she called a “dark chapter” in Canada’s history.

This week, Barney Brucker, a prominent Justice Department lawyer, wrote Belobaba to say the government wanted to discuss the “potential benefits to the negotiations that an abeyance of your decision might have” in light of Bennett’s announcement.

Brucker’s note, also obtained by The Canadian Press, indicated the government was prepared to file a formal court motion to block the ruling if no agreement could be reached.

The plaintiffs, however, made it clear they wanted no part of such discussions.

“We have faced eight years of litigation and appeals of purely procedural matters and well over a year of effort to get this first ruling on the merits of this claim,” Cooper wrote the justice. “The class members and victims of the ’60s Scoop deserve a decision.”

Belobaba, who had indicated his intention to rule on or about Feb. 16, showed little immediate appetite for wading into the fray.

“It goes without saying that in the normal course, and absent the consent of both parties, a decision is released when it is scheduled to be released,” Belobaba wrote the parties.

In a statement Wednesday, Bennett said the government wants to move “these issues” out of courtrooms and instead negotiate with victims of “historic wrongs” in good faith.

“In this case, the government is asking, again, to sit down with all parties to discuss the best way forward to achieve a fair settlement for the claimants, and to advance reconciliation between indigenous people and the government of Canada,” she said.

Marcia Brown Martel, the lead plaintiff in the class action, slammed what she said was just another government delaying tactic to avoid accountability for its actions. Bennett’s words of reconciliation, she said, ring hollow.

“When it comes to a court process, they have not acknowledged the wrongs, the detrimental history, that they have committed upon our people, our aboriginal children in this country,” Brown Martel said. “They are trying to circumvent that legal process through political manoeuvring.”

In an interview, Cooper called it “mind-boggling” that a litigation lawyer would contact the judge hearing the case without the knowledge or consent of the opposing party.

While ’60s Scoop claims have been filed in several other provinces, those are independent of, and not nearly as advanced as, the Ontario action launched eight years ago.

The government request is unheard of, Cooper said.

“No explanation has been offered to you as to why that proposed negotiation process, if indeed bona fide — which remains far from clear— would in any way be nullified by the timely release of your decision,” Cooper told Belobaba.