Image of the Week: The aerospace giant thinks these Max 8s will fly again by October. Does anyone else? 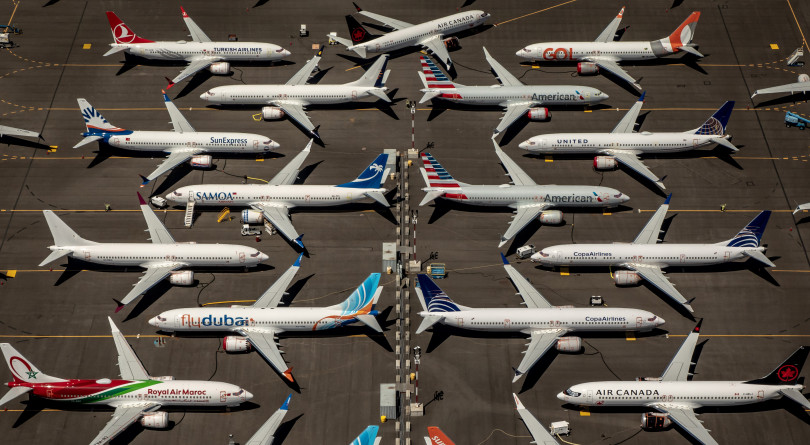 Boeing 737 Max 8 aircraft sit parked at Boeing Field in Seattle, Washington, USA, 21 July 2019. The Boeing 737 Max 8 was grounded by aviation regulators and airlines around the world in March 2019 after 346 people were killed in two crashes. (Gary He/EPA)

The eye-popping symmetry in this photo of grounded Boeing 737 Max 8 planes in Seattle may be the only good thing the aerospace company has going for it right now. The company reported a quarterly loss of more than US$3 billion this week, its second-largest decline in two decades, stemming almost entirely from the fallout of the Max 8 grounding. After two horrific crashes that took place in the span of five months because of a software malfunction on the planes (killing a total of 346 people *), the model has been relegated to lots like this one at Boeing Field. And for now, at least, they’re staying there. While Boeing officials have said they expect the airliner to be okayed for take-off once again come October, the U.S. Federal Aviation Administration has refused to confirm any timeline at all. What’s more, Boeing has said it’s considering pausing production of the plane if its return to the runway is significantly delayed beyond the October target date that nobody but the aircraft maker seems to share. Meeting that deadline would entail fixing the flawed software, retraining pilots on the revised software and then coordinating with the affected airlines—all of which have had to significantly change schedules because of the grounding. If you look closely, you’ll see that Air Canada is emblazoned on a couple of these mothballed planes. The Canadian carrier had 24 737 Maxes in its fleet and was expecting more this summer; it has had to extend leases on aircraft while speeding up other aircraft purchases to make up for the loss. Even if the planes in this parking lot are given a second chance, it’s hard to say whether travellers will readily climb aboard without fear that it could plunge back to the ground at any terrifying moment.