Nicolas Anelka said the bizarre gesture was meant to honour Dieudonné, but the Football Association wouldn't have it 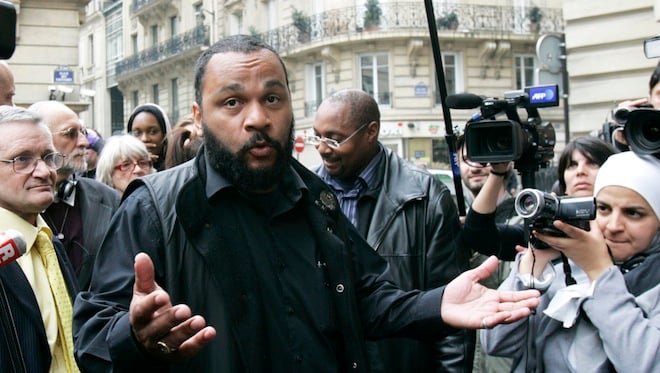 West Bromich Albion Football Club striker Nicolas Anelka muscled past two defenders as he closed in on opposing West Ham United’s net, booted the ball past the rushing keeper, and then triumphantly trotted away with his right arm extended downward and his left held across his chest. And that’s when the trouble began—for the footballer, and the French comedian who invented the strange salute he made.

Few watching the game in Britain late last year likely had any idea what Anelka was doing, but in his native France the gesture—known as la quenelle—was already infamous. It was created by Dieudonné M’Bala M’bala, a French comedian with a history of attracting controversy and allegations of anti-Semitism. Dieudonné, usually known only by his first name, was born in France of a French mother and Cameroonian father. For a time performed with Jewish comic Élie Semoun. The two poked fun at and undermined ethnic stereotypes. Off stage, he campaigned against racism and ran for office against a far-right National Front candidate.

For reasons that are unclear, Dieudonné politics shifted sharply to the right. His performances became increasingly polemical and focused on Jews. He described Holocaust commemoration as “memorial pornography” and began associating with Holocaust deniers, 9/11 conspiracy theorists and the right-wing ideologues he used to oppose. Jean-Marie Le Pen, former leader of the National Front, is reportedly godfather to one of Dieudonné’s daughters. French politicians regularly condemn Dieudonné, and he has been fined numerous times for defamation, insult and provocation to hate, and racial discrimination.
None of this has dampened his popularity in France. A recent performance in Bordeaux attracted 5,000 spectators. Fans say they like Dieudonné because of his irreverence, because he champions ordinary Frenchmen against the elites who keep them down. But it can be difficult to discern where contempt for the French establishment ends and hostility to the Jews who supposedly inhabit it begins. And that quenelle salute reveals darker currents running through his support base.

The salute is a sort of mash-up of an inverted Nazi hail and an obscene French gesture. Dieudonné says it means, roughly, “up yours.” It appears to mean more than that for many who have lately taken to posting photographs on the Internet of themselves making the gesture in front of synagogues, Holocaust memorials and the Auschwitz death camp. Anelka, the footballer, says he simply wanted to honour Dieudonné, a personal friend. The Football Association charged him with making an “abusive” sign just the same. He faces a five-match ban if found guilty. Dieudonné had planned to visit Anelka to show his support. But Britain’s Home Office last weekend barred him from entering the country.

For his part, Dieudonné denies he is anti-Semitic. Or, as he used to put it in a segment of his stand-up routine that French authorities have since ordered him to clean up: “Why should I have to choose between Jews and Nazis? In all that business, I am neutral.”