Politics Insider for Sept. 2, 2021: The end of the Ford-Trudeau truce; the Liberal platform drops; and preparations for the French-language leaders debate 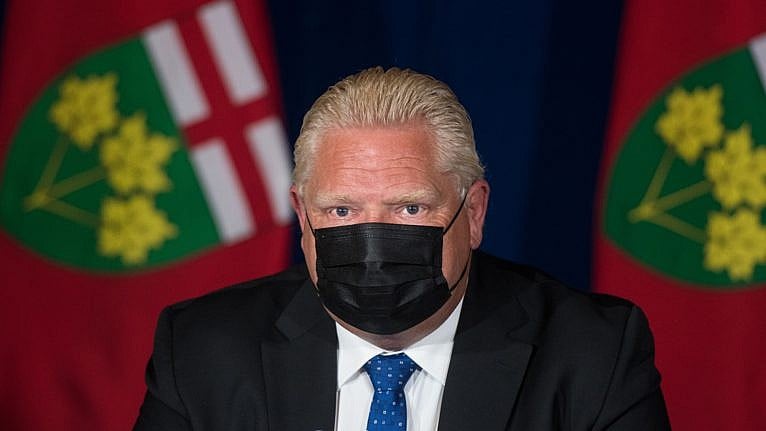 Doug Ford announced Wednesday that Ontarians will need to show a vaccine certificate to enter indoor restaurants, gyms, theatres, and banquet and meeting halls beginning Sept. 22, the Globe reports. Ford, who previously opposed such a system as divisive, nonetheless blamed Ottawa for failing to set up a federal system: “Justin Trudeau has told us that they will not be rolling out a national vaccine passport while their election is ongoing. We can’t wait any longer.”

Justin Ling has a Twitter fact check on that. This attack appears to signal the end of the non-aggression pact between Ford and Trudeau, although Ford said he isn’t looking to pick a fight.

Victimhood: One person who is looking to pick a fight over vaccines is Trudeau, by linking the anti-vax protesters with Erin O’Toole, which Andrew Coyne, writing in the Globe, finds opportunistic on Trudeau’s part.

Bad polls for Liberals: Another day another poll showing the Liberals sliding behind the Conservatives. Ipsos finds CPC at 32, LPC at 31, NDP at 23. Darrell Bricker of Ipsos: “The Liberals should be very worried about where they are in the campaign because all they’ve done since the start is lose momentum and lose support.”

It differs substantially from the Conservative plan released earlier in this campaign in that it proposes to invest more in Liberal priorities — such as efforts to fight climate change, Indigenous reconciliation and the arts and cultural sector — while promising tighter restrictions on firearms and new money for provinces that ban handguns. The party is also promising to restore employment to pre-pandemic levels and go “beyond” its previous pledge to create one million jobs by extending the Canada Recovery Hiring Program — which subsidizes businesses that hire new workers — until March 2022. It also accuses the Conservatives of being “opposed to support for workers and businesses.”

What about camping? in Maclean’s, Paul Wells has a look at the platform and finds an interesting exercise in marketing, but also a blueprint for incoherence and lousy government. He reminds us about the 2019 platform promise to subsidize camping for “75,000 less privileged children and their families.”

On Wednesday, Justin Trudeau released the Liberals’ 2021 platform, and it contains no mention of camping. The question of 2019—why on earth would you subsidize camping?—has been replaced by the question of 2021: why, having decided to do it, would you then decide not to?

Drug policy: Also in Maclean’s, Justin Ling is disappointed by what the platform does not contain: a new approach to the drug crisis:

For the past year, Trudeau has bent over backwards to laud and celebrate public health experts. On the campaign trail, he has admonished his competitors for their supposed distrust of science and expert advice.  Yet, when it comes to Canada’s other public health crisis, he constantly ignores and dismisses that advice.

Every 49 minutes: If you doubt the toll this failure is taking, have a look at Michael Friscolanti’s long read in Maclean’s, exploring the personal stories of the families who lost loved ones.

“It could be your kid tomorrow,” says Robin Lukash, whose son, David, overdosed on July 14. “That is the reason I’m willing to talk about it: because something has to change.”

Today, more than a year later, Canada’s overdose crisis rages on, minute by minute, coast to coast. In B.C., toxic drugs have already ended 851 lives in the first five months of 2021—a pace that would eclipse last year’s record high—while early numbers from Alberta and Saskatchewan point in the same grisly direction. National modelling projections, released in June by PHAC, show that opioids could kill up to 2,000 people each quarter this year. That would equal 8,000 more bodies, or nearly one overdose death every hour of 2021.

Under fire: The NDP and Conservatives both attacked Trudeau Wednesday over his government’s handling of allegations of inappropriate behaviour by MP Raj Saini, saying it’s a Liberal pattern of turning a blind eye to such complaints, the Globe reports.

CBC News on Tuesday reported that concerns were raised with Mr. Trudeau’s office dating back to 2015 about Raj Saini’s behaviour toward young female staffers, which included four allegations of unwanted sexual advances or inappropriate comments. The Globe and Mail has not independently verified the allegations. Mr. Saini said in a statement on Tuesday that he has never acted inappropriately toward staff or constituents. He said he was only made aware of one allegation and that the individual did not to pursue a formal or informal complaint. Mr. Saini added that a third-party review of his office conducted through the House of Commons “found that nothing arose regarding concerns of harassment in the office.”

TVA debate tonight: The French-language TVA debate, which last election proved a career-limiting outing for Andrew Scheer, is on tonight. Chantal Hebert has the tee-up you need.

ICYMI: Anyone who missed Radio Canada’s Sunday night leader-grilling exercise can get caught up on the highlights, en français, from Emmanuelle Latraverse in Le Journal de Montreal, who thought O’Toole did well. (Translation.)

His Olympian calm, his iron discipline allowed Erin O’Toole to win. If we remember one thing so far, it’s that he has a plan. A plan for the economy, for mental health, to increase health funding. Will his environmental plan make people forget the 15 years of stubborn conservatism in minimizing the importance of climate change? Who knows?  But Erin O’Toole has a heavy liability: the CPC dinosaurs. Climatosceptics, anti-abortion, pro-firearms, they undermine the credibility of his campaign, as he tries to convince the Conservatives have changed. And what about the vaccination passport? He can only hope that the Premier of Ontario will announce his soon to make him immune to Liberal attacks.

Anglophones can get caught up by reading Tasha Kheiriddin’s breezy roundup in the Post.