Though spending is less, the government said it is also taking in $2.7 billion less in revenue in the fiscal year

By Shawn Jeffords and Paola Loriggio, The Canadian Press November 15, 2018 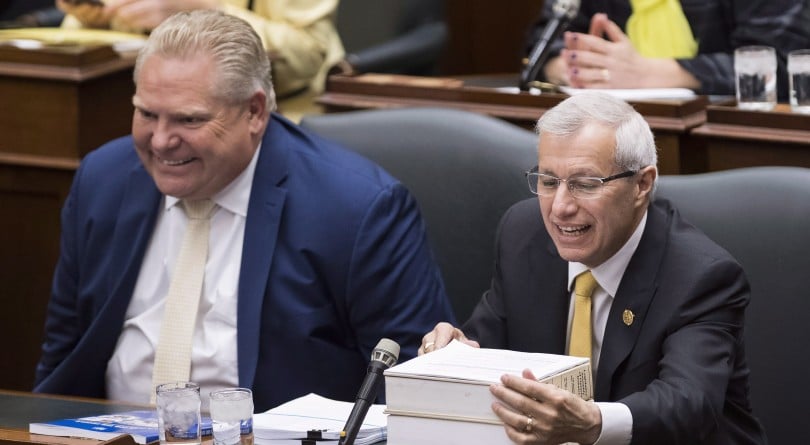 Ontario’s Progressive Conservative government says it has cut the province’s deficit by $500 million, bringing the figure down to $14.5 billion in its first few months in office.

The change is announced in the government’s Fall Economic Statement for 2018-2019, its first major fiscal update since winning the spring election.

“The fiscal hole is deep,” Finance Minister Vic Fedeli said in presenting the document to the legislature on Thursday afternoon. “The road ahead is not an easy one and will require difficult decisions. Everyone across the province will be required to make sacrifices, without exception.”

The government said it has made progress on cutting the deficit by finding $3.2 billion in efficiencies in operations, including a hiring freeze across the public service.

The belt-tightening measures laid out also include rolling the positions of three independent officers — the environmental commissioner, the child and youth advocate and the French language services commissioner — into the offices of the auditor general or the provincial ombudsman.

Government staff could not say what will happen to those working in the eliminated offices, but Premier Doug Ford has consistently promised that no jobs would be lost as a result of his cost-cutting.

Plans for a French-language university have also been cancelled, though the government could not immediately say how much money the move would save.

Though it is spending less, the government said it is also taking in $2.7 billion less in revenue in the fiscal year — including $1.5 billion attributed to the cancellation of cap and trade.

More than $300,000 in lost revenue is attributed to cancelling planned tax increases, including one that would have raised taxes for small businesses, the document says.

The Tories had said the previous Liberal government left a $15 billion deficit, a figure disputed by critics, who said it includes spending promised by the Liberals but cancelled by the current regime.

While the document mentions returning the province’s budget to balance, it does not spell out how long it will take to achieve that goal.

“Our path forward is clear, and that is why it is important to maintain our resolve to pursue fiscal discipline and ultimately restore our books to balance,” Fedeli said.

The fiscal update also promises to eliminate income tax for those earning less than $30,000 a year. The government says the tax cut offsets its decision to scrap a planned increase of the province’s minimum wage that was set to take effect next year.

Critics, however, have said raising the minimum wage to $15 an hour as the Liberals had planned would give low-income workers more money than the income tax cut would save. An independent financial analysis came to a similar conclusion.

The tax cut is expected to cost the province $495 million in lost revenue, the document says.

The update also pledges to expand hours of operation at Beer Store and LCBO outlets across the province, allowing them to open seven days a week until 11 p.m.