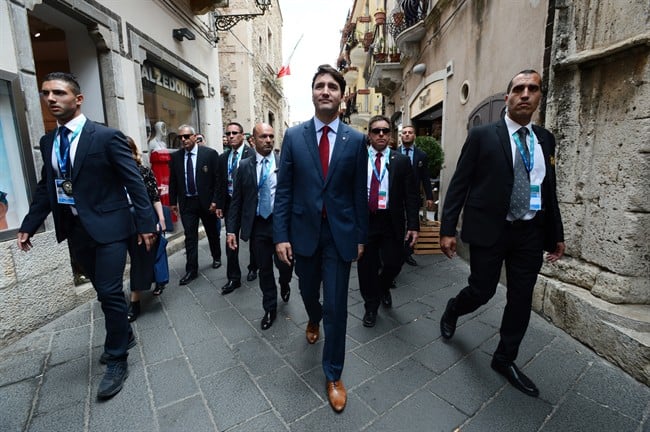 Prime Minister Justin Trudeau makes his way through the streets of Taromina, Italy during the G7 Summit on Friday, May 26, 2017. THE CANADIAN PRESS/Sean Kilpatrick

TAORMINA, Italy – Canada is planning to champion the benefits of free trade and action on climate change at the G7 Summit in Taormina, Sicily, even as U.S. President Donald Trump tries to steer the world in another direction.

“There are clearly some areas where the Canadian position may not be universally embraced,” Foreign Affairs Minister Chrystia Freeland told reporters Friday morning.

A senior Canadian government official with intimate knowledge of the negotiations says the Paris Agreement on the fight against climate change, which Trump might back out of, and international trade remain major sticking points that will likely keep talks going through the night.

The official noted there are also likely to be gaps between the leaders on migration policy, particularly when it intersects with the issue of international security.

The official also said that aides in the White House are directly involved in the talks.

There are four new leaders, including Trump, at the summit this year.

The others are French President Emmanuel Macron, British Prime Minister Theresa May and the host of the summit, Italian Prime Minister Paolo Gentiloni.

But rather than a clash of old versus new, the two-day meeting is expected to be a battle between Trump and everyone else, at least on the issues of trade and climate change, as everyone tries to arrive at a consensus.

The official said that if no consensus is reached on a hot issue like climate change, the text of the final communique will likely reference that fact, rather than remaining silent.

Freeland, though, said Prime Minister Justin Trudeau, who now has the third-most seniority, will be looking to find common ground among the seven leaders around the table while standing firmly behind Canada’s positions on those issues.

She said the same thing goes for free trade.

“Canada believes very strongly in a rules-based international trading order. We’re a trading nation and we’re always going to stand up for that,” she said.

Trudeau was expecting to find an ally on that front in Macron, with whom he had a bilateral meeting Friday.

The prime minister is also set to meet with Trump briefly on Saturday. The Liberal government had been hoping to secure a meeting in order to continue to press its case on the North American Free Trade Agreement and other big cross-border issues.

RELATED: Patriotism is a disastrous way to make trade policy

Freeland says one thing the leaders can agree on is that they must work together to counter the threat of violent extremism, which is expected to play a bigger role in the talks in the wake of Monday’s deadly terrorist attack on a concert arena in Manchester, England that killed 22 people.

“This is truly a global struggle,” Freeland said.

“It is truly one in which we are working arm in arm with our allies.”

Freeland noted the G7 is now planning to issue a separate statement on the issue of terrorism and radicalization, while working the other issues into the main communique.

While the summit in Japan last year produced a 32-page agreement, the official said the text to be released Saturday will be much shorter and strategic.

It will also have a narrower focus than the wide-ranging discussions on everything from innovation in African countries to the empowerment of women and girls that leaders are taking part in would otherwise suggest.

Canada will be hosting the G7 summit next year and an official says Trudeau is expected to make inclusive growth and gender equality the major themes of the gathering at a remote luxury resort in the Charlevoix region of Quebec.