As demand for STEM-related jobs increases, the lack of women in such fields could have serious economic consequences 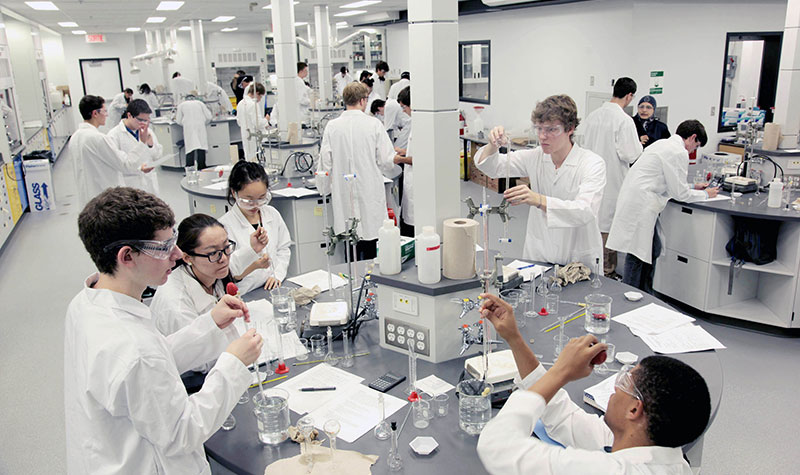 MONTREAL – In the basement of McGill University’s engineering building, Elizabeth O’Meara punches the word “engineer” into a Google Image search and watches the screen fill with pictures of men in construction helmets.

“It’s kind of disgraceful,” O’Meara tells her audience, a group of Grade 11 students she’s hoping to encourage to pursue her own field of study. “Not everyone wears hard hats in engineering.

“And also, they’re all dudes. They’re also all white.”

O’Meara, a 19-year old first-year bioengineering student, is well aware she doesn’t represent the face of most engineering hopefuls.

Her presentation is part of a wider effort to change the fact that women remain vastly under-represented in the science, technology, engineering and math (STEM) fields, despite sustained efforts to close the gap.

More than four in 10 Canadian women aged 25 to 34 had a bachelor’s degree or higher in 2016, compared with less than 33 per cent in 2006, according to the latest batch of census numbers released Wednesday by Statistics Canada.

However, of those women with an earned doctorate, only about one-quarter opted for architecture, engineering and related technologies, the numbers show. And among those younger Canadians with bachelor’s degrees or higher, five times as many men as women opted to follow a path towards science, technology, engineering or math.

Considering the fact that overall, fewer than 20 per cent of working-age Canadians with post-secondary degrees, men and women alike, chose the STEM path, the female ranks are small indeed

As demand for STEM-related jobs increases, the lack of women in such high-paying fields could have serious economic consequences, a report released earlier this year by TD Economics suggests.

“It will be difficult to close, or possibly even further narrow, the overall gender wage gap if women fail to make stronger inroads,” it read.

MORE: Why there are still far too few women in STEM

The gender divide persists, despite years of efforts by advocacy groups, universities and individuals to tackle systemic gender bias and promote the importance of STEM.

These efforts range from pink-coloured building blocks for toddlers and science camps geared towards girls to a governmental threat to strip funding from research universities that fail to address diversity issues.

“It’s really upsetting, and it’s something we’re thinking about a lot,” said Ketra Schmitt, a professor at Concordia University’s Centre for Engineering in Society.

Experts struggle to explain why women continue to flock to fields such as education and health sciences – women accounted for 92.7 per cent of young nursing graduates with bachelor’s degrees in 2016 – while more men choose engineering.

Studies suggest the reasons are multiple and complex, including systemic gender bias, a tendency for girls to underestimate their own math abilities and a lack of role models at the top levels.

The TD Economics report found that even after graduation, women disproportionately end up in lower-paying technical roles than higher paid professional ones.

Schmitt said researchers often sum up the problem using the metaphor of a “leaky pipeline” that sees girls and women drop out at every step, beginning in elementary school and continuing into their professional lives.

The student group O’Meara represents, called Promoting Opportunities for Women in Engineering (POWE), is trying to create a supportive community for female students that also offers mentorship and networking opportunities to help them break into the field.

MORE: Why Canada’s digital economy rests in the hands of our girls

They also do outreach work with local elementary schools, high schools and junior colleges, including O’Meara’s recent presentation and workshop.

Part of the group’s mission is to look at the lack of female role models found at every level of the profession.

“When you don’t have role models, that affects everybody further down on the chain,” said Taylor Lynn Curtis, a second-year software engineering student who co-presented with O’Meara.

They’re hoping to make a difference to girls like 16-year-old Maya Esar, who attended the presentation with the rest of her class.

Esar hopes to go on to study computer science, eventually translating her interest in programming and art into a successful career designing websites or video games.

Despite being the only girl in her school’s coding club, the teen says it’s never occurred to her to think of programming as just a “guy thing.”

“Nobody ever told me it was.”