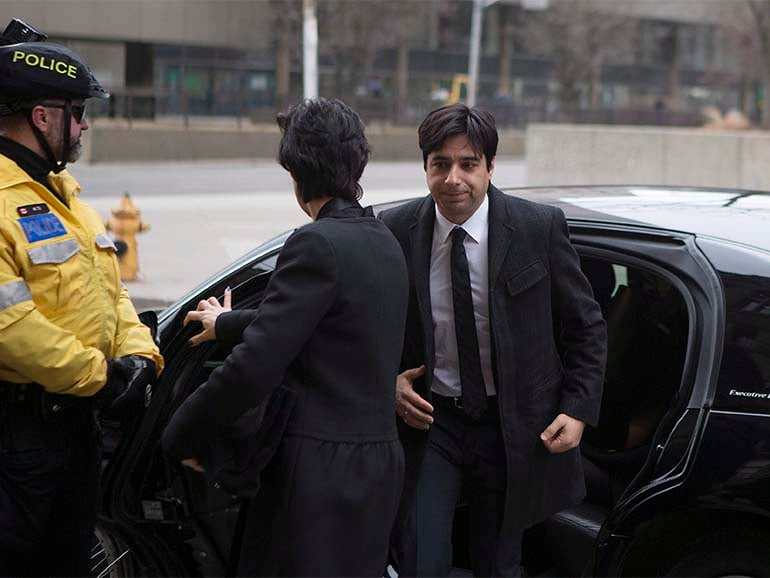 If there was any grace to be found in the demolition derby that marked day five of the Jian Ghomeshi sexual assault trial, it was that the testimony of a third complainant provided an evocative metaphor that described both the day’s wreckage and how sexual assault cases can self-immolate: “Jenga tower.” That was the phrase Lucy DeCouture, complainant number two, used to encourage the third and final witness to come forward and report to police in December 2014. “Your statement will be part of a Jenga tower,” DeCoutere wrote in one of roughly 5,000 messages exchanged between the two women between October 2014 and September 2015. One can only assume DeCoutere was thinking of some sort of impenetrable fortress being constructed by dozens of women coming forward, and not an actual Jenga Tower—which is a construction of interlocking wooden blocks vulnerable to collapse when one of its pieces is removed.

That’s certainly what the court watched today as defence lawyer Marie Henein handily dismantled the witness’s testimony, plucking away at so many loose pieces that it was easy to lose track. The day began with lawyers in camera before the judge, discussing new disclosures that the third complainant had made at end of day Friday. Like DeCoutere, the witness—whose identity is protected by a publication ban—came forward on the eve of her testimony with information she’d not given the police or the Crown. This in turn gave rise to concerns that the witness defied court rules, and listened to media coverage, which made her realize the defence was ready to clobber her for statements left unreported, emails unmentioned.

From Chatelaine: How complainants are prepared in sexual assault trials

Though less resilient on the stand than the previous two witnesses (the judge called a 20-minute break at one point so she could collect herself), echoes of previous testimony reverberated. The witness’s relationship with Ghomeshi was short-term; the alleged incident was sudden, unexpected and seemed out of character; she tried to find ways to  justify the behaviour. And, despite “red flags,” she saw him again. “I’m notoriously known for given people second, third and fourth chances,” the witness boasted, as if this was a womanly good thing.

In an often-wavering voice, the witness, whose identity is protected by publication ban, said she knew Ghomeshi from the Canadian arts community for years before they met more personally in July 2003 when she performed in a festival in a Toronto park. Ghomeshi came up behind her and rested her elbows on her shoulders when she was speaking with teenage girls after one performance, she told the court. He joked: “We’re engaged.” It made her uncomfortable, the witness said: “It was taking ownership in some way.”

Still, she went out with Ghomeshi another night. During dinner, she was put off when he insisted on sitting at the edge of a patio. “He was very aware of who noticed him,” she said. Later, they returned to the park and “made out” for several minutes seated on a bench. This was a detail she hadn’t told police; she disclosed it to the Crown for the first time last week. Then, she testified, “I felt his hands on my shoulders, then his teeth, then his hands were on my neck and he was squeezing.” He put his hand on her mouth, smothering her, she said. She had difficult breathing and and felt “not safe,” she testified. “I felt like some switch” in his personality occurred. She said she didn’t remember the exact details of how the encounter ended: “To the best of my recollection I got in a cab and went home … My instinct was to get out of it quickly.” She did remember his hands around her neck, she told the court: “That’s difficult to forget.” There was no discussion of consent, she testified.

Related: What we’re not seeing at the Ghomeshi trial

She’d go out with Ghomeshi again, this time to a restaurant and a bar. “What were you thinking?” Crown prosecutor Michael Callaghan asked. “He’s very charming,” the witness said. “You second-guess yourself. You think, ‘Maybe I misread it.’ ” While at the bar, they bumped into a writer Ghomeshi knew who asked how long the two had been together. “We’re not dating, we’re f–king,” Ghomeshi said, a remark the witness said she found “humiliating.” “It wasn’t true,” she said. Then, she told the court, they went to her place where she gave him a hand job. “Why?” Callaghan asked her. “It was a Jekyll-Hyde thing going on,” she said, saying again she likes to give people second chances. She said she didn’t tell police because she wasn’t specifically asked, because she didn’t think it was “relevant,” and also because it was “embarrassing.”

The witness testified she saw Ghomeshi again in Toronto at a party within the next few weeks. After he warned her that a close friend of hers was manipulative and trying to control her, they fell into bitter argument, she testified. “You’re f–king crazy,” she said she told him. “Don’t call me again.” On cross-examination, Henein was caustic: “And that was the time you realized he was sick?” Ghomeshi called the day after, and she spoke with him, the witness testified. She also told the court they had contact in later years; she’d emailed him with an invitation to see musical acts she was managing. “He’s a personality … a name in the business,” she explained.

During her cross-examination, Henein plucked the blocks out one by one, dismantling the narrative structure. The witness’s report to police was used to undermine her credibility: “You tell police: ‘He was a creep, I always felt unsafe around him,’ ” Henein charged before discussing their sexual encounter. The lawyer aggressively questioned why she didn’t tell the police: “You lied,” she said. “I omitted,” the witness countered, as if that was not, as Henein put it, deliberately misleading.

The biggest focus, though, was placed on the witness’s bonding with DeCoutere—“insta-sisters” they called themselves. In court today, the witness denied discussing details of the case with DeCoutere. Henein then exposed that, in fact, the two combed over every aspect of the case—meetings with Crown lawyers, speculation about defence strategies, chatter over new allegations. DeCoutere encouraged the witness to meet with her lawyer and publicist, and to do media before going to police. The defence lawyer intimated the two conspired to take down Ghomeshi—whom they referred to as “the Persian princess.” “It’s time to sink the prick … I’ll do whatever possible to put this predator where he belongs,” one communication read aloud by Henein claimed. The defence unearthing emails, texts and thousands of Facebook threads might have come to a surprise to the court; it shouldn’t have been a shock to the women who sent them.

Related: The rising importance of ‘digital debris’ in trials

The witness countered that she was motivated to go to police only after she saw a “a pattern” of behaviour in Ghomeshi, she testified: “I wasn’t an isolated incident.” She told the court that, at the time, she didn’t know what Ghomeshi allegedly did to her was assault: “I didn’t think there was anything to press charges against.”

Henein didn’t have to work all that hard for the bricks to come tumbling. How could the witnesses not have known that their court testimony couldn’t contradict their police reports, that Ghomeshi’s famously formidable lawyer would ferret out the facts, even ones they didn’t think relevant? The day’s events point to the fact a judicial system needs the same sort of graphic messaging for complainants in sexual assault cases that airport security provides travellers—those signs that list what cannot be taken on board: no firearms, no explosives, no knives. Here, though, bigger social messaging is required: that one must tell police everything, even if it’s embarrassing, even if it the complainant doesn’t fit the textbook victim mould; that there’s no such thing as a predictable response; that there’s no place for shame. It might take some time to make sense of all of this, though. Today, all we saw was the rubble.