Ghomeshi Day 7: A girlfriend brings the outside world to court

The Crown's lone outside witness as a reminder of what an insular, hermetic process the Ghomeshi trial has been 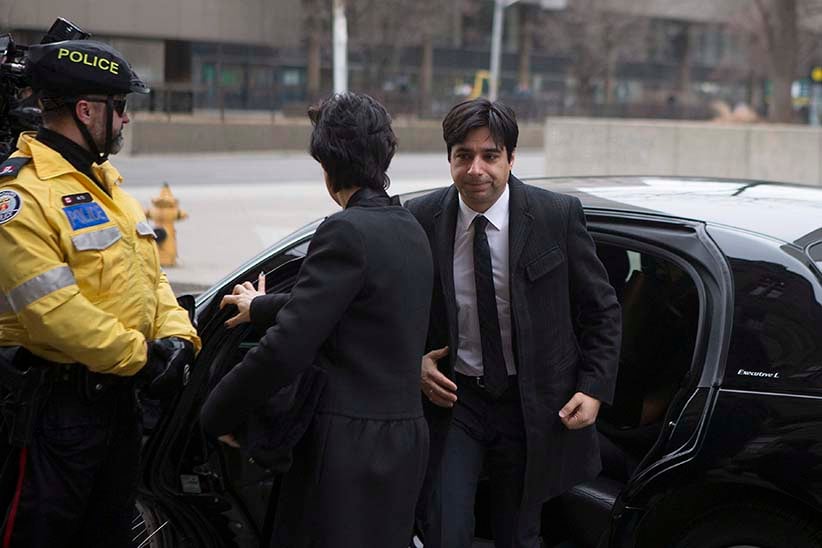 Female friends talk. And one thing they talk about (down to the most minute details) is the post-date post-mortem. That fact converged with judicial process on Wednesday when Exhibit 44, a 33-page transcript of the Nov. 24, 2014 statement made to Halifax police, was submitted into evidence. In it, actress Sarah Dunsworth recalls DeCoutere calling her “maybe a week” after what she described as “a really bad and weird” date with Ghomeshi a decade earlier. Dunsworth, who appeared with DeCoutere on Trailer Park Boys, said DeCoutere “described going to his house, and that he had ended up putting hands on her neck and choking her.” She recalled DeCoutere telling her the attack “came from out of nowhere,” adding, “she thought that it was really weird, and it freaked her out.”

The testimony, ruled admissible by Ontario Court Justice William Horkins yesterday, was a reminder of what a hermetic process the Ghomeshi trial has been—and how little of that process has focused on the actual alleged sexual assaults. Defence lawyer Marie Henein’s aggressive cross-examinations of the three complainants, a sort of insular triangulation, has dominated; the focus has been on their behaviour after the alleged sexual assaults and the various ways they misrepresented it. As the Crown wound up its case on Wednesday it became clear Dunsworth’s would be the only other testimony; no other witnesses will be called. The first witness testified she’d gone to the home of a friend, highly distraught, the night Ghomeshi punched her three times. That friend was not called. Nor will the court hear the “he said” part of the so-called “she said-he said” dynamic underlying sexual assault trials: Ghomeshi will not testify.

Crown prosecutor Michael Callaghan succeeded in having Dunsworth’s testimony admitted on Tuesday; he argued it would “rebut” the defence’s repeated allegations that DeCoutere’s account of the assault was a “fabrication.” She’d told a friend immediately after the assault, Callaghan told the court; Dunsworth’s testimony also counters the defence’s charge that DeCoutere jumped on a bandwagon seeking “fame” and “attention” after other women came forward with similar allegations with Ghomeshi in late 2014. Dunsworth was originally slated to appear in court until bad weather in Halifax kiboshed that; then her Skype wasn’t working. So the statement had to suffice.

In it, Dunsworth makes mention of a topic given shockingly little scrutiny in the trial: consent. There was none, she told police. DeCoutere said she and Ghomeshi “haven’t discussed it before-hand, or that it wasn’t part of any you know, sex play, or anything.” She recalled how DeCoutere was laughing when she called to ask: “Is this normal?” referring to Ghomeshi choking her. “Lucy is not a big dater,” Dunsworth told the police by way of explanation of why her friend might even consider such behaviour within dating etiquette bounds. “No, that’s—it’s really not normal,” Dunsworth assured her friend. She didn’t mention DeCoutere saying that Ghomeshi had slapped her three times, as she testified in court last week.

In her testimony, Dunsworth indicated confusion about timing. She said DeCoutere had phoned a week or so after the assault that DeCoutere told police occurred in July 2003; she was “definitely here in Nova Scotia” and “[DeCoutere] was living in Toronto,” Dunsworth said. Yet emails between Ghomeshi and DeCoutere shown to the court last week indicate DeCoutere moved to Toronto in 2005.

But Dunsworth echoed DeCoutere’s originally testimony, which was dismantled by Heinen in court. Dunsworth claimed her friend was not interested in Ghomeshi: “[All] I remember is that sense she really wasn’t that into him,” Dunsworth said, adding, “You know, [the choking incident] kind of sealed the deal … I think she described him as arrogant.”

Texts and Facebook messages between the two women dated between Oct. 27 and Nov. 13, 2014, also were submitted to court records. When asked in 2014 about whether she and DeCoutere had “recent communication” about the choking incident, Dunsworth said: “Umm, well, obviously I’ve talked to her because she’s one of my best friends.” Dunsworth told police DeCoutere called her in fall of 2014 before she “went public, umm, just to sort of warn me.” Facebook communication on Oct. 27, 2014, indicate DeCoutere told Dunsworth she would be “stirring the pot” by taking to Twitter about the allegations. Dunsworth responded: “I’ll keep the heat down? I’ll turn it up? I don’t know what I’ll do.”

Then she figured it out:

I’LL BE YOUR OVEN MITTS

In her response, DeCoutere said was “giving people the rope” and that she loved Dunsworth, who responded: “don’t give the people s–t speak your truth and know we all support you.”

On Oct. 29, 2014, DeCoutere texted Dunsworth expressing self-doubt: she said she’d be on CBC’s The Current the next day and that she hoped she didn’t “sound like a f–king moron.” Two weeks later, on Nov. 13, 2014, DeCoutere wrote to Dunsworth and said, “Um, guess what? the Toronto cops want your number.”

“Just to corrorborate? [sic],” Dunsworth responded. DeCoutere wrote back: “I told them I told you what happened AGES ago.” Dunsworth’s testimony was vital, DeCoutere told her: “It makes me look like i am not a copycat reported [sic].” Dunsworth shot back: “Corroborate haha.” “All those words,” DeCoutere said. “Ya no prob,” Dunsworth answered.  Justice Horkins agreed to read the statement for “probative value.” What he will make of of it we will see.