The Scarlet String Bikini and the New Shame 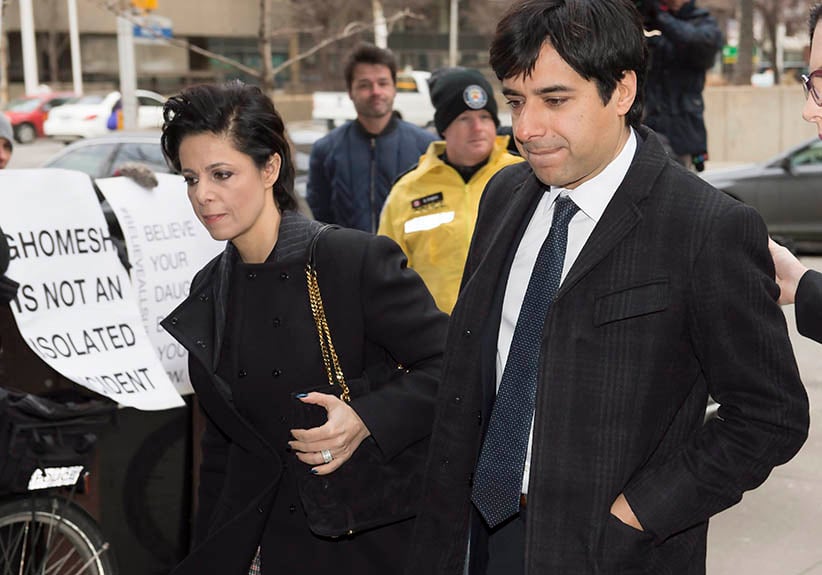 Jian Ghomeshi arrives at a Toronto courthouse with his lawyer Marie Henein (left) for the third day of his trial. (Frank Gunn/CP)

We have Ontario Court of Justice Judge William Horkins to thank for the fact that a photograph in which the first witness in the Jian Ghomeshi sexual assault trial poses in a red string bikini on a beach will not be splashed over front pages of newspapers (her face modestly pixelated, of course).

The decision came this morning after several media outlets (Maclean’s not among them) called for the photo, an attachment on an email the witness sent to Ghomeshi entered into evidence (but not shown to the gallery) on Tuesday, be made public. The lawyer representing the outlets argued that it be unsealed on the ground that “the public should see what [the judge] should see.” Justice Horkins thought otherwise, ruling that doing so would compromise the privacy of the witness, whose identity is protected by publication ban. He ruled it would also run contrary to “serious societal interest in protecting this witness’s privacy interests” in that it would inhibit other victims of sexual assault from coming forward. “You don’t need to see it, to get the picture,” he said.

The back and forth provided a telling microcosm of bigger tensions in the Ghomeshi trial—between the antiquated, yet very much alive, view that being a victim of sexual assault is shameful, and the reality of sexual assault complainants whose responses and reactions may not conform to a Scarlet Letter script. If anything, the Ghomeshi trial has unearthed a 21st-century Scarlet String Bikini script—a new trope of the sexual-assault complainant as a flirtatious, sexually profligate female needy for attention, and perhaps also an improvement in her social standing. In yesterday’s cross-examination, Marie Henein, Ghomeshi’s lead lawyer, hammered away at the first witness’s faltering career, grilling her on whether she was drawn by Ghomeshi’s celebrity (such as it was at the time). Nor was the witness a passive actor: she sent a provocative image of herself to Ghomeshi 18 months after she said he sexually assaulted her twice; she testified the image was “bait” to corner him to ask him “why he punched me in the head.”

Today’s testimony by Lucy DeCoutere, the former Trailer Park Boys actress and producer who is now a reserves captain in the Royal Canadian Air Force, likewise tested these new boundaries, which see the old practice of attacking a woman’s virtue in sex crime cases replaced by a new strategy suggesting she’s in it to profit or gain celebrity.

DeCoutere, whose name and face are twinned with the Ghomeshi case, was relaxed, chatty, even self-deprecating on the stand; she admitted some of her behaviours were “illogical” even “ludicrous” in the retelling. She was a “pleaser,” she said. That testimony echoed stories she’s told, Marie Henein reminded the court, in at least 19 media interviews since Ghomeshi was fired from the CBC in October 2014: She met Ghomeshi in June 2003 at the Banff TV festival, then exchanged “cheeky” emails that could turn “bawdy,” sharing a reference to a “rusty trombone” she joked about in one email that had nothing to do with orchestral music. The alleged assault occurred a month later when she visited him in Toronto; after they went out to dinner, he invited her back to his house where he kissed, then choked, then  slapped her three times, she testified.  Instead of leaving, DeCoutere, who said she had “no framework” for understanding what had happened, tried to “normalize” the situation: “I didn’t want to be rude,” she says. She listened to Ghomeshi play the guitar, sat with him on his couch, and then kissed him good night. They socialized several times over the next few days, going to brunch, a barbecue and an art show. After she returned to Halifax, she sent flowers as a “thank-you.” She blamed herself,  DeCoutere said: “I had compassion for him but I didn’t have compassion for me. I put myself in this place.” When asked why she didn’t report, she admitted she didn’t understand the spectrum of sexual assault: “I always thought assault meant you were beaten to pieces. I didn’t think this qualified.”

The relationship dwindled, punctuated by a few menacing events: she testified they shared a karaoke duet of Britney Spears’s “(Hit Me) Baby, One More Time” in Banff in 2004 (she didn’t get the irony at the time, she said); at the Gemini Awards, she said was shocked when Ghomeshi put his hand to her neck; she also appeared on Q, the program he hosted, when it visited Halifax, though her segment was cut short.

The fact that DeCoutere asked for the publication ban routinely imposed in sexual assault cases be lifted—as is her right—was marshalled by Heinen as evidence she was exploiting the situation for celebrity and profit. Henein, skilled at building narratives, constructed the argument that DeCoutere was seeking fame from her Ghomeshi association, noting DeCoutere conducted multiple interviews after Ghomeshi was fired from the CBC in October 2014 and before she reported to police in November 2014.  In the process, DeCoutere gained worldwide attention, Henein said—a fame “different than attention you were getting on Trailer Park Boys.” Henein told the court DeCoutere’s Twitter following jumped from 1,000 to 25,000 (it’s actually 23,500, not high by Twitter standards). After the #IBelieveLucy hashtag created in solidarity began trending, DeCoutere was “excited Mia Farrow tweeted support,” Henein said. The lawyer read a message that DeCoutere sent a friend boasting she was “to sexual assault what David Beckham is to Armani underwear.” A “terrible analogy,” DeCoutere admitted, who confessed she has a “salacious” sense of humour.

As with the first witness, the focus was on the aftermath of the alleged assault, though Henein did question DeCoutere about confusing the order of the assault: “Did he kiss, choke and slap? Or kiss, slap and choke?” she asked. The trial itself was invoked as further evidence of the fame-seeking: “Do you recall saying how excited you were for court, that it’s theatre at its best?” Heinen asked DeCoutere. “Yes,” DeCoutere answered, again underscoring her vexing persona—a complainant in a sexual assault case who wasn’t terrorized by the prospect of a trial, but blasé about it, even making jokes.

If there is a theatrical theme being cemented by the Ghomeshi defence, it’s that of the revenge tragedy, with the complainants as the avenging agents, exploiting Ghomeshi’s fame. And that, of course, would make Ghomeshi the victim. At the end of the day, Henein read a message DeCoutere sent to a friend about Ghomeshi, part of the cache of personal emails and texts between DeCoutere and her friends and family that DeCoutere had to turn over to the defence at their request: “I want him f–king decimated,” she had written. Henein then intimated there was far more to come, asking the witness somewhat cryptically: “Do you want to tell His Honour the real conversation? The one that you have not told anybody even today, even when you met with the police?…Not the one you’ve been reporting to the media, not the one in press releases.” What that means, tomorrow will tell.