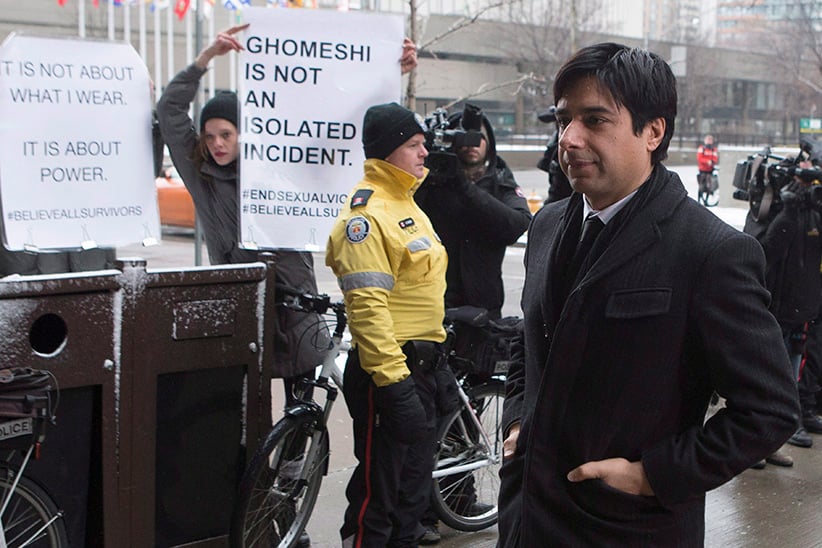 Former CBC radio host Jian Ghomeshi walks past protesters as he arrives at a Toronto court for day six of his trial on Tuesday, Feb. 9, 2016. (Chris Young/CP)

The Jian Ghomeshi sexual assault trial is slowly winding down—audibly, visibly, almost psychically. With complainant cross-examination over, today was the first day the courtroom failed to reverberate with gasps summoned by defence lawyer Marie Henein’s propensity to conjure astounding “gotcha” moments—a damning “love letter” a witness said she forgot she wrote here, a sexual act with the defendant unreported there. Nor were pre-dawn cameras fixed outside of Old City Hall as a much smaller media contingent than previous days lined up for doors to open at 8. Only yesterday, courtroom 125 was Toronto’s Roman Colosseum, jammed with the public eager to hear Ghomeshi’s accusers tell their story, and undergo figurative dismemberment by Henein. Today, the sparsely populated gallery heard lawyerly arguments, leaden with case law, concerning the suitability of the first and final Crown witness beyond the three complainants to be called to the stand; this one would support testimony of complainant Lucy DeCoutere.

Addressing the court, Crown prosecutor Michael Callaghan argued the witness was necessary to right DeCoutere’s reputation. “In this case, there has been allegation of ‘recent fabrication,’ ” he said, referring to Henein telling DeCoutere the assault “never happened” and that she was “making it up.” The defence “expressly or implicitly” accused DeCoutere of “collusion” [with another complainant] and also that she reported to police for “fame and attention,” Callaghan said. This new witness would testify that DeCoutere told her more than a decade ago, in 2004, that Ghomeshi “choked her”—and thus confirm that the allegation wasn’t some recent invention.

In a bid to have the witness excluded, Henein’s co-counsel, Danielle Robitaille, argued that the defence wasn’t claiming DeCoutere “came forward to increase Twitter followers.” It is saying she was dishonest, period, she said: “We will say she lied,” adding, to make it clear, “We have made a bald statement of fabrication against Ms. DeCoutere.” The fact DeCoutere repeated the lie to the witness at some point in time is irrelevant, Robitaille told the court: “A concocted statement repeated on more than one occasion remains concocted.” She flicked at how the defence might dismantle this witness should she be called, citing timeline inconsistencies in her statement. She also noted that a dive into DeCoutere’s Facebook history, a recurring defence tactic, revealed DeCoutere communicated with her last year and even guided her to corroborate her story to police.

After listening to arguments and using an hour-and-a-half recess to read relevant case law, Ontario court Justice William Horkins indicated he was up for a little more legal thrust and parry before hearing Crown and defence closing statements: “I’ve given it careful thought,” he said, noting that there are legitimate concerns. Lucy DeCoutere’s “credibility was attacked,” he said, when she was told, “It never happened.” He then ruled: “The Crown can call the witness.” And that means there could be another small bang before this criminal case finally whimpers to a finish.