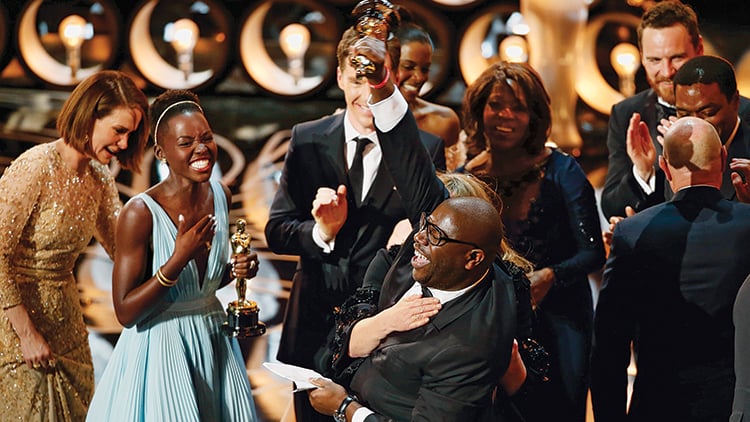 Golden night: Steve McQueen, director and producer of 12 Years a Slave, celebrates with cast and crew after accepting the Oscar for best picture.

A dose of reason

Modest though it is, the Canadian Mortgage and Housing Corporation’s latest move to guard against a U.S.-style real estate crisis is nevertheless welcome. More than a nod to overheated home markets in Canada’s largest cities, the hike in insurance premiums for mortgages with less than 20 per cent down offers a modicum of protection for taxpayers, should the market ever crater. Yes, prices have been driven up mainly by dirt-cheap credit. But easy insurance has played its part in the frenzy, too, and it’s high time the CMHC tightened its purse strings.

A bipartisan initiative between the Obama administration and Republicans in the U.S. Senate is reportedly under way to end mandatory minimum sentences for non-violent drug offenders. Billed as the most significant liberalization of narcotics law since Richard Nixon declared the war on drugs, this overdue move acknowledges the obvious: Mandatory minimums can be self-defeating, ruining people who might otherwise lead productive lives. The Harper government—currently embroiled in a conflict with Canadian judges on mandatory sentences—would do well to take heed.

Fair or not, Fort McMurray is synonymous with two things: money and mischief (it’s no secret why Alberta’s oil sands boomtown is a fixture near the top of Maclean’s annual list of most dangerous cities). But new research out of Simon Fraser University suggests that, despite its undeniable oversupply of cocaine, “Fort McMoney” may not actually deserve its wild, prostitute-ridden reputation. In fact, the study found that violence and property crimes in the region are not only lower than the national average, but falling fast. So we critics can, you know, take a powder.

Yet again, Pope Francis has proven to be a man of the people—dropping an accidental “f-bomb” during his Sunday blessing at the Vatican. Speaking from a window in St. Peter’s Square, the pontiff mistakenly mixed up the Italian word caso, which means “case,” with cazzo, which can translate to “f–k.” To no one’s surprise, the clip quickly went viral, scandalizing those who like their liturgy in Latin and their popes letter-perfect. But hey, the Church is trying to modernize, and what’s more modern than a little vernacular? Let he who is without sin cast the first stone.

An atrocity and its aftermath

Chinese authorities arrested four people following last week’s knife massacre at a train station in Kunming that killed 33 and injured 130. But repercussions of the attack are only starting. With Beijing accusing Uighur separatists of the rampage, a crackdown has begun anew in Xinjiang province, where most members of the Muslim minority live. And though the government’s finger-pointing must be viewed with healthy doubt, Chinese Uighurs sense that international sympathy for their plight is already waning. Details of the attack are still emerging, but it is, all in all, a barbaric act, the impact of which will be felt for years to come.

Remember those claims that Western intelligence agencies were only looking at so-called “metadata”? That they were merely hunting for patterns that point to terrorists? Well, the latest revelations from U.S. whistle-blower Edward Snowden suggest that Britain’s spy agency, the GCHQ, with help from Washington’s NSA, intercepted and stored millions of people’s webcam chats—including sexually explicit ones. How much longer, then, can the spooks claim that law-abiding citizens are safe from their snooping?

Facial hair is back in vogue, thanks to hipsters and ’70s period movies like American Hustle. But the consequences are getting creepy. The International Society for Hair Restoration reports that 4,500 men in the U.K. obtained beard implants last year—13 per cent more than the previous year and three times the number who got nose jobs. Men in the U.S. are paying up to $7,000 for the procedure, or about $4.50 per whisker. Sad to think insecurity runs as rampant among the baby-faced as among the balding.