Justin Trudeau's upcoming 'candid' memoir, skin-tight garb for astronauts and European millennials moving back in with their parents 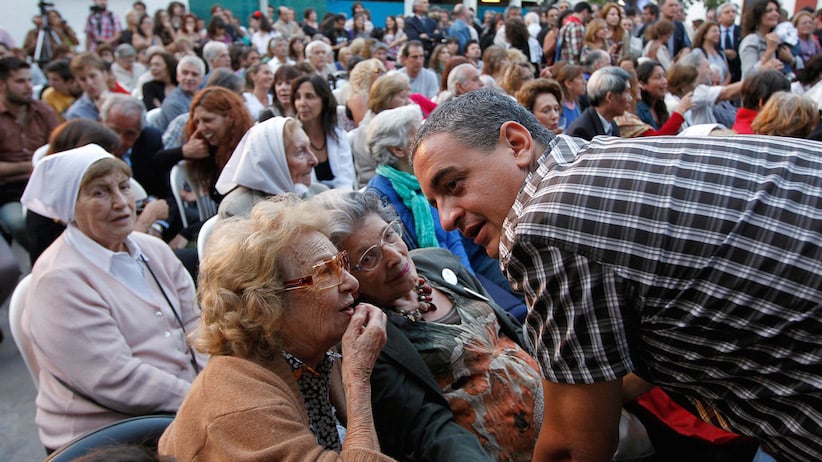 Horacio Pietragalla Corti, one of Argentina’s ‘stolen babies,’ attends the opening of a cultural centre that was once a concentration camp

Justin time
Word that Justin Trudeau plans to publish a “candid” memoir this fall has been greeted with some derision. What insights does a 42-year-old possess, his critics ask? Well, U.S. President Barack Obama was just 33, and at the beginning of his political career, when he penned Dreams from My Father. Who knows if the Liberal leader’s book will be as well-executed or received, but it will be nice to finally learn some specifics about his vision for the coun- try. And the profits are to go to the Red Cross. Trudeau has led an interesting life so far. Now it’s time for him to define himself—before the Tories and their attack ads do the job for him.

What bubble?
The much-predicted crash of Canada’s hot housing market may not happen, says a new report. The Conference Board of Canada study suggests high house prices—and the big mortgages that have fuelled them—have been offset by historically low interest rates. Even in Toronto, which appears most at risk, a typical family’s monthly mortgage payments are proportionally about the same as 20 years ago. Furthermore, continued population and wage growth is expected to prevent rising rates from cratering house prices. That’s welcome news for a country that’s spent the past six years fretting about a U.S.-style implosion.

Hunting for a monster
America is stepping up the pursuit of the leader of the Lord’s Resistance Army, Joseph Kony, dispatching planes and special forces troops to east Africa. The Ugandan rebel is wanted by the International Criminal Court for war crimes, including murder, mutilations, mass burning and lootings, and his group has abducted more than 20,000 children over the years, forcing them to become soldiers or sex slaves. Finding him in the vast and remote areas of the Central African Republic, South Sudan and the Democratic Republic of the Congo where he operates will not be easy. But the world will be a better place when he is finally brought to justice.

Toboldlygo…
Researchers from the U.S. and the U.K. are working on a new, skin-tight suit they hope will counteract the physical effects of extended space travel. Currently, astronauts suffer when their spines lengthen and their muscles atrophy while weightless, contributing to back and other health problems when they come down to Earth. The new compression suits, which mimic the force of gravity, should fix that. And they’ll make space a whole lot sexier.

Confusion in the air
Malaysia’s prime minister, Najib Razak, has confirmed what seemed obvious to most for more than two weeks: Flight MH370 crashed into the sea, killing all 239 aboard. It was the latest development in an investigation that’s been characterized by official missteps, rampant speculation and a startling lack of basic information—and, for some reason, it was relayed to many distraught families via text message, sparking further outrage. How did the plane end up thousands of kilometres off course, in the middle of the Indian Ocean? Nothing the Malaysians have done so far gives confidence that the world will find out soon.

Nothing like justice
Egypt’s judicial system was never a good model. But now it’s a terrifying joke. This week, a court sentenced 529 members of the Muslim Brotherhood to death for the killing of a single policeman in a riot last summer. Their trial lasted just two days. More than 16,000 supporters of ousted president Mohamed Morsi are currently behind bars, and both he and his predecessor, Hosni Mubarak, are on trial for inciting past violence. The absence of due process and basic fairness in Egyptian legal proceedings should be a global concern. And Canadians should be paying more attention to the plight of their fellow citizen, Mohamed Fahmy. On trial for “spreading false news” about the military dictatorship in his work for Al Jazeera, the journalist needs help—for it’s clear his judges can’t be trusted.

A sad spring
Canadians may still be basking in the glow of Sochi’s hockey golds, but as the NHL playoffs approach, our home teams aren’t giving us much to cheer about. Only Montreal is a lock to compete for Lord Stanley’s mug. Toronto is on the bubble, and all the other Canuck clubs are on the outside looking in. It’s now 20 years and counting since the Cup resided on this side of the border. High time for somebody—anybody—to bring it back.

What’s for dinner?
Facing a youth unemployment rate of nearly 25 per cent (and as high as 60 per cent in debt-addled Greece), many young Europeans have decided to save money by moving back home. A new survey of 28 European countries found that 48 per cent of people aged 18-30, or 36.7 million people, were living with their parents in 2011, up from 44 per cent four years earlier. Nothing like an economic crisis to bring families closer together—whether they like it or not.