Wifi at your campsite, escalating sanctions against Russia and the never-ending search for Flight 370 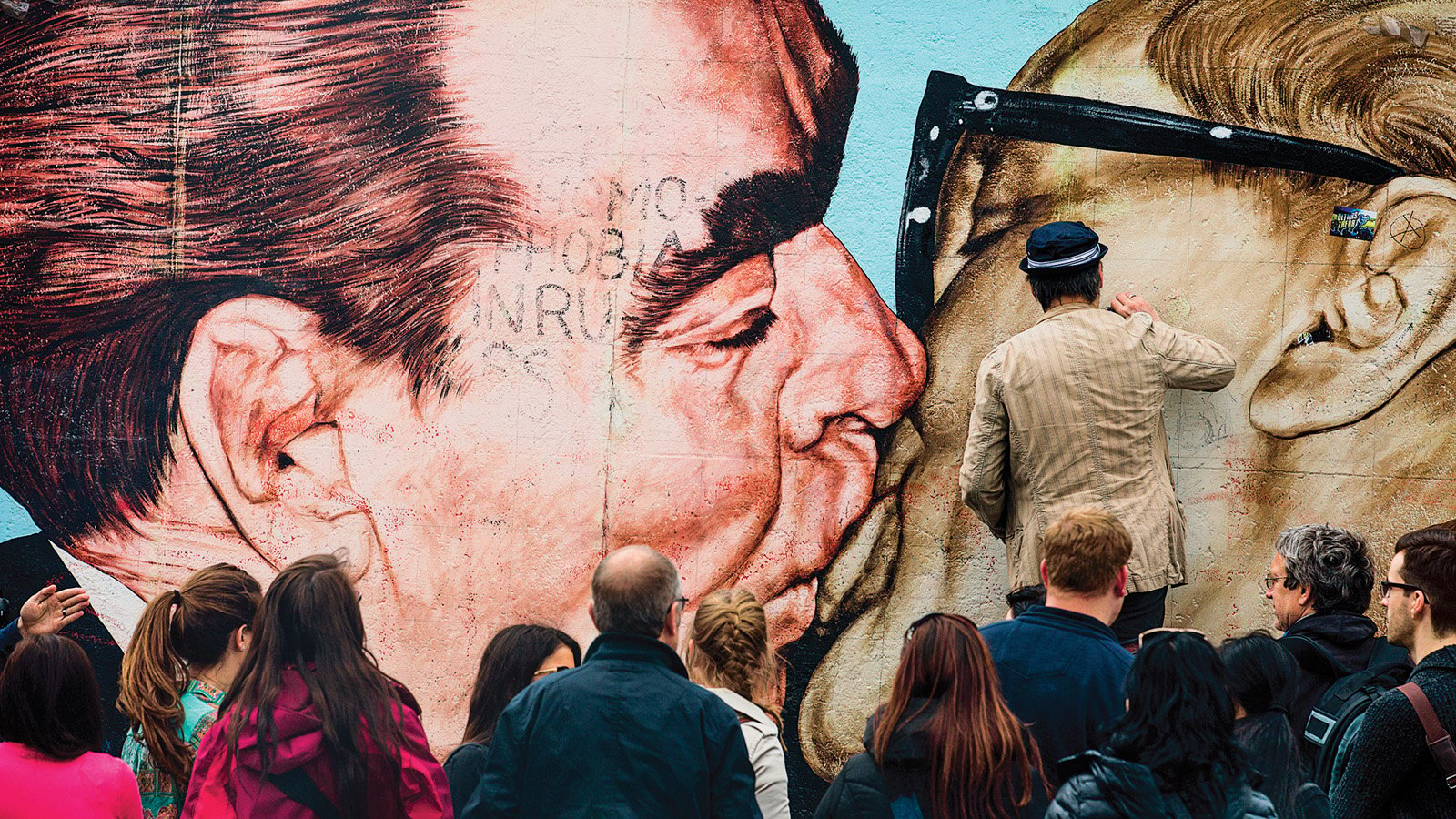 Divide and conquer: Dimitry Vrubel cleans his mural as artists scrubbed tags from an open-air gallery, which stretches along the former Berlin Wall (Thomas Peter, Reuters)

Crossing the finish line
Vancouver has paid off the remaining $630 million in debt from its once-troubled Olympic Village project by selling the last 67 condos for $91 million. The city took on nearly $1 billion in debt to get the development completed in time for the 2010 Winter Olympics, raising fears taxpayers would be left on the hook. The Olympic success story should serve as inspiration for Rio de Janeiro, the host city for the Summer Games in 2016. This week an IOC vice-president called its preparations the “worst” he’s ever seen.

Putting the squeeze on Putin
Canada, America and the European Union are escalating sanctions against Russia in response to its ongoing intervention in Ukraine. Russia annexed Crimea in March and is widely believed to be responsible for much of the violent unrest now gripping eastern Ukraine, where pro-Russian separatists have taken control of administrative buildings in several towns and cities. Canada is also sending six CF-18 fighter jets to Romania to assist in NATO operations meant to reassure European members of the alliance worried about Russian expansionism. This pressure has yet to curb Russian aggression, but it shows Moscow that the West is united and, one hopes, resolute.

Tweet under the stars
Parks Canada plans to launch WiFi in as many as 50 parks this summer and 150 over the next three years. While the idea is not entirely new—some provincial parks already offer wireless hotspots—critics claim it goes against the spirit of camping, which is supposed to be a refuge from city life. But Parks Canada says it’s merely offering a service its customers want: access to email and social media while on vacation. Plus, there’s the obvious safety benefits of being able to google “how to light campfire,” or “what to do if bear attacks.”

Motor City moves forward
Detroit has reached a tentative five-year deal with city workers, boosting the chances that it will be able to exit bankruptcy protection by this fall. The deals, which must be approved by the bankruptcy judge, involve more than 14 unions and 3,500 municipal employees. A financial fix to Detroit’s problems can’t come soon enough. Last month, the chief of the city’s cash-strapped police department defended residents’ right to shoot intruders in their homes—a form of citizen self-defence that’s been used eight times this year.

Peace pipe dream
Talks between Israel and the Palestinians passed a U.S. deadline this week with no peace agreement reached, and few signs that one might still be possible. Negotiations collapsed after rival Palestinian factions, Fatah and Hamas, announced plans to form a unity government. Israel says it will not negotiate with a Palestinian government that includes Hamas, a terrorist organization. American Secretary of State John Kerry, meanwhile, drew fire for warning in a private meeting that Israel risks becoming an “apartheid state” if a two-state solution is not achieved.

Path of destruction
More than 30 people in six U.S. states have been killed and hundreds injured this week by a vicious storm system that spawned multiple tornadoes with winds as strong as 240 km/hr. The storm hit densely populated areas across the U.S. South and Midwest, levelling neighbourhoods and leaving thousands homeless. It’s a grim reminder not only of the deadly power of tornadoes but of how difficult they still are to predict and guard against.

Without a trace
The aerial search for wreckage of Malaysia Airlines Flight 370, missing since March 8, is being wound down after finding no trace of the missing Boeing 777 and its 239 passengers and crew in the Southern Indian Ocean. Now, private companies specializing in deep- sea search will comb the sea floor of the suspected crash site off the coast of Australia—a task that could take up to eight months to complete. As the hunt drags on, so too does the rampant speculation about the plane’s whereabouts, including a tip this week by an Australian company that the wreckage is thousands of kilometres away at the bottom of the Bay of Bengal. The search continues to be literally all over the map.

Too much love
Paris’s historic Pont des Arts bridge, first erected during Napoleon’s reign, is at risk due to thousands of padlocks young couples (mostly tourists) affix to its railings every year as a symbol of their devotion. More than 6,000 people have signed an online petition encouraging a clampdown on the six-year-old tradition, and the city is debating whether to issue a ban or merely encourage restraint. In addition to marring its appearance, there are real concerns that the sheer weight of the rusting locks could compromise the span’s structure.