In the headlines: Quebec passes right-to-die legislation, and hope for peace in Afghanistan looks faint 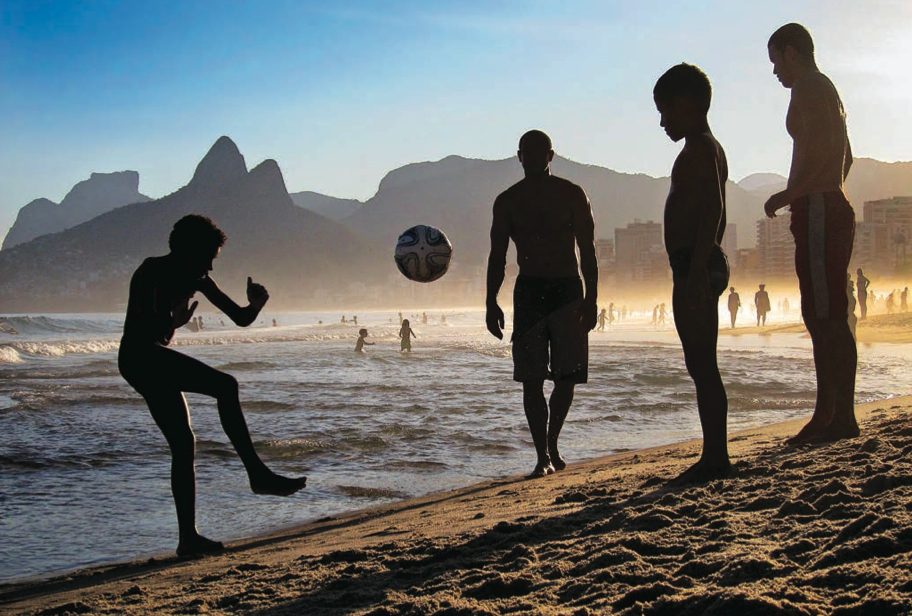 The ball’s in their court: Children play a game of soccer on Rio de Janeiro’s Ipanema beach as the 2014 FIFA World Cup nears its kickoff in Brazil. Jamie Squire/Getty Images

All credit to federal Finance Minister Joe Oliver for uncorking over the indebtedness of Ontario and Quebec. It was high time someone acknowledged that borrowing costs in Canada’s two largest provinces are jeopardizing the country’s economic recovery and— judging by Ontario’s recently tabled, red-ink budget—some provincial leaders remain oblivious to the danger. Oliver will take heat for speaking out in the middle of Ontario’s election campaign, but let’s dispense with the ninnyish idea that complex, pressing issues are best left until after voting day. Now, more than ever, is the time to air them.

Quebec became the first province in Canada to pass right-to-die legislation. Under the law, terminally ill patients “in an advanced state of irreversible decline” can seek medical aid to end their lives. It will apply only in exceptional circumstances to the tiny percentage of people who, despite the best palliative care, experience “unbearable” suffering. It also includes safeguards to ensure a patient is making a free and informed decision. Quebec’s law marks an important step: treating dying with dignity as a medical issue, not a criminal one, as in the rest of the country.

In a good sign for Canada, things are looking distinctly bullish for our largest trading partner. U.S. employers added 217,000 jobs in May, pushing the labour market past a key psychological milestone: It has recovered all 8.7 million jobs lost in the recession, and now stands at 138.5 million. Investors responded enthusiastically, driving markets higher on Monday for a fourth straight session, and propelling the Dow Jones industrial average and S&P 500 to record closes. Five years after the slump, Uncle Sam is regaining his healthy glow.

How better to appreciate life than to celebrate a brush with death? Internet readers spent the week applauding an Edmonton couple who escaped unharmed after their truck was struck by lightning and engulfed in a fireball; the spectacle was caught on tape by a nearby surveillance camera. Then, on Monday, a giant asteroid nicknamed Beast whizzed past Earth at just three times the distance to the moon. In astronomical terms, that’s about as close as it gets. And since NASA only spotted the marauder on April 15, we wouldn’t have had time to dispatch Bruce Willis. So, hey everyone, here’s to being here.

If last week were the only measure, you’d hardly know there’d been a Western military mission to Afghanistan. First, the front-runner in the current presidential election, Abdullah Abdullah, narrowly escaped an assassination attempt by suicide bombers that killed three of his bodyguards. Then, five U.S. troops died in a friendly-fire incident that echoed the one that killed four of their Canadian allies early in the war. As the U.S. staggers toward the end of its 13-year action, hope for lasting peace and order in the central Asian country remains, to say the least, faint.

To find the soft underbelly of our prisons, one apparently need only look up. Last week’s helicopter jailbreak in Quebec—the second such caper in 14 months—revealed a checklist of weaknesses, from unarmed guards in watchtowers to rules preventing corrections officers from firing on aircraft. We’re all for caution, but when three prisoners pile into an uninvited aircraft in the middle of a jail yard, surely guards should have the licence and means necessary to stop them. Time to review those rules.

It’s been seven weeks since Islamic militants abducted more than 300 schoolgirls and young women from a school in northeast Nigeria, and the group that took them still runs amok. Last week, Boko Haram gunmen reportedly kidnapped 20 women from a settlement near Chibok in northeast Nigeria, while others killed dozens of villagers in fresh attacks in Borno state; in one attack, gunmen disguised as soldiers fired on a crowd
in a church compound. Is Lagos truly this helpless in the face of such audacity.

Having failed to make a public policy case against the Keystone XL pipeline, America’s most deep-pocketed climate-change activist has resorted to scare-mongering. Tom Steyer, hedge fund billionaire-cum-environmentalist, hired retired Navy SEAL chief David Cooper to assess how vulnerable the 1,650-km conduit might be to sabotage, and—surprise!— Cooper concluded that evildoers could easily cause a catastrophic spill by hitting the line. Of course, that’s true of virtually every pipeline in North America, so maybe Steyer is trying to tell us that a completed Keystone would be extra-important to the U.S. and Canadian economies. If so, we agree. Such an asset would be well worth guarding.