"The short answer is this," Clinton wrote in a statement. "If I had it to do again, I wouldn't." 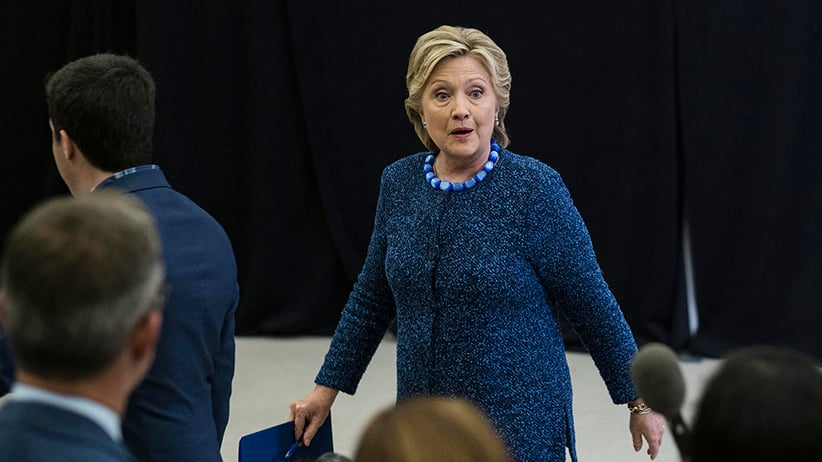 Hillary Clinton speaks to journalists during a hastily formed press conference to comment on the new FBI investigation concerning Clinton’s private emails, after a rally at Roosevelt High School in Des Moines, on Oct. 28, 2016. (Photo by Melina Mara/The Washington Post via Getty Images)

NEW YORK — Hillary Clinton says she should not have let a senior campaign adviser keep his job after a female staffer accused him of sexual harassment in 2007.

“The most important work of my life has been to support and empower women,” Clinton wrote on Facebook Tuesday night. “So I very much understand the question I’m being asked as to why I let an employee on my 2008 campaign keep his job despite his inappropriate workplace behaviour. The short answer is this: If I had it to do again, I wouldn’t.”

Clinton said that senior campaign staff and legal counsel confirmed that the behaviour by faith-based adviser Burns Strider had occurred after the woman came forward. Her campaign manager recommended that Strider be terminated, but Clinton said she instead demoted him, docked his pay, required counselling, separated him from the victim, and warned him that he’d be fired if he did it again.

READ: No, Hillary Clinton should not ‘Shut the F–k Up and Go Away’

The Times reported that Strider declined to attend the counselling sessions. He did not immediately respond Wednesday to a call and email requesting comment. Strider told BuzzFeed News that he didn’t consider his behaviour “excessive, but that doesn’t mean it wasn’t to” the woman.

Clinton said that there were no further complaints against Strider during the rest of the campaign, but that she is troubled that he was terminated from a job leading an independent political action committee supporting Clinton for inappropriate behaviour several years later.

“I believed the punishment was severe and the message to him unambiguous. I also believe in second chances,” Clinton said in the post published shortly before the start of President Donald Trump’s State of the Union address. “But sometimes they’re squandered.”

She said that the reoccurrence of the behaviour “troubles me greatly” and leads her to question whether it would have been better if she had fired him.

READ: When Hillary Clinton and Barack Obama came to Toronto

“There is no way I can go back 10 years and know the answers. But you can bet I’m asking myself these questions right now.”

Clinton said that her first thought after the Times report “was for the young woman involved” and that she reached out to her “to see how she was doing, but also to help me reflect on my decision and its consequences.”

“She expressed appreciation that she worked on a campaign where she knew she could come forward without fear,” Clinton said. “She was glad that her accusations were taken seriously, that there was a clear process in place for dealing with harassment, and that it was followed. Most importantly, she told me that for the remainder of the campaign, she flourished in her new role.”

She said the woman “read every word of this and has given me permission to share it.”