History lessons for Donald Trump after his Fourth of July speech

Maybe the U.S. president fell victim to a Teleprompter malfunction. Or maybe he didn't know what he was talking about. Either way, we've got his back. 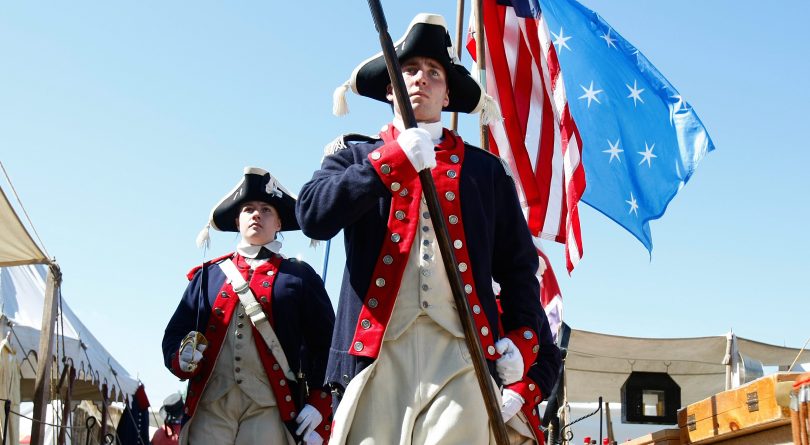 These happy anachronists from Michigan, seen during War of 1812 bicentennial celebrations in Sault Ste. Marie, Ont., might give the president history lessons. (Kenneth Armstrong/CP)

Donald Trump is not known as a history scholar. Or a soldier. But in his recent Fourth of July address, Trump made several boasts about America’s military exploits that left even some of his staunch supporters scratching their heads.

While some mistakes could be attributed to a Teleprompter misread—it was raining after all—the errors were glaring enough to set down, and set straight. For the sake of history.

Here’s an excerpt from Trump’s speech, and a few clarifications for the president should he discuss America’s military past again.

“In June of 1775 the Continental Congress created a unified Army out of the Revolutionary Forces encamped around Boston and New York, and named after the great George Washington, commander-in-chief. The Continental Army suffered a bitter winter of Valley Forge, found glory across the waters of the Delaware and seized victory from Cornwallis of Yorktown.

“Our Army manned the air, it rammed the ramparts, it took over airports, it did everything it had to do. And at Fort McHenry, under the rockets’ red glare, had nothing but victory. When dawn came, the star-spangled banner waved defiant.”

Trump knows the Wright Brothers are widely credited as the American pioneers who successfully flew the first airplane; he mentioned them earlier in his speech.

Which is to say, the U.S. Army could not “man the air” or “take over airports” in the Revolutionary War, as there weren’t any planes. And if Trump meant that boast to be in reference to the Battle of Baltimore, given his reference to Fort McHenry in the next sentence, that battle took place during the War of 1812—more than 50 years before the Wright Brothers were born.

2. Armies by definition fight on the ground, not in the air

Or so says Merriam-Webster: “a large organized body of armed personnel trained for war especially on land;” or alternatively: “the complete military organization of a nation for land warfare.”

It is true that many modern armies, especially that of the U.S., now make use of helicopters and other aircraft in attack roles. But .. see “airplanes” above.

3. There was no “rocket’s red glare” over Fort McHenry during the Revolutionary War.

Blame it on the rain, or maybe a hard-to-read Teleprompter, but Trump was in the middle of talking about the Revolutionary War when he mentioned Fort McHenry—the site of America’s successful defence of the Baltimore Harbour against the British—which he never mentions took place during the War of 1812.

4. About that “nothing but victory” claim…

America started the War of 1812. The British burned down the White House. And America’s successful defence in the Battle of Baltimore was key to negotiations leading to the Treaty of Ghent—a deal which re-established the borders to the status quo from before the war. In short: it was a resounding victory for neither side.

As for the “rocket’s red glare” and the U.S. national anthem, the lyrics come from a poem named “Defence of Fort M’Henry” whose author, Francis Scott Key, only witnessed the rocket’s red glare because he was trying to negotiate the release of his colleague, Dr. William Beans, who had been taken prisoner.

On Friday, Trump did indeed blame his garbling of facts and events on a Teleprompter malfunction.

Trump said his Teleprompter went out "right in the middle of that sentence" when he said that the Continental Army took over nonexistent airports. He added, "I guess the rain knocked out the Teleprompter…it was actually hard to look at anyway, 'cause it was rain all over."

That seems plausible given the weather, and reassuring to anyone who expects the leader of the free world to have learned rudimentary history. Learning from history? That’s another matter.