Cancer surgeon's podcasts use everything from muppets to Lego 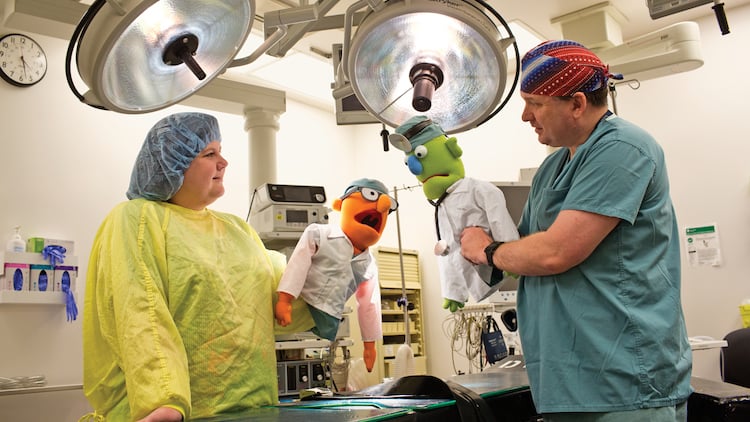 Dr. Jonathan White is a cancer surgeon, a professor, a ukulele player and a multimedia editor who spends Sundays teaching himself how to make podcasts and videos for the world’s medical students.

Dr. White is a 3M National Teaching Fellowship recipient. Click to read about all 10 new fellows.

His Surgery 101 series, which started as audio lectures for surgery students at the University of Alberta’s medical school, has grown from popular podcast to full-blown videos, which open with a musical intro (that’s White on the ukulele) and feature anything from muppets named Thumbs and Dr. Scalpel to Lego mini-figures. The videos are new, but the podcasts have been downloaded 1.2 million times by hundreds of thousands of subscribers in nearly every corner of the world, from Kazakhstan to Papua New Guinea. “Surgery 101 has gone to more countries than I’m ever going to visit,” jokes White.

He first decided to make 15-minute podcasts on important medical concepts in 2008. He uploaded about a dozen to iTunes because it was easier and faster than burning CDs or saving them on memory sticks. Meanwhile, students in Brazil, Romania and Germany were downloading them and spreading the word. When the podcasts stopped, they emailed White, begging for more.

Realizing the world’s medical students were hungry for simplified information, he reached out to residents and surgeons in other specialties, inviting them to deliver up to three main points on topics often suggested by medical students. “We get our Surgery 101 experts to make an episode with us, say, on comas, and we say, ‘If you only had 10 minutes to tell medical students everything they should know about a coma, what would you tell them?’ So, it’s key stuff,” says White, who has a master’s degree in education and leads a teacher-training team. This year, he was one of 10 university professors recognized with a 3M teaching fellowship.

The popularity of the podcasts—they get an average of 1,500 downloads a day—spurred White to start producing video for tablets. One script involves a Star Trek surgeon teaching students how to make a diagnosis when the Tricorder is broken, while another features the muppets giving an orientation tour of an operating room.

There are plenty of lecture-based medical podcasts out there, and more than a few videos of actual surgeries from teaching hospitals the world over. But Stella Yiu, an emergency medicine doctor at the Ottawa Hospital and assistant professor who creates podcasts at the University of Ottawa, says technology has changed teaching drastically, and will change it even more in the next five years. Free, open-access educational tools are moving teachers toward asynchronous learning, a student-centred approach where lectures are augmented, or even replaced, by independent learning.

Yiu, for example, introduces concepts in class before sending students off to do their own research. Some gather in groups, watch videos together and have lively discussions. When they return to class, they practise on mannequins.

“I can then identify what’s really troubling them, what’s challenging for them to understand, and I pinpoint that,” says Yiu. “So, it’s a much more efficient use of their time and my time.”

Although White taught himself to edit in his basement, he recently partnered with business students at the University of Alberta to help market the videos, and enlisted digital media students from the Northern Alberta Institute of Technology to shoot and edit them. He got Covidien, a medical-supplies company not featured in the films, to help pay for production ($50,000 a year, some of which goes to a scholarship). Although videos and podcasts can be downloaded free, students can buy a 99-cent iPhone app with bonus content. Thirty-five per cent of sales goes to the University of Alberta’s Tom Williams Endowed Chair in Surgical Education, currently held by White, while the rest goes to software developers and the App store.

It remains to be seen whether the videos will be as popular as the podcasts, which can be played while doing laundry or running on a treadmill.

When Alexi Millman, a fourth-year medical student at the University of Toronto, did her urology rotation last fall, she would pop on her headphones and listen to Surgery 101 podcasts during the 40-minute walk to and from the hospital.

“That was my study time,” said Millman. “I liked the format, because it meant I could be doing something else and still learning at the same time.”