How do you build an iglu that stands 20 feet tall? Very carefully. 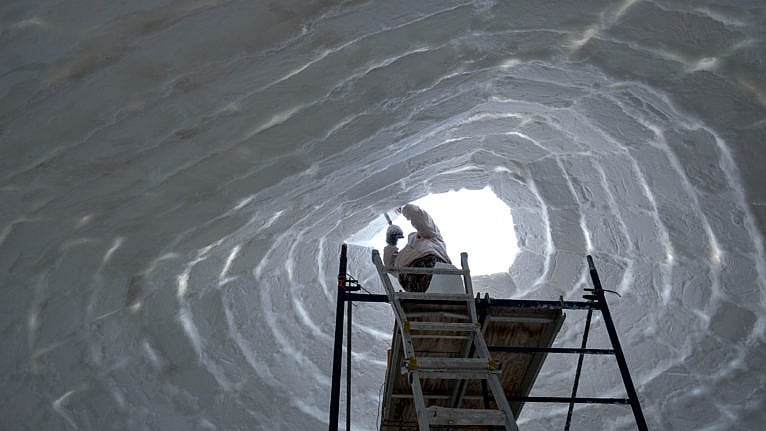 Solomon Awa was 16 years old, alone, and stuck out in the cold. He had spent his youth camping, hunting caribou and harvesting fish with his father. He had watched his dad build shelters, helping to cut snow blocks and patch holes, learning how to eyeball optimal snow conditions and ideal curvatures. So, that day decades ago when he ventured too far out on the land to return before nightfall, Awa knew just what to do to protect himself from the elements. He built his first igloo, or iglu, as the Inuit render it in the Latin alphabet.

Now in his 60s, Awa is a master iglu builder. Over four days in late March, he spearheaded the construction of his biggest structure yet in Iqaluit, with fellow master builder Jacoposie Tiglik, a gaggle of helpers and two tiers of scaffolding. The finished qaggiq—a larger iglu traditionally used as a community gathering place—towered 20 feet high, and 30 feet in diameter.

During the construction process, some 1,100 snow blocks were cut from terrain in Sylvia Grinnell Territorial Park, on the shores of Frobisher Bay. Awa isn’t quite sure how many were used. The number isn’t important. “I don’t count blocks. I just count my blessings,” he says. As the dome is pieced together, builders monitor the vertical and horizontal curvature without the help of instruments. It takes a wealth of experience to make it work, Awa explains. “You have to do it 200,000 times before you get the right shape.” 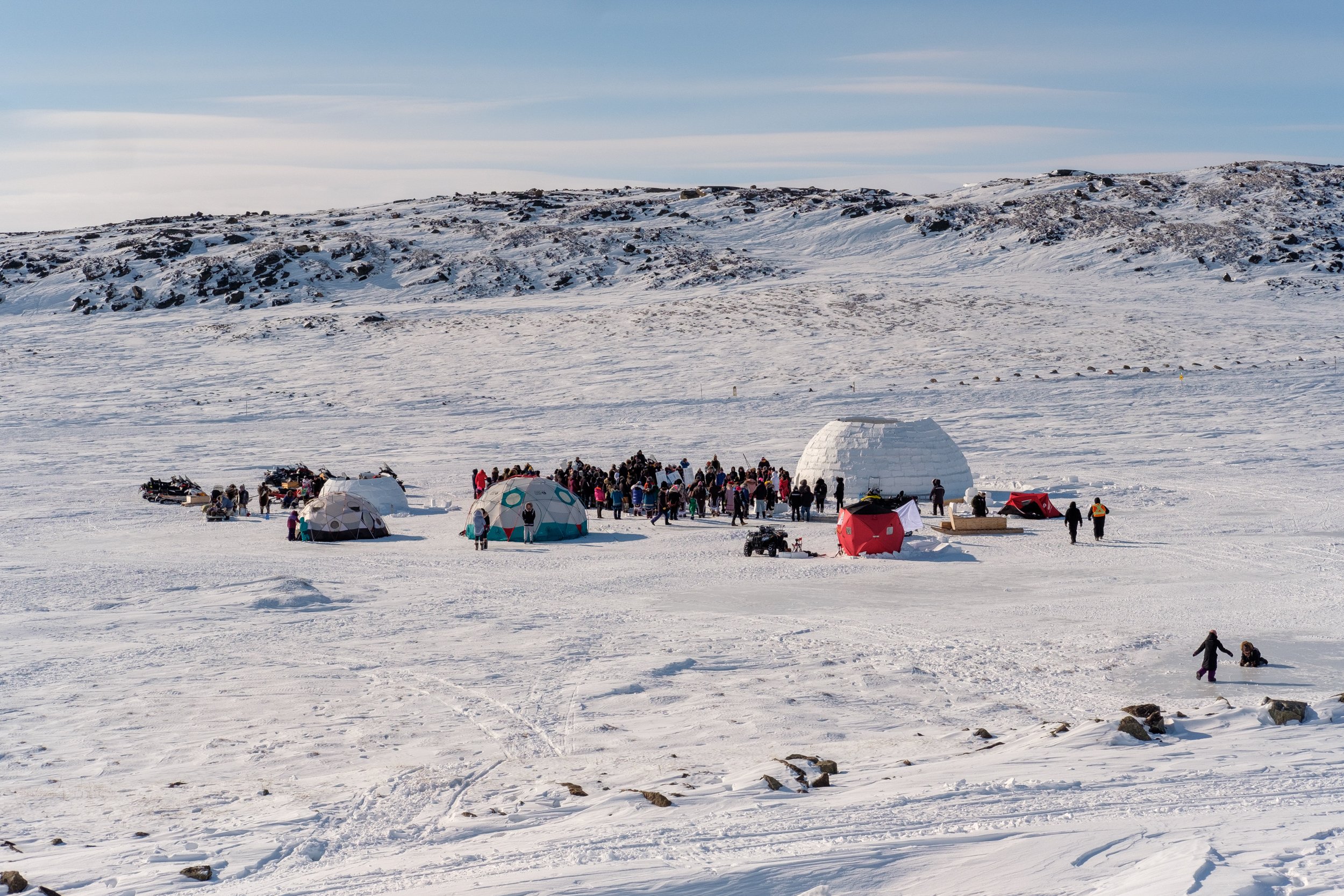 Without passing judgment on the modern schooling system, which still teaches traditional topics and manages to get kids out on occasional camping trips, Awa remarks that “modern society is almost taking over.” Fewer young people in the North spend their childhoods the way he did. Many Inuit have never been inside a qaggiq before.

The building of the qaggiq thus offered helpers a “once-in-a-lifetime experience,” Awa says, to learn traditional ways. Even he, a master builder, had only made two prior attempts at a bigger dome. So on the last day of construction, Awa seized an opportunity to impart know-how, inviting a teenager to help him with the last few blocks. 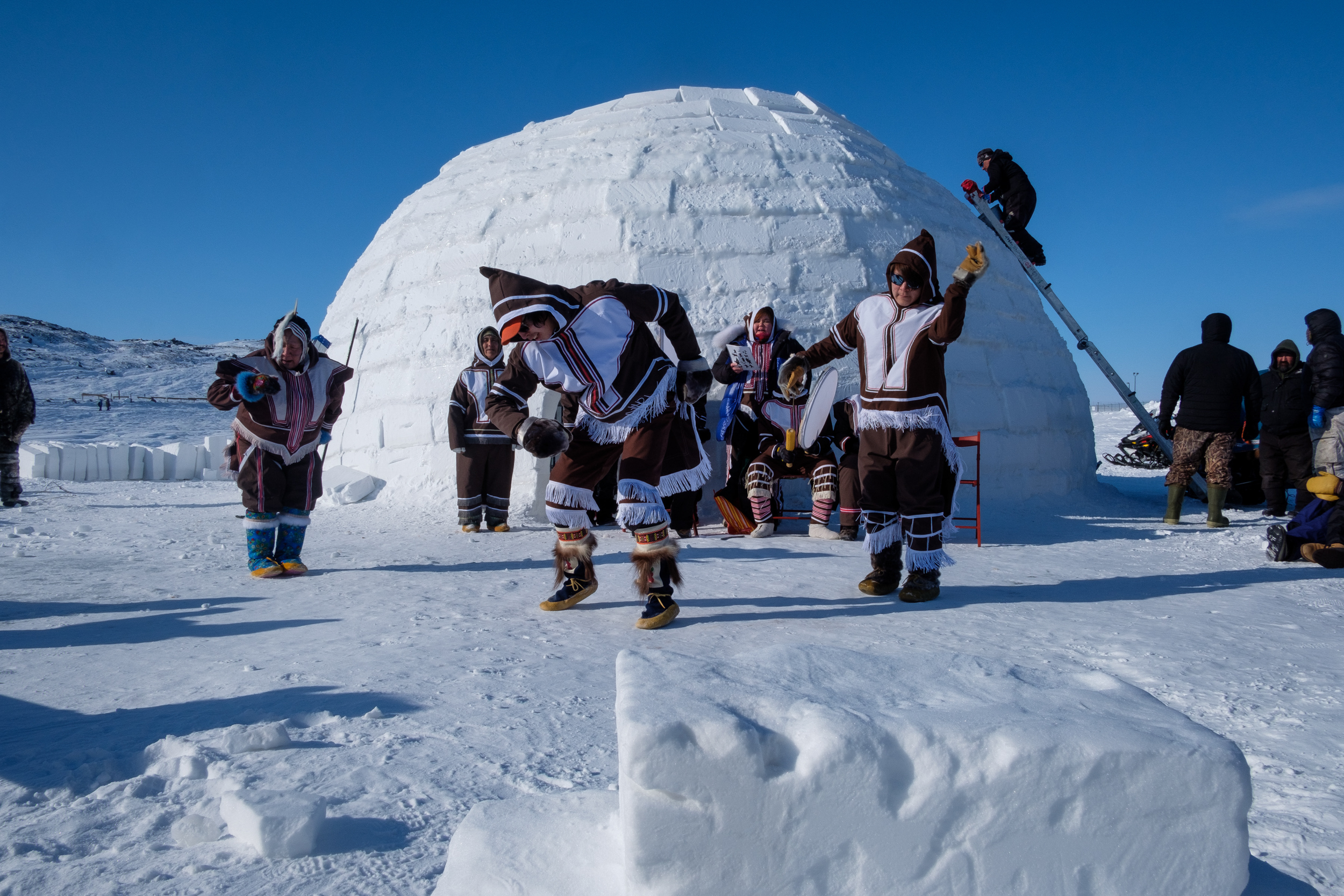 Pitseolak Pfeifer, executive director of Qaggiavuut!, a performing arts society in Nunavut, was standing next to the boy’s father, watching. “I could see the pride in his dad’s eyes,” he says. “There was the structure itself, the number of blocks, but also this whole other experience of intergenerational learning, and community coming together.”

Pfeifer is the one who approached Awa with the idea of building the qaggiq as a centrepiece for a performing arts festival that would serve as a spring celebration. The weekend it went up, some 1,100 people attended outdoor performances by Inuit drummers, singer-songwriters, dancers and storytellers. Children’s workshops taught traditional Inuit songs.

All this had the blessing of public health officials. That Saturday, Nunavut reported zero active cases of COVID-19 in the territory (after a late-April outbreak, the number rose to 61). “We had a pretty long, hard, cold winter with the pandemic. People weren’t able to connect,” Pfeifer says. “We’ve been so fortunate. This was something that led to the community getting its feet back. It was certainly, pardon the pun, what the doctor ordered.”

On Sunday, after Awa and his young helper put the finishing touches on the qaggiq, it was opened up to festival attendees for a short ceremony. Inside, a community Elder lit a traditional oil lamp, called a qulluq, and taught about the traditional meaning of qaggiq, its spirit of renewal, kinship and friendship. Two Inuit Elder women were presented with awards for their lifelong contributions to Inuit song. Another songstress pulled out her ukulele. “It was just amazing,” Pfeifer says.

The qaggiq is a temporary structure; it was taken down the next day due to safety concerns. But both men are hopeful that they can build another next year, and that the festival can become an annual tradition, attracting tourism from outside Iqaluit.

Pfeifer has a broader goal in mind. Although the outdoor performances were a hit, his organization is pushing for territorial and federal governments to fund the construction of a performing arts centre. Nunavut is the only jurisdiction in Canada that does not have such infrastructure. “I wanted people to be reminded that our culture is rich. That we will perform outside if we have to, but we deserve a performing arts centre. We have a very young population, and Inuit are incredible artists.”

A feasibility study last June concluded it would cost $45 million to make this cultural hub happen—a tall order for a territorial government that is strapped for cash and focused on housing, health and education.

But this would be more than a theatre venue, Pfeifer says. A centre could also house a performing arts school and create viable career paths for young Inuit interested in the field, he says. Over time it would pay major dividends for the local economy. “My plan is to help politicians and purse-holders to really appreciate the value of performing arts,” he says. “And hopefully the festival did some of that.”

This article appears in print in the June 2021 issue of Maclean’s magazine with the headline, “House of dreams.” Subscribe to the monthly print magazine here.