How does someone become a saint?

Mother Teresa is due to be named as a saint Sunday. Here's a look at the process that will lead to her canonization. 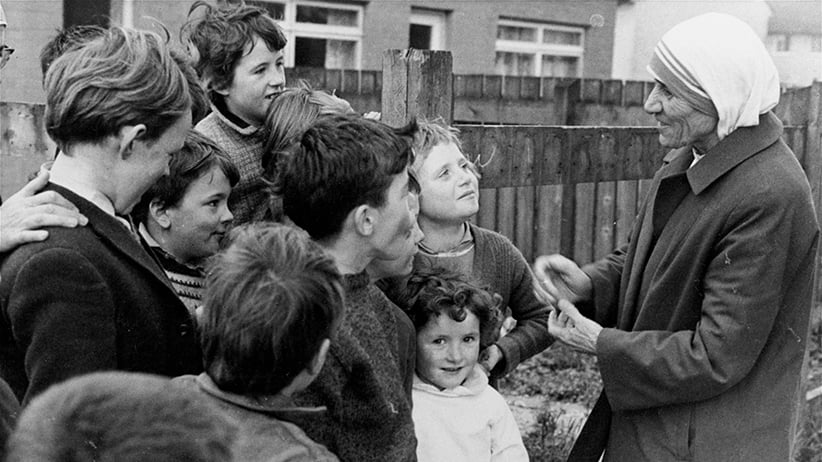 Mother Teresa, the famous missionary from Calcutta, India, who saved many children in the East Pakistan war, making friends with Belfast children, November 6, 1971, where she is to start a mission. (Peter Kemp/AP)

VATICAN CITY – For many of the poor and destitute whom Mother Teresa served, the tiny nun was a living saint. Many at the Vatican would agree, but the Catholic Church nevertheless has a grueling process to make it official, involving volumes of historical research, the hunt for miracles and teams of experts to weigh the evidence. In Mother Teresa’s case, the process will come to a formal end Sunday when Pope Francis declares the church’s newest saint. Here’s a look at the process:

The process to find a new saint usually begins in the diocese where he or she lived or died; in Mother Teresa’s case, Kolkata.

A postulator – essentially the cheerleader spearheading the project – gathers testimony and documentation and presents the case to the Vatican’s Congregation for the Causes of Saints. If the congregation’s experts agree the candidate lived a virtuous life, the case is forwarded to the pope, who signs a decree attesting to the candidate’s “heroic virtues.”

If the postulator finds someone was healed after praying for the candidate’s intercession, and if the cure cannot be medically explained, the case is presented to the congregation as the possible miracle needed for beatification, the first major hurdle in the saint-making process.

Panels of doctors, theologians, bishops and cardinals must certify that the cure was instantaneous, complete and lasting – and was due to the intercession of the saintly candidate. If convinced, the congregation sends the case to the pope, who signs a decree saying the candidate can be beatified.

A second miracle is needed for the person to be declared a saint.

The saint-making process has long been criticized as being expensive, secretive, ripe for abuses and subject to political, financial or theological winds that can push one candidate to sainthood in record time and leave another languishing for centuries.

Pope Francis has raised eyebrows with some rule-breaking beatifications and canonizations, waiving the need for miracles and canonizing more people in a single clip – more than 800 15th-century martyrs – than John Paul did in his 26-year pontificate (482).

Francis has also imposed new financial accountability standards on the multimillion-dollar machine after uncovering gross abuses that were subsequently revealed in two books. The books estimated the average cost for each beatification at around 500,000 euros ($550,000), with much of the proceeds going to a few lucky people with contracts to do the time-consuming investigations into the candidates’ lives.

For the record, the postulator of Mother Teresa’s cause says her case, which stretched over 20 years, cost less than 100,000 euros.

Why is Mother Teresa a saint? And why is she the icon for Pope Francis’ Holy Year of Mercy? For her admirers, it’s obvious.

“Mother is known throughout the whole world for her works of mercy, recognized by Christians and non-Christians alike,” said Sister Mary Prema Pierick, the current superior general of Mother Teresa’s Missionaries of Charity order. “Reflecting about Mother and the life of our mother, we see all the works of mercy – corporal and spiritual – put into action.”

Her biographer, the Rev. Lush Gjergji, said she founded her life on two pillars: “For God and for the human being.”

“She crossed all barriers like castes, races, gender, ethnic, religious, cultural and turned into and remained the mother of the whole civilization,” he said. “In the history of sainthood and that of Christianity, she is the first saint of Hindus, Buddhists, Muslims, non-religious and of course for Christians.”

She was not beloved by all, however. She was criticized for the quality of care in her clinics and accused of taking donations from Haitian dictator Jean-Claude Duvalier and disgraced American financier Charles Keating.

Mother Teresa is most often associated with St. John Paul II, who was pope during the heyday of her work. But Pope Francis seems more a pope in her likeness, eschewing the Apostolic Palace for a simple hotel room, focusing his ministry on the most marginal of society and travelling to the peripheries to find lost souls – just as Mother Teresa did.

In one of his first public audiences after being elected pope in 2013, Francis said he longed for a “church that is poor and for the poor.”

“Right from the beginning we said, ‘Oh wow, this is a really an ‘MC’ pope!” said the Rev. Brian Kolodiejchuk, the MC (Missionaries of Charity) priest in charge of the cause. “He would have been one of our best members – if he hadn’t joined the Jesuits.”

That Francis is crowning his Jubilee Year of Mercy with Teresa’s canonization is evidence that he sees her as the model of the merciful church he envisions.

“There will be other canonizations, but this (is) perhaps the key canonization in what is the key year, the Year of Mercy,” said the Vatican spokesman, Greg Burke.

With more than 100,000 people expected to jam St. Peter’s Square on Sunday, including at least 13 heads of state or government, security is an obvious concern given that the Islamic State group has said Rome is their ultimate target as the seat of Christianity.

For months now, police have closed to traffic the main boulevard leading to the Vatican. In anticipation of the throngs expected Sunday, Rome police have added an extra 1,000 officers, many of them anti-terrorism teams, to a law enforcement force that has already been beefed up by 2,000 for the Jubilee year.

The security plan calls for the area around St. Peter’s to be divided into three areas with reinforced controls starting Saturday night and lasting through Sunday. The airspace over the Vatican and surrounding areas will be closed.