How much police trespassing is permissible?

Police argue they can wander into your backyard without permission. A court will put that to a test. 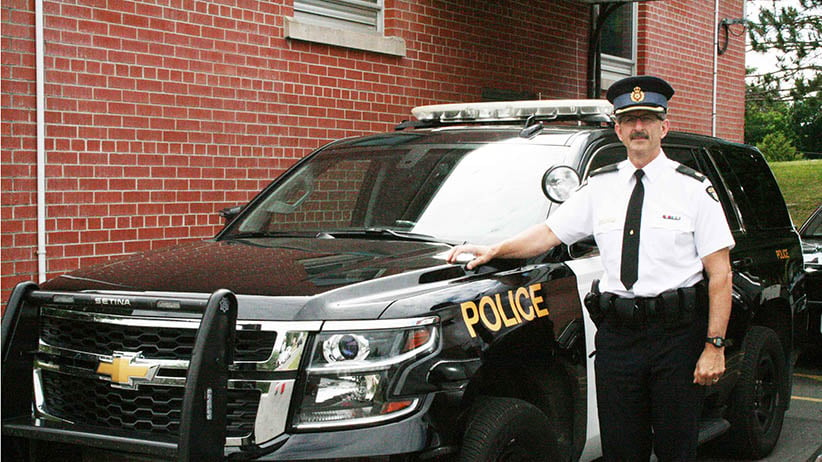 The police had their evidence bagged and marked—two marijuana plants plucked from a backyard in Bracebridge, Ont., their location discernible only if one ventured alongside a garage near the back of a neighbouring lot. On Sept. 4, 2012, two Ontario Provincial Police officers did just that, creeping up the gravel driveway of the lot next door in their cruiser, photographing the pot with a smartphone while gathering “observations” they’d later use to obtain a search warrant. Seizures and arrests would follow—a young couple leasing the property where the cannabis grew was charged with production and possession of marijuana. But when the case went to trial, it hit a wall: the officers, it turned out, had neither permission nor a warrant to be prowling around the property next door.

So the plants were tossed from evidence, and both accused were acquitted, leaving everyone on the defendants’ side of the courtroom wondering what the investigating officers had been thinking. One of them, Det.-Const. Randy Graham, admitted in testimony that observing objects and activity from adjacent land, sans permission, was something he and his OPP colleagues did on a routine basis.

His nonchalance on the point drew rebuke from provincial court Justice J.C. Crawford, who warned in his decision of an “apparent blind spot in the police understanding of their right to enter property without consent.” But for Bracebridgians who assumed their privacy rights held no matter how suspect their neighbours, it raised a more basic question: Who led the officers to think it was okay?

Their boss, perhaps. After the decision came down, Insp. Edward Medved, the commander of the Bracebridge OPP detachment, publicly backed Graham, describing trespassing as “one of many investigative techniques used by police,” and suggesting there was nothing wrong with it. “If there was something amiss,” he told the Bracebridge Examiner, the Crown “would bring it to my attention.” Flying as they did in the face of Crawford’s interpretation, Medved’s statements read like a challenge. The authority of the courts might prevail on paper, he seemed to be saying, but in the complex and often confusing sphere of real-world policing, officers need some licence to do their jobs.

Whichever view prevails, legal experts want some clarity, post-haste. Next month, Ontario Superior Court will hear the first arguments in an unorthodox plea to have Medved slapped down, through a declaration that so-called “next-door neighbour searches” violate the right of occupants to be secure from unreasonable police intrusion.

Neither the Crown nor the police can provide legal grounds for the practice, says John Fitzmaurice, the Toronto lawyer who filed the application, and who defended the accused couple in the Bracebridge case: “People have a reasonable expectation of privacy on their land. If you’re going to invade that privacy, you’d better get a judge to authorize it.”

Turning a blind eye, he adds, could produce an absurd scenario where people suspected of criminal activity—in which case police would definitely need a warrant—enjoy a greater expectation of privacy than their law-abiding neighbours. And he’s not the only one with qualms. The Ontario chapter of the Criminal Lawyers’ Association (CLA) has asked to intervene in the case, saying it raises a “critical and novel issue” of a citizen’s right to challenge unconstitutional state action. “The fundamental question is about police power,” says Philip Campbell, a lawyer representing CLA pro bono. “That’s always a critical thing to define in a free society.”

It’s a case sure to attract attention of police officers, many of whom assume law-abiding neighbours would tolerate cases of minor encroachment in the rare event they heard about them. Typically, police are able to find an occupant, flash a badge and freely peek across the fence, says Fred Iannuccilli, a retired Toronto police officer who obtained scores of warrants during his 36-year career. When no one’s around, he says, they proceed on a variation of an old legal principle known as “colour of right”—the idea that a person acting with an honest belief that circumstances require his actions can justify what he’s done. “You actually get taught this in police college,” says Iannuccilli, now a private investigator. “You have the belief that you’re not doing anything wrong.”

But Medved’s assertion has left others in law enforcement scratching their heads. Any venture onto property aimed at building a criminal case must be backed by a warrant, says Alex Fishbein, a former Halton Regional Police officer who worked in fraud, cybercrime and organized units. “Even if you have permission from the owner, you might be circumventing the judicial process.” In the Bracebridge case, he adds, the officers could have obtained a so-called “general warrant,” which would allow them to walk around buildings on a property looking for information that could later support a full search warrant. Doing so from the neighbour’s place without consent, says Fishbein, “is not common practice.”

Still, it seems strange that opinions are divided some three decades after the Supreme Court issued its first decisions on search and seizure in the post-Charter era. Were it not for the unique circumstances of the Bracebridge investigation, it might have lain fallow much longer. Graham and his partner had the misfortune to be treading on a lot owned by the father of one of the accused, who was renting the home out and testified at trial that he would have denied the OPP entry if he had been asked. Richard Thompson, 57, told Maclean’s last week that he regarded the police pursuit of his daughter, Lisa, and her common-law husband, Cody Murphy, as petty, and was stunned to learn the officers had been on the neighbouring property he owns. “If I was coming to your place, I couldn’t just start searching around,” he says. “You wouldn’t like that.”

Fitzmaurice, however, is quick to acknowledge the law’s near silence on that point—it’s one of the reasons he’s going to court. Legislation offers exceptions to the warrant requirement in “exigent circumstances,” such as when someone is in physical danger, he notes. But almost all of the search-and-seizure cases that have gone through the courts to date deal with the rights of suspects and not their neighbours. So even though Fitzmaurice’s application deals strictly with the conduct of the OPP in the District of Muskoka, he believes it raises concerns for all Canadians. Trespass laws in most provinces prohibit entry onto premises with such indicators of habitation as fences, lawns, gardens and trees. (In Ontario, breaking them is punishable by up to $10,000 in fines.) Are we content to let police bend them, as long as they’re investigating crimes? Where, if anywhere, should we expect them to draw the line? At the edge of our lawns? At the thresholds of our homes?

Fraught questions, all, which the OPP and the Ontario attorney general’s ministry are disinclined to address. Success for Fitzmaurice, after all, could add another degree of complication to the burdensome task of busting bad guys, yet no government is about to go on the record in favour of cops wandering backyards without warrant or permission. For now, provincial lawyers are trying to short-circuit the case, arguing Fitzmaurice lacks the factual foundation to bring this question to court. Medved referred questions to OPP headquarters in Orillia, where a spokesman declined to comment because the case is before the courts.

Fitzmaurice, meanwhile, is getting some cost-efficient help. The Innocence Project, a program to help the wrongfully convicted at York University’s Osgoode Hall Law School, has been recruited to argue the case, with its director, the well-known constitutional lawyer Alan Young, working pro bono.

If Fitzmaurice gets past the first set of legal hurdles, he can certainly count on the testimony of one angry property owner. Since his daughter and her boyfriend were charged, Richard Thompson has been doing a slow burn, convinced that local police have too long considered themselves above laws that everyone else must obey. “We’re given rights for certain reasons, and the right to privacy has been getting trampled,” he says flatly. “Nobody I know wants the police running around their yard and doing whatever they please.”