How much protection does the first dose of the COVID-19 vaccine provide?

Vaxx Populi: Israel has seen a precipitous drop in infection and hospitalization rates among those who've received a first dose, after 14 days 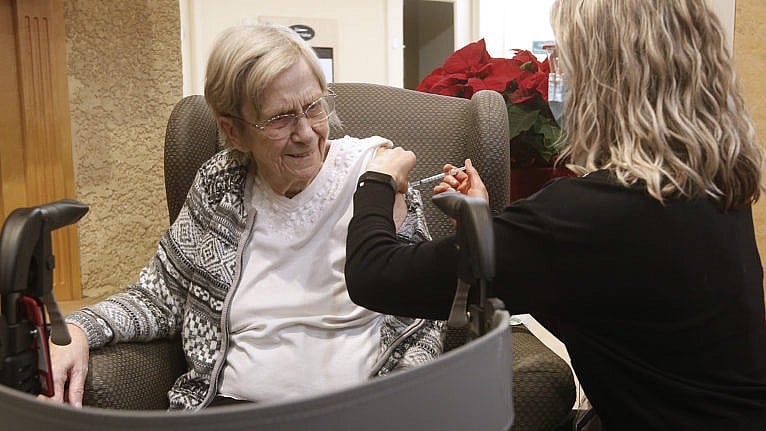 Paramedic Jessi Bittner inoculates Margaret Watson, 94, a resident at Oakview Place Long Term Care Residence, with her COVID-19 vaccine in the Winnipeg care home, Monday, January 11, 2021. Watson was the first member of the public to receive the vaccine in Winnipeg. THE CANADIAN PRESS/John Woods

Clinical trials for the two COVID-19 vaccines approved for use in Canada showed that they provide some protection after the first dose—Pfizer’s showed an efficacy of 52.4 per cent between the first and second doses, taken 21 days apart, while Moderna’s efficacy was 80.2 per cent between doses, taken 28 days apart. (Efficacy is the relative reduction in infection for those who are vaccinated compared to those who aren’t.)

Now, Israel is starting to provide real-world answers about how much protection the first dose affords. Israel has given at least one dose of the Pfizer vaccine to roughly 40 per cent of the population. Clalit, the country’s largest health services organization, compared two groups of 200,000 members who are 60 years and older—one group had been given their first dose of the vaccine and one hadn’t received it yet. For the first 12 days, the rate of those testing positive for COVID-19 was “relatively constant” for both groups. Then, “on day 14 post-vaccine, a statistically significant drop of 33 per cent in PCR positivity was witnessed in the vaccinated,” explained Ran Balicer, an epidemiologist and executive at Clalit Health, in a Twitter thread.

RELATED: Why is there a hold-up with Pfizer’s COVID vaccines?

While the Clalit findings showed a lower efficacy than the Pfizer clinical trial, Balicer offers some explanations: the Clalit preliminary data is raw; it doesn’t account for the full 21 days between doses; and, perhaps most importantly, it only looked at those 60 and older, while the trials included adults 16 and older.

Another Israeli health organization, Maccabi, followed 50,777 members ages 60 years and older who got their first Pfizer doses in December and compared their infection rates to all its 480,000 senior members. The infection rates were about the same for both groups until roughly day 12, at which point infections among the general group stayed high while those for the vaccinated group began dropping, hitting a 60 per cent drop at day 23, or two days after people had received their second dose of the vaccine.

“It’s a ray of good news,” says Jean-Paul Soucy, a Ph.D. epidemiology student at the University of Toronto and co-creator of the authoritative COVID-19 in Canada website, of the early information out of Israel. In particular, he notes “the quite precipitous drop” by around 60 per cent in hospitalizations of new COVID-19 patients in the Maccabi data. Still, he finds the news to be “slightly bittersweet,” given there are many parts of Canada where long-term care residents still haven’t received their first doses.

For all the good news, experts caution against thinking that the first dose is any sort of guarantee against getting COVID-19. Soucy notes that no one should expect much protection during the first two weeks when there’s little immune response in the body. “Don’t go galavanting about,” he warns, cautioning that protection will be “partial at best” before the second dose takes effect.

And again, there are real-world examples: In mid-January, long-term care homes in Quebec reported COVID-19 infections in residents who had received the first dose of either the Pfizer or Moderna vaccine. And, after the Jan. 6 insurrection at the Capitol in Washington, D.C., politicians who spent hours in crowded safe rooms together began announcing they’d tested positive for COVID-19 even though they’d received their first doses of vaccine a few days prior to the riot.

And even though Israel has vaccinated a larger percentage of its population than any other country, it is still struggling with its third wave of cases, as the more contagious B.1.1.7 variant spreads in the population. In addition to a national lockdown, Israel stopped most international flights on Jan. 25.

The really good news is that the efficacy of the two-dose Pfizer vaccine may be higher than the 95 per cent indicated in its clinical trials. On Jan. 25, the Israeli government and Maccabi released new raw data which found that out of 428,000 Israelis who had received their second doses, only 63 (or 0.014 per cent) had contracted the virus as of a week after that crucial second dose, the New York Times reports.