How new-NAFTA could still go bad

The deal is done but it's not official. Approval in each country could take many months, and given the state of U.S. politics, it's not guaranteed. 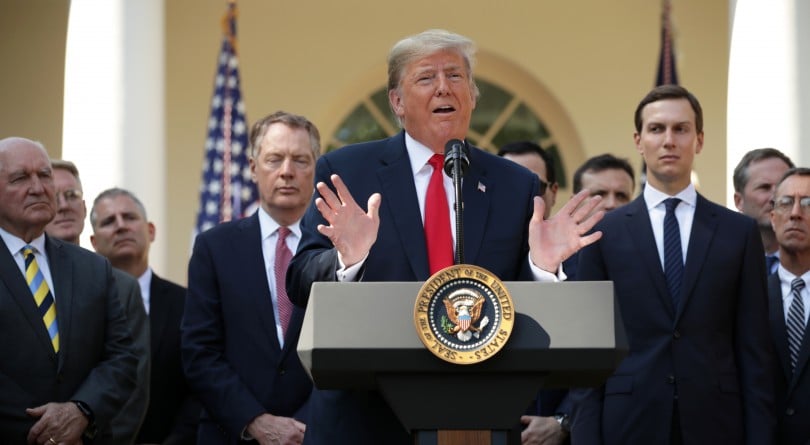 U.S. President Donald Trump speaks during a press conference to discuss a revised U.S. trade agreement with Mexico and Canada in the Rose Garden of the White House on Oct. 1, 2018 in Washington, DC. (Chip Somodevilla/Getty Images)

NAFTA-by-another-name was salvaged by an eleventh-hour—literally, almost—agreement reached the night before the deadline, prompting a big exhale of relief from government negotiators, financial markets and manufacturers, along with angry gnashing of teeth from dairy farmers and a few others who feel slighted in the deal.

But it’s all set now, right? Guaranteed smooth and tariff-free sailing from here?

President Donald Trump says he and the other two leaders plan to sign the United States-Mexico-Canada Agreement (USMCA) by the end of November. On Dec. 1, Mexico’s outgoing president, Enrique Peña Nieto, leaves office to make way for his successor, Andrés Manuel López Obrador, so they want to sign before that happens; a member of the Mexican negotiating team told a Mexican television station that the G20 meeting in Buenos Aires at the end of November is the likely venue for the official inking.

The agreement must then be ratified by the legislatures of each of the signing countries before it would take effect and replace NAFTA. The timeline is tight for Prime Minister Justin Trudeau’s government to get everything through and implementation legislation in place before the House rises in June 2019 in advance of next year’s federal election, but it’s doable. López Obrador has indicated he will not try to renegotiate the deal his predecessor worked out.

In the U.S., the approval process won’t begin until next year, because of the midterms. By then, the House of Representatives and Senate that will have to ratify the deal—both currently controlled by the Republicans—may have gotten serious makeovers thanks to the elections that are now just over a month away. Historically, the party occupying the White House loses seats in the midterms, even when the actual occupant of 1600 Pennsylvania Avenue is not as fraught a figure as the current guy.

Indeed, even as he thumped his chest with characteristic modesty and restraint on Monday, Trump seemed to acknowledge that he could face a challenge getting the deal approved. “In theory, there should be no trouble—but anything you submit to Congress is trouble, no matter what,” he said. “It’s the single greatest agreement ever signed, but they’ll say, ‘Well, Trump likes it, therefore we’re not going to approve it because that’ll be good for the Republicans, so therefore we can’t approve it.'”

But assuming all three countries do ratify the USMCA, there is still an escape hatch that could scuttle it down the road.

In the Monday press conference in which Trudeau and Foreign Affairs Minister Chrystia Freeland spoke about the freshly-inked deal, they were asked about the “non-market economy clause.” That gives any of the three countries the right to walk away if one member nation enters into a trade agreement with an outside country and another doesn’t like the looks of it.

READ MORE: NAFTA? USMCA? Trumpta? What should we call this new deal?

The question was framed in terms of asking whether that effectively gave, say, the U.S. veto power over Canada striking some sort of deal with China. But Freeland downplayed that possibility for slightly more anarchic reasons. Article 2205 gives any party the right to walk away from the USMCA—which Freeland referred to repeatedly as NAFTA, in a tiny branding exercise that seems likely to annoy the shouty tangerine fellow south of the border—any time and for any reason with six months’ notice, she noted, so the non-market economy issue doesn’t matter much on its own.

“You don’t need a reason to leave and you shouldn’t, you know,” she said. “Each country should have the right to make a sovereign decision about whether it wants to remain in a trade agreement. That has always been the case with NAFTA. It continues to be the case with NAFTA.”

So, as long as the people involved in making decisions about this thing aren’t completely capricious or prone to fits of early-morning pique manifested on the Internet, everything is good to go.