How one man with a kite disrupted Victoria air traffic

Neil Parman has been sending kites high—really high—since his mid-20s. His obsession comes with the occasional spot of legal trouble. 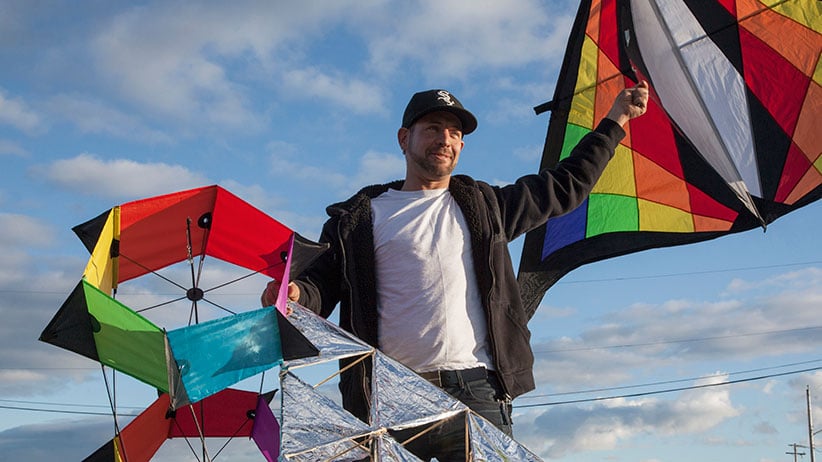 A wide open, green field is hard for Neil Parman to resist. So when the 40-year-old mobile crane operator recently spied a grassy expanse in Esquimalt, B.C.—just behind École Victor-Brodeur, near the Tim Horton’s where he was having a coffee with a friend—Parman went straight to his vehicle. “I went out there and threw up a kite for a little bit,” recalls the Nanaimo resident, who always takes a few kites with him when he’s working out of town.

Parman had been working in Esquimalt painting a cruise ship in dry dock. On that day, Dec. 5, he was killing the afternoon before a night shift when he decided to launch his $82 Clarke’s Crystal Box kite. The fibreglass-framed kite, with triangular, multicolored panels, is shaped somewhat like those old paper fortune-tellers or “chatterboxes” that you open and close on your fingers and which can supposedly can tell you whether someone loves you. Victoria police didn’t love Parman.

He’d been flying for three hours when the cops showed up. By then, kids on lunch hour had filled up a nearby bleacher, and he was letting a few of them tug on the string to feel the pull as his kite soared. One officer had his hand on his Taser, according to Parman, and they ordered him to start reeling.

As it turned out, Parman was flying across the nearby water from a Flight Services Station in a small tower operated by Nav Canada, which runs air traffic control operations across the country. A flight services specialist at the water aerodrome overlooking Victoria Inner Harbour Airport had seen something unusual bobbing up and down about 300 metres up in the sky (that’s 72 metres higher than the peak of Mount Douglas, a popular destination for Victoria-area hikers). Whatever it was—balloon or kite, the observer thought—it could pose a risk to seaplanes landing and taking off from the harbour.

Though some media reports at the time said Parman’s kite caused “havoc” with incoming and outgoing flights, officials say that wasn’t quite the case. “There were actually two flights that were moderately affected,” Ron Singer, a Nav Canada spokesperson, told Maclean’s. “One aircraft was approaching the harbour and we cautioned him to maintain an altitude of 2,500 feet for safety. And the next inbound aircraft a few minutes later, we actually redirected his route to fly over the harbour and avoid the west side altogether.”

Still, Transport Canada, which enforces regulations, is investigating whether Parman could be charged and fined for breaking new rules requiring drone operators and others flying unmanned objects in the sky to stay at least 5.5 kilometres away from airports, and keep their contraptions below 90 metres. Violators can face up to $25,000 in fines or even prison under the federal Aeronautics Act. “Transport Canada will not hesitate to take appropriate action if any issues affecting aviation safety are identified,” the agency said in an email. Though, it added: “The department is not aware of any flight being affected by the incident.”

Parman began seriously flying kites at 25 when he joined a friend flying a single string kite. “He got one up a little ways and that sort of inspired me.” Parman, who once invented a thing called the “Head Sled”—a low-slung sled with a pair of bicycle wheels in front that can be used on land or roads and appears designed to give riders the ultimate concussion – was unimpressed by how high his friend’s kite flew. “I knew I could beat that fairly easily.” 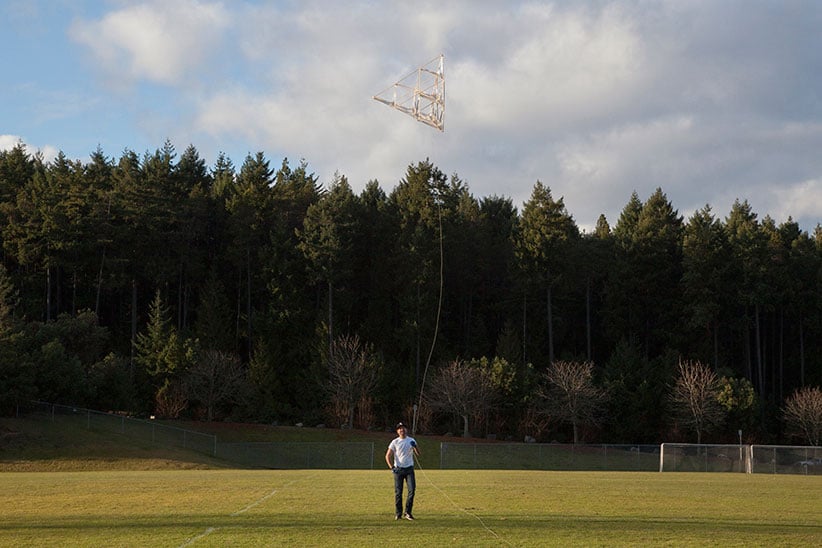 He’s been buying and building his own kites ever since. He now has about 40, and rigs them with a GPS unit to measure some of his highest flights; to date, he’s reached an altitude of about 3,200 metres. Parman uses a custom made electric cord-winder as his spool and paid nearly $500 for  the thousands of metres of 100-pound test Trilene line he uses with with his higher flying kites. For him, kiting is therapeutic. One day he hopes to break the Guinness World Record attitude of 4,878.54 metres for a single string kite, set in 2014 by Robert Moore in Cobar, Australia.

Parman doesn’t think his Crystal Box was high enough in Esquimalt to mess up seaplane traffic. “I am not trying to cause grief from airplanes,” he says, adding he knows about the five-kilometre rule.

Still, this isn’t the first time Parman has caused a kerfuffle with his kites. He was once nearly arrested for causing a disturbance in Nanaimo for flying a kite over a mall and potentially distracting drivers, though he likely exacerbated the situation by refusing to show police his I.D.

Last year in Nanaimo he flew a kite at 1:30 a.m. with a number of flashing LED headlamps tied at various intervals along the string and blinking weirdly in the starry February sky. That triggered a flood of UFO reports to Nanaimo RCMP. Parman admits that, when he works in a new town, he gets a kick out of launching late-night kite flights with their blinking lights, just to see how the locals react. (And last August Parman was day-flying off the beach in Tofino when a 10-year old boy named Xavier started peppering him with questions about his kite, asking if he might hold the reel. Eventually, the boy’s father walked up in a wetsuit, toting a surfboard. It was Justin Trudeau.)

Night flying isn’t an uncommon practice among kite enthusiasts, though most are likely in bed by one a.m.  Dianne O’Brien, a workshop coordinator with the British Columbia Kitefliers Association who teaches school children how to build and fly kites, does it herself as part of a team. She says choreographed night flights to music are often a favorite part of kite festivals in Canada and the U.S.

A retired nurse, O’Brien, 72, got hooked on flying two-string “control” kites in her 50s. She says the BCKA’s 80 members across the province are made well aware of rules against flying kites near airports. “For one thing there is written on every commercial kite that you buy, “Do not fly within five kilometres of an airport.”

Parman isn’t particularly concerned about being charged by Transport Canada. “I am kind of looking forward to it, though I’d be surprised if it happened,” he says. “I’d like to defend my right to fly.” O’Brien’s advice to him if cops tap him on the shoulder the next time he’s reeling out hundreds of meters of line? “Well, I certainly wouldn’t be lippy with the police.”