How soon are second doses coming for Canadians, and who will get them first?

Vaxx Populi: The four-month interval between doses is ticking away for Canadians, while new research is emerging about the optimal time to wait 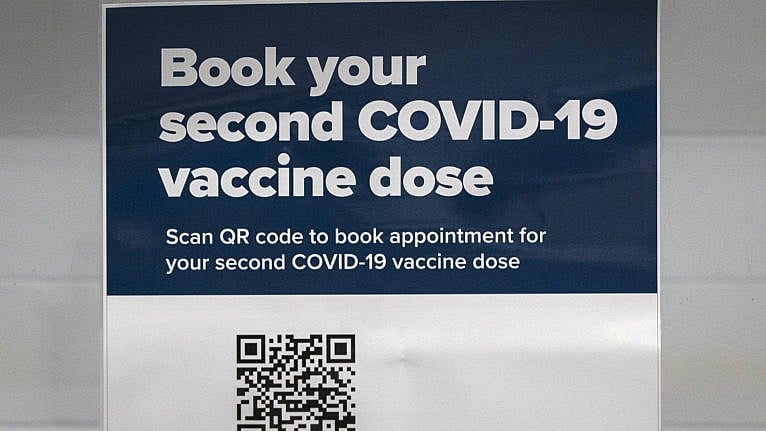 Information how to book the second shot for the COVID-19 vaccine at the Invista Centre in Kingston, Ontario on Monday, March 1, 2021, as the COVID-19 pandemic continues across Canada and around the world. THE CANADIAN PRESS IMAGES/Lars Hagberg

As Canada continues to vaccinate more and more of its population, focus is shifting to the complicated next phase of the immunization plan: second doses. Right now, more than 53 per cent of the country’s population has received at least one dose, but only 4.6 per cent are fully vaccinated. That latter number is climbing: around one sixth of all doses administered on May 26 were second doses. At the same time, provinces are compressing the four-month interval between doses that is ticking away for Canadians, especially those who received their first shots earlier this year, while new research is emerging about the optimal time to wait.

Getting a sizable chunk of the population fully immunized is crucial for summer reopening plans. According to Canadian federal modelling, it’s only when 75 per cent of eligible Canadians have first doses plus 20 per cent have second doses that the Public Health Agency of Canada believes reopenings can occur without putting the health care system at risk from another wave.

So what is the plan for getting second shots in arms?

Possible danger ahead: Variants of concern

The focus on second doses is also intensifying because experts are worried about the B.1.617.2 variant of concern (VOC) that was first detected in India. A new preprint study by Public Health England (PHE) found that while both the Pfizer and AstraZeneca vaccines held up against B.1.617.2 compared to the established B.1.1.7 VOC, effectiveness was noticeably better after two doses compared to after one.

RELATED: What we know about the COVID variant first found in India

Who is first in line for second doses?

The authors of the PHE preprint study concluded that their findings “would support maximising vaccine uptake with two doses among vulnerable groups.” That approach has already started in Canada. Even before unveiling plans for widespread second-dose rollouts, provinces were prioritizing second doses for Indigenous populations, front-line medical workers as well as those with high-risk medical conditions such as recipients of organ transplants or people with immune disorders.

New research has led to more at-risk people being added to the priority list. Earlier in May, a study in the Canadian Medical Association Journal revealed that first doses of the Pfizer vaccine “failed to elicit a humoral immune response in most patients receiving hemodialysis.” Its authors suggested that dialysis patients be prioritized for second doses at the original 21-day interval, a recommendation which Ontario, Manitoba and other jurisdictions adopted.

As of now, 88.7 per cent of seniors 60 and older have received first doses, while only 9.3 per cent have received second doses, according to estimates by Trevor Tombe, an associate professor of economics at the University of Calgary. Most fully vaccinated seniors live in long-term care and retirement homes. Seniors living at home, who were at the head of the line for first doses when vaccination efforts geared up in February and March, wound up having to wait for second shots when the dosing interval for most Canadians was extended up to four months.

Seniors who are 70 and older should be next in line for second doses, says Dr. Nathan Stall, a geriatrician at Sinai Health in Toronto and co-author of an opinion piece in the Globe and Mail on May 26: “Older adults, after all, have borne the brunt of the pandemic. Despite accounting for just 12 per cent of the Canadian population, people over 70 have suffered more than 85 per cent of all COVID-19 deaths in the country. One dose of an mRNA COVID-19 vaccine does provide substantial protection against symptomatic infection, even among older adults. But the immune response to vaccination is significantly lower in older adults, and effectiveness increases from 60 to 70 per cent with one dose to 85 to 90 per cent with two.”

A few weeks ago, researchers at the University of Birmingham in England released details from a preprint study that showed delaying the second Pfizer dose up to 12 weeks is best for those 80 and older. In particular, such a delay from the usual 21-day mark increased the “antibody response 3.5-fold compared to those who had the second vaccine at three weeks,” the researchers wrote, adding, “The team concluded that extending administration of the second Pfizer vaccine to 12 weeks potentially enhances and extends antibody immunity, which is believed to be important in virus neutralisation and prevention of infection.”

RELATED: Why some people feel COVID vaccine side effects and others don’t

As well, the dosing interval of the AstraZeneca vaccine, which was 28 days during its phase 3 trials was shifted to 12 weeks in Britain after researchers discovered that AstraZeneca is a “slow burn” vaccine that takes time to build its strength. After a first dose, the immune response keeps growing to around 76 per cent efficacy, then, after a second shot at around 12 weeks, climbs further, reaching an efficacy of 82.4 per cent. In contrast, if doses were given less than six weeks apart, the efficacy was around 54 per cent, according to a pre-print for the Lancet.

A 12-week dosing interval is being used in Ontario for the vast majority of its second doses of AstraZeneca, which are now being administered to those who received a first shot in March.

Saskatchewan, which was the first province to unveil its detailed reopening plan, was the provincial leader in second-dose planning as well. It will distribute second doses according to age and priority groups, and the interval will be compressed from the previous 16 weeks to 13 weeks or earlier, based on vaccine supplies. The province has provided a handy table so everyone can figure out approximately when doses will be distributed. For example, those vaccinated around March 15 can expect second doses by May 31.

Quebec, similarly has a simple online appointment portal, Clic Santé. A source told the Montreal Gazette: “They are now working on the Clic Santé system so that you will be able to go on it and say, OK, ‘I’d like to have an appointment on such and such a date,’ which is a month or two before the appointment booked previously, and it will automatically cancel that one.” On Tuesday, Health Minister Christian Dubé said that residents of long term care homes have already received second doses while those in private seniors buildings should get second shots by the end of May. He hopes everyone can be fully vaccinated by the end of August.

On May 21, Ontario announced that it was restarting its administration of the AstraZeneca vaccine, but only for second doses. Those who first got the vaccine during the pilot phase of the rollout between March 10 and 19 could book an appointment for a second dose starting the week of May 24. But the actual administration of those second shots was less than smooth. On May 25, as Ontarians scoured pharmacy and government sites for information, Justin Bates, the head of the Ontario Pharmacists Association took to Twitter to plead for patience, explaining that deliveries to most pharmacies weren’t occurring until the following day and bookings would start after that.

Ontario’s chief medical officer, Dr. David Williams sounded less certain as to when Ontario would roll out a detailed second dose plan, explaining that the province didn’t want people getting second doses while others are still queuing for first doses. “We want it done as soon as we can and we’ll let you know on that,” he said.

Yet, second doses are going to have to start soon in Ontario, which has fully vaccinated fewer than 600,000 of its 15 million people. Ontario’s reopening plan, which was unveiled last week, requires “70 per cent of adults vaccinated with one dose and 20 per cent vaccinated with two doses” for the province to proceed with Step 2, likely in early July.

The logistics challenge of second doses

The complications are easy to see: while provinces continue to give out as many first doses as fast as possible, they must also ensure people get the correct second doses of the right vaccine at the right time. And research into optimal intervals continues to evolve.

Other countries further ahead of Canada in administering vaccines have experienced a drop in first doses when attention shifts to second doses, in part because deliveries are finite, meaning jurisdictions have to juggle how many first doses to administer compared to time-sensitive second shots. For example, in Britain, which has its own “first dose first” plan, second doses now outnumber first doses by a 2:1 rating. So even though it just opened first-dose eligibility to those 30 and older in England and Scotland, the country administered 392,000 second doses compared to 199,000 first doses on May 25.