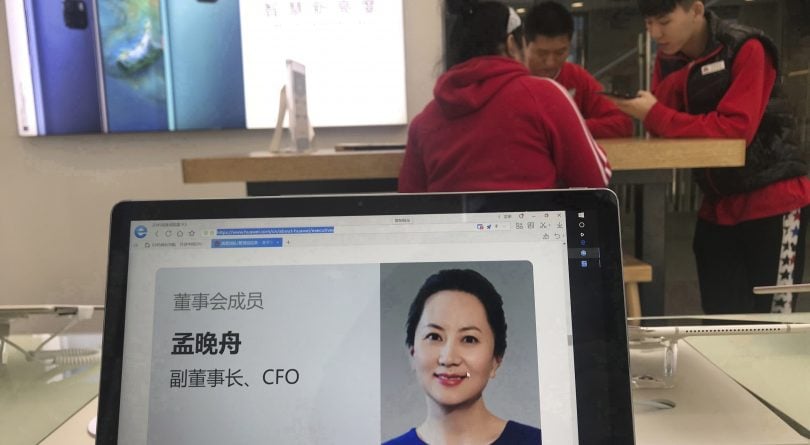 VANCOUVER — A Chinese telecommunications executive is being accused of fraud by the U.S. government, which wants Meng Wanzhou extradited from Canada to face the charge, a bail hearing in Vancouver heard Friday.

The Crown told a B.C. Supreme Court judge that the United States alleges Huawei Technologies used subsidiary Skycom to do business with Iran, violating sanctions against that country.

The Crown says Meng, the company’s chief financial officer, is alleged to have said Huawei and Skycom were separate and she allegedly misled an executive of an unnamed financial institution, which it asserts put the institution at risk.

“Skycom was Huawei. This is the alleged fraud,” said John Gibb-Carsley, representing the Attorney General of Canada. “Skycom employees were Huawei employees.”

The company has said it is not aware of any wrongdoing by Meng and her lawyer, David Martin, said no charge or indictment has been filed against his client, just a warrant.

He said one of the glaring deficiencies in the allegations is that the summary of the case doesn’t differentiate between time periods.

Martin said at the meeting Meng had with a bank that was referred to in a story by Reuters, she explained Huawei owned Skycom for a period of time but it sold the company in 2009. Martin told the court the PowerPoint presentation his client delivered to the bank is supposed to be evidence of fraud, but that claim is “preposterous.”

Huawei sold Skycom before the sanctions became law in the United States under president Barack Obama in 2010, he said.

Martin also argued that the outline provided by Canada does not support the case.

“The allegations contained in this document do not support a prima facie case of fraud against Ms. Meng” or Huawei, he added.

But Martin told the judge Meng is prominent and she would not violate a court order if she were released.

“You can rely on her personal dignity,” he said, adding that to breach a court order “would be to humiliate and embarrass her father, who she loves.”

Huawei is the most prestigious tech company in China and was founded by Meng’s father, Ren Zhengfei.

Martin said two properties in Vancouver worth a total of $14 million could be put up for bail, and electronic monitoring and surveillance-based security could be used, although he said neither would be necessary.

Meng was arrested Saturday while in transit at Vancouver’s airport. The court heard she was en route from Hong Kong to Mexico.

Gibb-Carsley told the hearing that Reuters reported in 2013 that Huawei was operating Skycom, triggering Huawei executives including Meng to allegedly make a series of misrepresentations.

He argued the financial institutions that did business with Huawei were the “victims” of those misrepresentations. It’s alleged that they did not know that they were in effect doing business with Iran and could have faced severe financial consequences, Gibb-Carsley said.

He said there is incentive for Meng to leave Canada, telling the court her father’s net worth is $3.2 billion and she has no meaningful connection to Canada, apart from spending two to three weeks on vacation in Vancouver every summer.

Huawei is the biggest global supplier of network gear used by phone and internet companies, and has been the target of deepening U.S. security concerns. The United States has pressured European countries and other allies to limit the use of its technology.

The U.S. sees Huawei and smaller Chinese tech suppliers as possible fronts for Chinese spying and as commercial competitors. The Trump administration says they benefit from improper subsidies and market barriers.

Meng is a prominent member of Chinese society as deputy chairwoman of the Huawei board. The company is a privately held juggernaut with projected 2018 sales of more than US$102 billion that has already overtaken Apple in smartphone sales.

On TV and social media, commentators likened her arrest to the hypothetical detention in China of a Mark Zuckerberg sibling or a cousin of Steve Jobs.

U.S. and Asian stock markets tumbled after news of Meng’s arrest as it was seen to cause another flare-up in tensions between Washington and Beijing.

Huawei has grown to more than 170,000 employees and does businesses in more than 170 countries since Ren founded the company in 1987.

Meng’s bio on the company website says she joined in 1993 and held various positions across the company, including director of international accounting and CFO of Huawei Hong Kong. She holds a master’s degree from Huazhong University of Science and Technology.

For a period of time she was in charge of Huawei’s successful internationalization efforts.

Meng’s father, now 74, comes from rural roots, according to the Huawei website. His parents were school teachers and he grew up in the remote mountainous town in Guizhou province.

Huawei says Ren was a standout in the Chinese military’s engineering corps, retiring in 1983 when the unit disbanded.

Meng, who also goes by the first name Sabrina, is one of four deputy chairs listed on the Huawei website and one of three women to sit on the Huawei board.