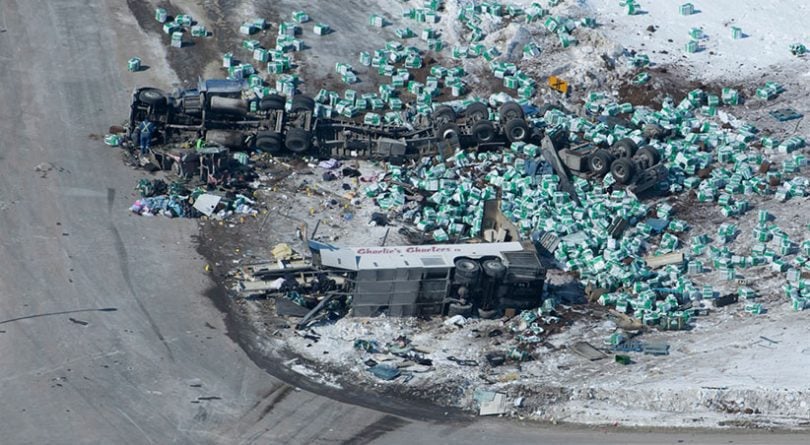 The wreckage of a fatal crash outside of Tisdale, Sask., is seen Saturday, April, 7, 2018. (Jonathan Hayward/CP)

MELFORT, Sask.— A transport truck driver charged in a crash that killed 16 people on the Humboldt Broncos junior hockey team bus has been released on $1,000 bail.

Jaskirat Sidhu, who is 29 and from Calgary, faces several conditions, including that he not drive and that he surrender his
passport.

READ: A tribute to the Humboldt Broncos

He appeared in a Melfort, Sask., court this morning, where the case was put over to Aug. 21.

Sidhu was not hurt in the crash, which happened at a rural Saskatchewan intersection on April 6 as the hockey team was headed to a playoff game.

RELATED: For this ‘hockey wife’ the Humboldt tragedy hits close to home

RCMP have said they will not release any details of the investigation or what they believe happened.

The only thing the Mounties have said to this point is that the truck was in the intersection when the collision occurred.