In fight for Mosul, Kurds get support from Canadians 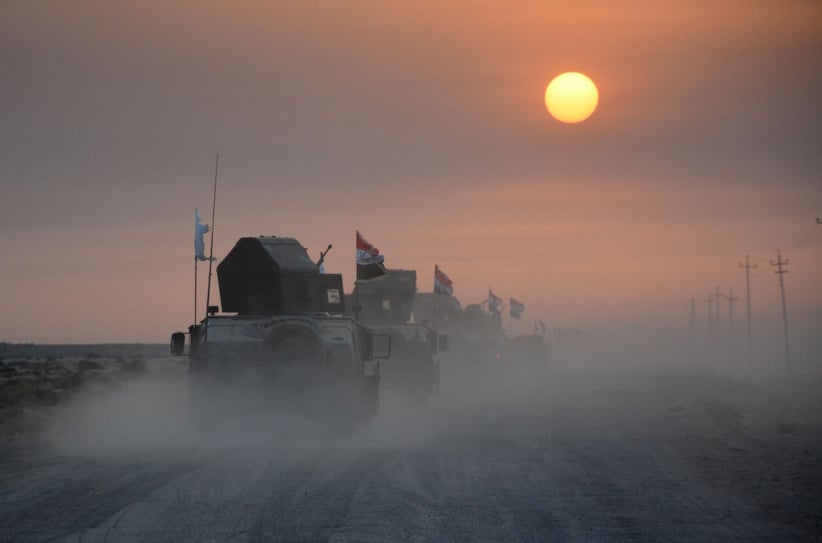 Pro-government forces drive in military vehicles in Iraq’s eastern Salaheddin province, south of Hawijah, on October 10, 2016, as they clear the area in preparation for the push to retake the northern Iraqi city of Mosul, the last Islamic State (IS) group held city in Iraq. (Mahmoud al-Samarrai/AFP/Getty Images)

Kurdish and Iraqi military forces launched the much-anticipated offensive Monday in a bid to free Iraq’s second-largest city from the clutches of the Islamic State of Iraq and the Levant.

The operation is seen as a key moment in the fight against ISIL as the city of more than 1 million is the extremist group’s last bastion in Iraq.

Local media reported that the Kurds, whom Canadian troops have helped train over the past two years, freed several villages during the drive to Mosul. At least six Kurdish fighters were killed and 16 others wounded during the first day of fighting.

Speaking outside the Commons, Sajjan said he was “very proud” of the Iraqi security forces for mounting the operation. “And I’m especially proud of the fact that our Canadian Armed Forces have played an important role in this.”

Asked what role the Canadians are playing, Sajjan said: “Exactly what they’ve been doing before. Making sure that the Iraqi security forces on the ground are able to conduct their operations effectively.”

The offensive comes two weeks after the deputy commander of Canadian special forces, Brig.-Gen. Peter Dawe, revealed his troops were spending more time at the frontlines as a result of the campaign against ISIL shifting from defence to offence.

More: It begins: Iraq begins its march to liberate Mosul from ISIS

While the Liberal government withdrew Canada’s fighter jets from Iraq and Syria earlier this year, about 170 special forces troops continue to work with Kurdish forces in the north of the country.

Their mission has been billed as “non-combat,” though the government says they can shoot in self-defence. Some critics have accused the Liberals of tailoring the definition of combat to fit with promises made during last year’s election campaign.

Officials have since clamped down on the amount and type of information provided about the mission.

The long-awaited offensive to retake Mosul from the Islamic State group began Monday with a volley of U.S.-led coalition airstrikes and heavy artillery bombardments on a cluster of villages along the edge of Iraq’s historic Nineveh plain east of the militant-held city.

Kurdish peshmerga fighters led the initial assault. By the end of the day they had retaken some 200 square kilometres, according to the president of Iraq’s Kurdistan region. Peshmerga commanders on the ground estimated the offensive retook nine villages and pushed the front lines back eight kilometres.

But the hold appeared fragile and the gains largely symbolic. Some of the villages were so small they comprised no more than a few dozen homes, and most were abandoned.

And though some troops were less than 30 kilometres from Mosul’s edges, it was unclear how long it would take to reach the city itself, where more than 1 million people still live. Aid groups have warned of a mass exodus of civilians that could overwhelm refugee camps.

Mosul fell to ISIL in the summer of 2014 as the militants swept over much of the country’s north and central areas. Weeks later the head of the extremist group, Abu Bakr al-Baghdadi, announced the formation of a self-styled caliphate in Iraq and Syria from the pulpit of a Mosul mosque.