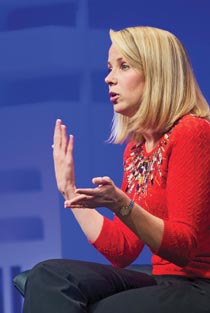 When Yahoo! Inc. named Marissa Mayer as president and CEO in July 2012, it was a very big deal, corporately speaking. Yahoo! poaching the 37-year-old Google executive from its archrival was a major coup; in a press release, the company crowed that Mayer had helped launch “more than 100 features and products including image, book, and product search; toolbar; iGoogle; Google News; and Gmail—creating much of the look and feel of the Google user experience.” Possessed of a smart and sunny demeanour, Mayer was once a visible public face of the search-engine behemoth, famously interviewing Lady Gaga for a “Google goes Gaga” YouTube video in 2011. Much was riding on her ability to turn around the foundering $5-billion tech giant. News of her appointment, which makes her the youngest Fortune 500 company CEO, boded well: Yahoo! stock price rose 2.7 per cent.

Yet what occupied headlines was not Mayer’s stellar professional accomplishments, but her gynecological ones. When she was appointed, the CEO was six months pregnant with her first child (with husband Zack Bogue, a lawyer). When she returned to the executive suite weeks after delivering son Macallister, an inevitable firestorm of debate ensued—one that highlighted the double standard that still applies to mothers, but not fathers, in the top echelons of business.

“Is it fair to make Marissa Mayer a role model for working mothers?” asked the Washington Post. A blogger weighed in: “Can Marissa Mayer avoid the motherhood penalty?”, referring to systemic bias against mothers in the workplace. The only clear answer was that even a privileged woman like Mayer was in a no-win situation: if a short maternity leave made her a neglectful mother, a long one would have made her a neglectful CEO. Again came reminders that high-profile mothers holding top jobs, Facebook’s Sheryl Sandberg among them, are the exception: only 19 Fortune 500 companies are run by women; slightly more than half have children. Further inflaming the discussion was Anne-Marie Slaughter’s controversial cover story in the June Atlantic: “Why women still can’t have it all,” which said the deck was stacked.

Yet, with a net worth of an estimated $300 million and a calendar that includes sitting on the boards of Wal-Mart and the San Francisco Ballet, Mayer appears so far to be defying that edict. She’s been a stealthy trailblazer since she joined Google in 1999 with a master’s degree in artificial intelligence from Stanford. As its first female engineer (and 20th employee), she thrived—and became an inspiration for a generation of women. As Lady Gaga told her in their 2011 interview: “All of my girlfriends wanted to get jobs here.”

Along the way, Mayer carefully navigated gender stereotypes. Though she names Sam Walton and Steve Jobs as her heroes, she also expresses admiration for fashion designer Oscar de la Renta, once paying $60,000 at a charity auction to have lunch with him. As Vogue wrote in a fawning 2009 profile of Mayer: “Objects that make Mayer happy include her Oscar de la Renta cashmere cardigan with three-quarter sleeves and pointelle detailing and enamel buttons.”

After Mayer presciently made the prediction in 2003 that cupcakes would be a major trend, making spreadsheets to determine the perfect recipe, she laughed off the constant association with them: “Truth is, there’s other sweets I like far more, like vanilla fudge,” she told San Francisco magazine. She’s also deft in neutralizing sexist interview questions: when Charlie Rose asked her about biases against women in technology, she responded brightly: “Silicon Valley is a great place for women.” In an interview with CNN in April 2012, she said: “I’m not a woman at Google. I’m a geek at Google,” adding: “If you can find something that you’re really passionate about, whether you’re a man or a woman comes a lot less into play. Passion is a gender-neutralizing force.”

Mayer, who refuses to comment on how she balances work and family, has spoken instead of how she wants Yahoo! to innovate by creating new platforms on social networking and mobile devices that give people information about their immediate surroundings. She’s already doing that herself in reframing imagery surrounding motherhood in the executive suite. Shortly after starting at Yahoo!, she proudly tweeted a photo of a baby gift from some of her new staff members—a Yahoo!-themed layette set. Recently she sent her 249,000 followers a photo of her and baby on the way to the Yahoo! Halloween party, YaBoo. Macallister was dressed adorably as a chili pepper. Take that as you will.