Downie given eagle feather and swaddled in tar blanket, showered in indigenous gifts such as moccasins and blankets 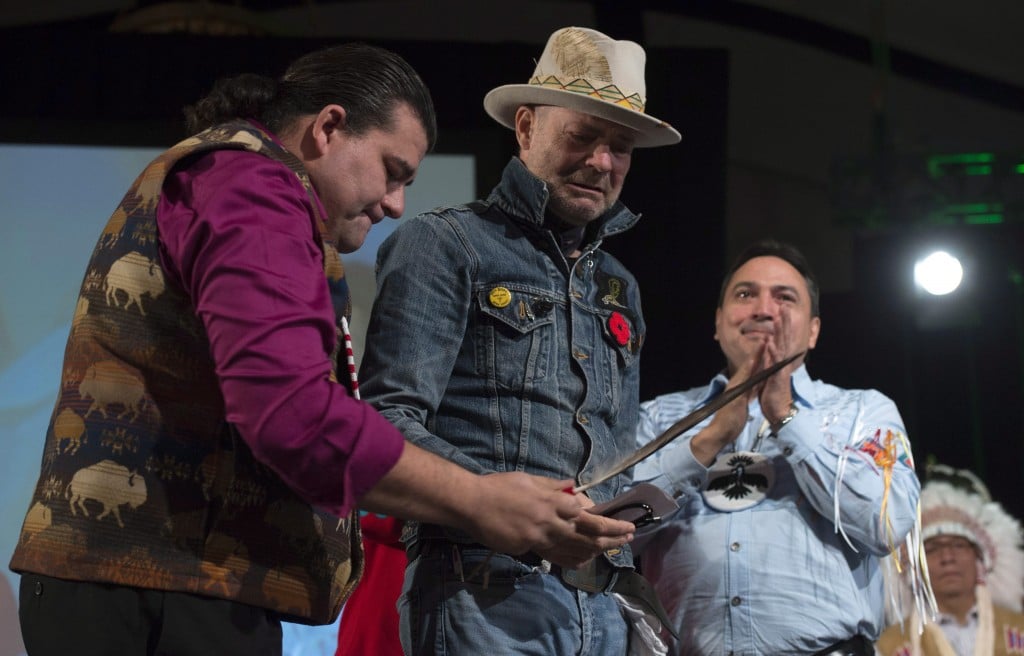 Assembly of First Nations Chief Perry Bellegarde looks on as Lakota Sioux Donnie Speidel (left) honours singer Gord Downie with an eagle feather and name at the AFN Special Chiefs assembly in Gatineau, Que., Tuesday December 6, 2016. Downie was given the name “The Man Who Walks Among the Stars,” during the ceremony. THE CANADIAN PRESS/Adrian Wyld

GATINEAU, Que. – A frail-looking Gord Downie wept openly, wiping tears from his eyes, as indigenous leaders paid tribute to the ailing Tragically Hip frontman Tuesday for his efforts in forcing Canada to confront the legacy of residential schools.

Prime Minister Justin Trudeau stood nearby and watched as Downie, who has been diagnosed with a rare and incurable form of brain cancer, was honoured in a ceremony during the Assembly of First Nations special assembly in Gatineau, Que.

Trudeau, who has long championed a new relationship with Aboriginal Peoples, was there to unveil plans for an Indigenous Languages Act in hopes of preserving and revitalizing First Nations, Metis and Inuit languages in Canada.

Downie’s “Secret Path” solo project honours 12-year-old Chanie Wenjack, who died in 1966 after running away from a residential school near Kenora, Ont. Proceeds from the album and graphic novel are being donated to the National Centre for Truth and Reconciliation at the University of Manitoba.

During a solemn and touching ceremony, Downie was given an eagle feather and swaddled in a star blanket, and also showered in indigenous gifts such as moccasins and blankets. He was anointed the “Man Who Walks Among the Stars.”

In brief remarks, a visibly moved Downie acknowledged Canada’s 150th anniversary celebrations next year, expressing the hope that the next 150 years will be better for all indigenous Canadians.

“It will take 150 years, or seven generations, to heal the wound of the residential school, to become a country that can truly call ourselves Canada. It means we must become one,” Downie said, at times sounding short of breath.

“I heard Gord Downie that night in Kingston and with you honouring him here today, I know you heard him too,” Trudeau said.

Downie embodies the desire of all Canadians for reconciliation, he added. “Just as your honouring him today was an act of reconciliation.”

Trudeau – who has pledged to make indigenous issues a hallmark of his mandate – said Canadians are working in unison to correct historical wrongs and to deal with the intergenerational trauma of indigenous people.

He also attempted to address an elephant in the room: the debate among First Nations about resource development projects, in particular the Kinder Morgan pipeline approved by his government last week.

Assembly of First Nations National Chief Perry Bellegarde also tried to bridge that divide Tuesday by suggesting that dialogue is needed to foster understanding about why some First Nations support or reject resource development projects.

Bellegarde also stressed the country needs to understand why it is critical to close the socio-economic gap between indigenous and non-indigenous people.

“It is really a journey,” he said during a news conference. “It is not dealt with in one year. I think everybody needs to get that in their head.”

Chiefs from across Canada have gathered for three days of meetings to discuss a range of issues, including resource development, aboriginal suicide and missing and murdered indigenous women.

Five commissioners are in the process of building a national organization from scratch in order to do sensitive work, said the inquiry’s director of communications Michael Hutchinson.

Hearings are expected to start in spring 2017, he added, noting work will be initiated beforehand to ensure it is a family-first process.

Trudeau also remains under pressure from indigenous leaders to address the level of funding of child welfare services on reserves in the wake of a January ruling from the Canadian Human Rights Tribunal.

First Nations child advocate Cindy Blackstock will be in Washington, D.C., on Friday to address the issue at the Inter-American Commission on Human Rights.