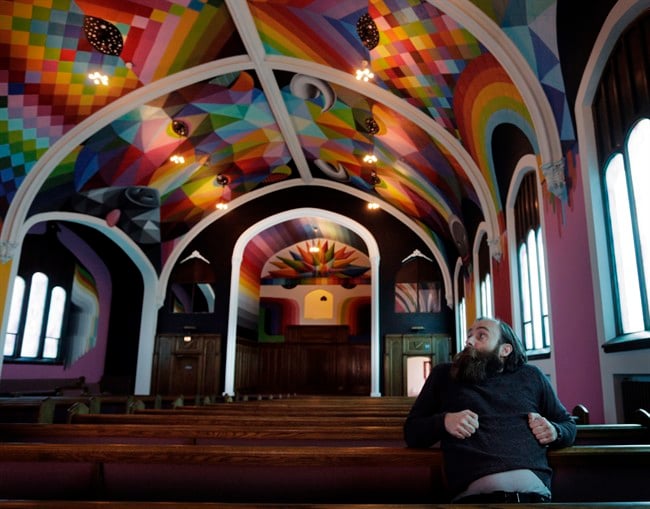 Lee Molloy glances up at murals on the ceiling of the sanctuary in the marijuana-friendly International Church of Cannabis on Wednesday, April 26, 2017 that Molloy helped found in Denver. The church was purchased for about $1 million and opened on April 20th — the annual day of celebration for marijuana enthusiasts.(CP Photo/Joe Mahoney)

DENVER – Walk into Denver’s International Church of Cannabis, and even the sober might feel a little bit stoned.

The church came first and the religion came second. Steve Berke, one of the founders, enlisted help from his parents to purchase the historic building, which cost over $1 million, Molloy said.

At first they weren’t sure what to do with it. They mused about turning it into condominiums, or a “mansion for a Broncos player,” Molloy said, before they finally settled on using the church as it was intended — well, sort of.

“We don’t pretend to know the mind of God. I’m not going to tell you what to do. I have nowhere near enough arrogance in me to be able to do that,” said Molloy, wearing the church’s interlocking-triangle symbol around his neck.

“It’s about self-discovery, going on your own spiritual journey. This is really a place in which you can safely do that — congregate with other like-minded people and find your best version of yourself.”

The church opened this year on April 20, the annual day of celebration for weed enthusiasts. Since then, membership has increased from 50 to 500, said Molloy, and a steady stream of visitors has been traipsing through to admire the trippy space.

The public is welcome between noon and 3 p.m. Monday to Friday to enjoy the stunning murals and to sit and meditate. Even though there’s no consumption during those hours, the church only allows people over the age of 21, the minimum age for using cannabis in Colorado.

“You basically do the same things you do in any other church, just without the guys in the weird black outfits,” said Molloy.

On the weekends, the church holds members-only events where using marijuana is allowed. Smoking pot in public is banned in the state, so transforming the building into a private space where only members are invited is crucial to getting around the law.

From the outside, the church would be indistinguishable from any other place of worship in Denver, if it weren’t for hallucinatory graffiti-inspired murals painted by American artist Kenny Scharf.

The church hasn’t arrived in Denver without controversy. The day it opened, Dan Pabon, a Democrat in the state’s House of Representatives, tried to add an amendment banning cannabis consumption in churches to a bill.

But some of Pabon’s fellow representatives argued that the amendment would be an unconstitutional restriction on religion, and it was scuttled, The Denver Post reported.

Molloy dismisses a suggestion that because the founders purchased the church before coming up with Elevationism, the religion isn’t legitimate.

“It’s irrelevant to me what other people think about this. We’re doing what we’re doing. It’s for real,” he said. “It’s a very serious undertaking. In time, it’ll prove itself.”