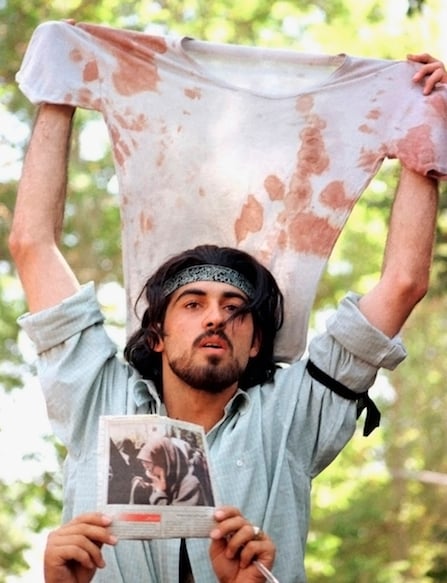 Iranian student Ahmad Batebi was arrested in 1999, two years into the presidency of Mohammad Khatami, for the crime of displaying the blood-splattered t-shirt of a fellow protester shot during demonstrations against the closing of a reformist newspaper.

A photograph of Batebi brandishing the t-shirt ran on the front page of the Economist magazine.

During his closed Revolutionary Court hearing months later, a judge showed him the photograph. It was the first time Batebi had seen it.

“With this picture, you have signed your death sentence,” the judge said.

“You have defaced the face of the Islamic Republic that is a representative of God on earth. You have defaced it around the world. And therefore you must be sentenced to death.”

While imprisoned, Batebi says he was tortured — beaten and forcibly dunked into a drain full of excrement until he inhaled its contents.

Following international protest, Batebi’s death sentence was reduced to 15 and then ten years. I met him secretly in Tehran in 2004 while he was on a day pass from prison, and I could not reveal the meeting then for fears of what might happen to him and perhaps his loved ones if I did. Four years later, while he was temporarily released from prison to get medical treatment, Batebi escaped Iran with the help of a Kurdish opposition group. He now lives in America.

Batebi’s story is not unique. Hundreds of protesting students were arrested in the summer of 1999, and often brutally abused. At least three died. The fates of others are unknown.

This is relevant because liberals inside and outside Iran greeted Mohammad Khatami’s 1997 election with great enthusiasm. He was expected to usher in a new period of moderation and openness in Iran. He was a reformer who called for a “dialogue among civilizations,” between Islamic and Judeo-Christian societies.

But innocent protesters were murdered on his watch, and Ahmad Batebi was sentenced to death for showing the world his comrade’s blood.

Khatami does not deserve total blame. The Iranian president is not the most powerful man in the country. That title belongs to Supreme Leader Ayatollah Ali Khamenei. And there are other pillars that make up Iran’s power structure, notably the ever more influential Revolutionary Guards.

But now a new reformer, Hassan Rohani, has unexpectedly and overwhelmingly won Iran’s 2013 election, and the response to his win is similar to that which followed Khatami’s victory 16 years ago. Many young Iranians are joyful. Western leaders are cautiously optimistic.

Caution is justified. It would be solely based on a sober analysis of human rights under Iran’s last reformist president. But Rohani was also personally involved in the 1999 crackdown. As the Wall Street Journal’s Sohrab Ahmari recalls, Rohani was president of Iran’s Supreme National Security Council at the time, and he was quite enthusiastic about bashing in the heads of uppity students.

“At dusk yesterday we received a decisive revolutionary order to crush mercilessly and monumentally any move of these opportunist elements wherever it may occur,” he told a pro-regime rally in July.

“From today our people shall witness how in the arena our law enforcement force … shall deal with these opportunists and riotous elements, if they simply dare to show their faces.”

It says much about the sad state of Iranian politics that Rohani was probably the best candidate on offer — after the unelected gatekeepers on Iran’s Guardian Council had narrowed the list of potential candidates to a handful of men they could live with.

Things could be worse. But unless Rohani, at the age of 64, demonstrates he has radically changed, that’s about the most that can be said about Iran’s election results.