Is Canada on track to reach herd immunity?

Vaxx Populi: Recent polling has shown 85 per cent of Canadians have either received a first vaccine dose or want to receive one. And that's up from 76 per cent in February. 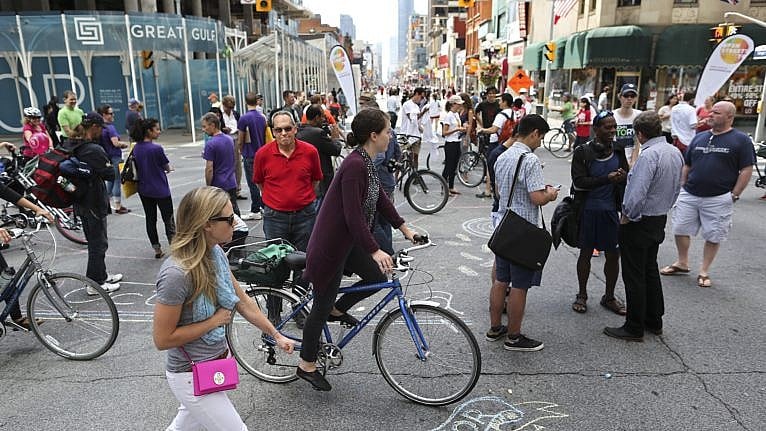 The intersection of Bloor and Yonge in Toronto, in pre-pandemic days. (Richard Lautens/Toronto Star via Getty Images)

Vaccine deliveries are ramping up and the share of eligible Canadians with at least one dose of COVID-19 vaccine in their arms has reached more than 46 per cent. Now, the focus is turning to speculation about the arrival of that prosaic two-word moment signifying everything has truly changed: herd immunity.

Herd immunity is the “state where a significant proportion of the population is immune to an infection leaving few susceptible people who can be infected and transmit the infection,” explains Public Health Ontario. In essence, if a critical mass of the herd is immunized, then infection doesn’t have much opportunity to spread to those with weaker immune systems or those who are unvaccinated.

For most viruses, “herd immunity can be anywhere from 50 to 90 per cent,” Dr. Supriya Sharma, Canada’s chief medical adviser, explained on March 5 at a press conference announcing the approval of the Johnson & Johnson vaccine. But, for the time being, experts say there isn’t one “magic number” for herd immunity against COVID-19. While 70 per cent would usually be needed for this type of virus, Sharma says that because highly infectious variants of concern are circulating in Canada, the share of the population with immunity may need to be higher, possibly up to 85 per cent.

RELATED: Confused by NACI’s AstraZeneca recommendation? Why the first shot offered is still the best shot

Reaching herd immunity is effectively a matter of math: the amount of vaccine arriving in Canada plus the number of people getting shots. Frank Graves, founder of Ekos Research, thinks Canada will get there. He has been polling on all things pandemic since early last year and sharing his results on social media. His latest poll from April 19-25 shows that 85 per cent of Canadians either have received a shot of COVID-19 vaccine or want to get a shot. And that has climbed steadily from 76 per cent in February. In contrast, the percentage of those who say they won’t get vaccinated has been going the other way, down from 24 per cent in February to 15 per cent now. And Graves’s data syncs with data from Innovative Research, which have 84 per cent of Canadians in the “likely or already vaccinated” group.

RELATED: What new COVID vaccine modelling says about when Canada might lift restrictions

Graves thinks Canada’s adoption of Britain’s decision to quickly broaden vaccine coverage through a “first dose first” strategy is crucial to getting enough people vaccinated so that life can return to normal. His research shows that 95 per cent of those who have already had first doses either have gotten or will get second doses.

Early evidence from countries like Britain, Israel and the United States shows that if you vaccinate enough people, the number of new infections will decrease. But it’s also a question of how far those rates can be driven down. In Britain, which has an extremely high acceptance of vaccinations, cases have plummeted from more than 60,000 a day to around 1,500, while the daily death count has dropped from nearly 1,300 a day to just one on May 3.

On the other hand, the United States is now facing a situation where the number of vaccinations is dropping rapidly, down from an average of 3.4 million doses a day a month ago to two million a day now. As of May 9, the Centers for Disease Control reports that 45.8 per cent of the population have received at least one dose, including 34.4 per cent who have been fully vaccinated. There are wide regional variations; states in the Northeast or on the West Coast have the highest proportion of first doses received, led by Vermont at 61.3 per cent, while states in the South and West are much lower, the lowest being Mississippi (32 per cent), Louisiana (33.4 per cent) and Alabama (33.7 per cent). So, while the overall situation is improving dramatically, experts worry that the disease will become endemic to certain regions.

In Canada, 39 per cent of the overall population have received first doses, and the country is on track to give out first doses to 75 per cent of its adult population by June 9, according to data crunched by University of Calgary economics professor Trevor Tombe. In contrast, Tombe estimates the United States won’t reach that same 75 per cent mark until 84 days after Canada.

Yet, there are still problems here. As Graves explains, “herd immunity is a product of communities. And communities aggregate up to form countries.” While some provinces are eagerly lining up for shots—he singles out Quebec, noting that “They were the worst out of the blocks [of the pandemic], but they are going to finish with a flourish”—the same can’t be said for Alberta, which he describes as a “hot mess.” Alberta has the lowest first-dose vaccination rate among the provinces in Central and Western Canada. And 19 per cent of Albertans surveyed told Graves that they would not get vaccinated compared to 14 per cent in next place British Columbia and just 12 per cent for all of Canada.

Still, Graves is hopeful that Canada will find its way out of the pandemic. “Everything is changing really rapidly,” he says. “What I would have found a month ago or even a week ago doesn’t look like what I see today.” He attributes some of those changes to the severity of the third wave of the pandemic, which seems to be helping bolster the case for vaccines. “When [people] see risk rising, they will respond, most of them rationally,” says Graves. And that means they want vaccines: “They really want to see this thing end and are scared about what’s going on in the community… We want normal,” he says.

While a lot of those polled by EKOS don’t think the country will achieve herd immunity for a while—four per cent say we’ll hit that marker by July; 17 per cent think it will be in September;  32 per cent say December and another 35 per cent believe it won’t occur until 2022—Graves is far more optimistic that things will improve significantly by summer. “It’s going to be just brilliant compared to [this past] winter and the previous summer.” It won’t be a complete respite from the pandemic, as more and more of the population get first and second doses, but “it’s going to be manageable. Let people know that.”