Gun violence is killing 30,000 Americans a year. Why not treat it like smoking? Or heart disease? 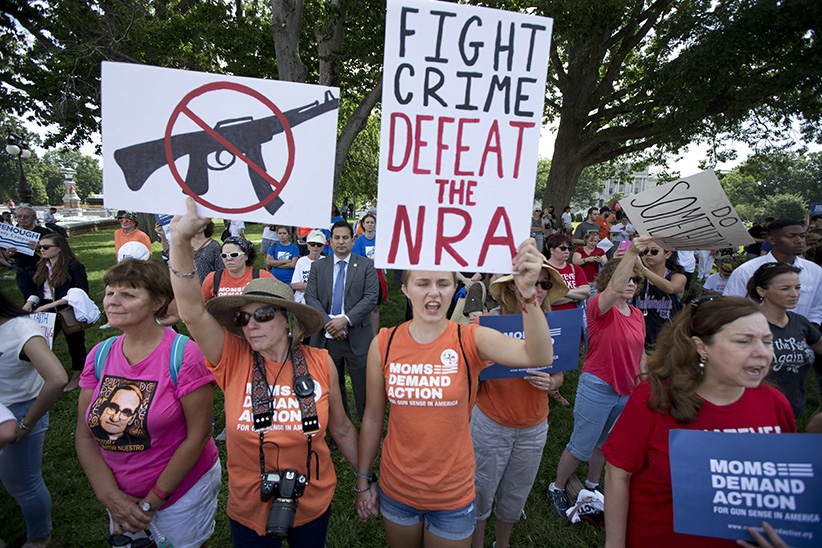 For over two decades, there has been a virtual freeze on gun violence research in the United States. In 1996, Congress passed a bill preventing the use of federal funds for studies that advocate gun control, which was widely interpreted as preventing all research into firearm violence. Though U.S. President Barack Obama reversed the order in 2013, Congress continues to block dedicated funding. And this data deficit is posing a significant complication for those hoping to find a solution for America’s gun-death epidemic.

Dr. Michael Siegel, a professor of Community Health Sciences at Boston University, stresses that gun violence is a public health problem. But before preventative measures can be taken, he says, Americans need research. On Friday, Maclean’s talked to Siegel about how the lack of federal funding is harming firearms research in the United States, and what that means for public opinion.

Q: Why do you think of gun violence as a public health issue?

A: In public health we are concerned about the major causes of death. There are really two things that make something a public health issue. One is the burden of disease on the population and the second is the fact that we can do something to prevent it. So, if you look at smoking: Why is it a public health issue? Because, number one it’s killing 400,000 Americans every year and number two, there are interventions that we can do on a societal level to reduce smoking… The same should be true of firearms. They’re killing 30,000 people a year — about one-third of those are homicide and about two-thirds of those are suicides — but there are things we can do about it. It’s clearly a societal problem, there are clearly societal approaches to it.

Q: In order to treat gun violence as a public health issue, you note that Americans need to first accept there’s a problem, and that it’s preventable. That seems like a difficult task, as there’s a significant population that doesn’t appear to agree.

A: That’s the way the government has treated it. If you read how politicians react to these tragedies that keep happening, the usual response is, “our thoughts and prayers are with the victims,” rather than “I’m going to put an end to this, and I’m going to put an end to this tomorrow.” With a terrorist attack, our actions are typically very very different: “this will never happen again,” “not on our soil,” “we’ll do everything we can to prevent this.” But certainly the everyday violence that is killing many many people, and disproportionately African Americans, is [deemed] acceptable in society. It really is.

Q: Over time, public sentiment towards serious health concerns like HIV and smoking has shifted. Will that happen with gun violence?

A: That’s exactly what needs to happen. The social norms regarding gun violence have to change. The way we view guns as a society and their role in society has to change. Those are social changes that take time but I do believe they can happen. Thirty years ago, when I started getting involved in tobacco control … everybody would have said, ‘C’mon that’s impossible.’ But it happened. And I think the same is true of firearms violence.

Q: In the cases of HIV and smoking, public sentiment changed in large part due to significant research and data. How can America get to the ‘acceptance’ stage if there’s very little research?

A: Well you’re exactly right. We can’t. That’s the problem. When you cut off the research you basically cut off the ability to put the kind of information out there that is needed in order to facilitate social change. Social change with regard to smoking didn’t happen on its own. It didn’t occur because it was a natural progression, it happened because of a concerted effort on the part of public health practitioners, government, educational institutions, and community who basically committed themselves to tackling the tobacco epidemic.

Q: Is the problem one of not enough research, a need for better research, or improved communication of research that’s already out there?

A: Unfortunately, the stage we’re at with gun violence research is basically that we need more research. We’re not at the stage where the problem is we’re not communicating what we have, or we’re not doing the right research. The problem is just that there’s not enough research being funded. The budget for CDC research on gun violence is basically zero. It’s not an issue of the CDC doing the wrong research, or they’re not communicating, they’re just not doing anything.

Q: Aren’t there other centres that can do the research?

A: Even with other centres, the question is always, ‘Who is going to fund it?’ The federal government is basically not funding it. One of the things President Obama did was, by executive order he ended the long-term ban on federal funding for firearms research, which is great. But the problem is the government agencies and Congress still have to allocate the money, the funding, and right now my understanding is that there’s only about $2 million a year that’s being used for funding for firearms research. So even though the government technically is allowed to fund it, it’s obviously not a priority if we’re only spending a drop in the bucket on it.

Q: How little research is there really?

A: I can compare it to other fields. I’ve worked in the tobacco field and I’ve worked in the alcohol field and there are literally thousands and thousands of articles on tobacco. … In alcohol [the amount of research is] a little smaller than tobacco, but there’s still a fairly large literature. When I got into these fields, the first thing I did was to try to review all the literature. For smoking it has basically taken me twenty years to really become familiar with the literature, there’s so much of it. With alcohol it actually took significantly less time. Within about four years I was pretty well versed in the literature. With firearms, it took literally about a month. There just wasn’t that much. Within a month I basically had seen and read the bulk of what was out there. So it’s not even close. It’s not a coincidence. It’s a direct result of the lack of funding over the last two decades.