Is it time to sack the humble sandbag?

Our go-to solution to flooding hasn't changed for centuries. There must be a better way. 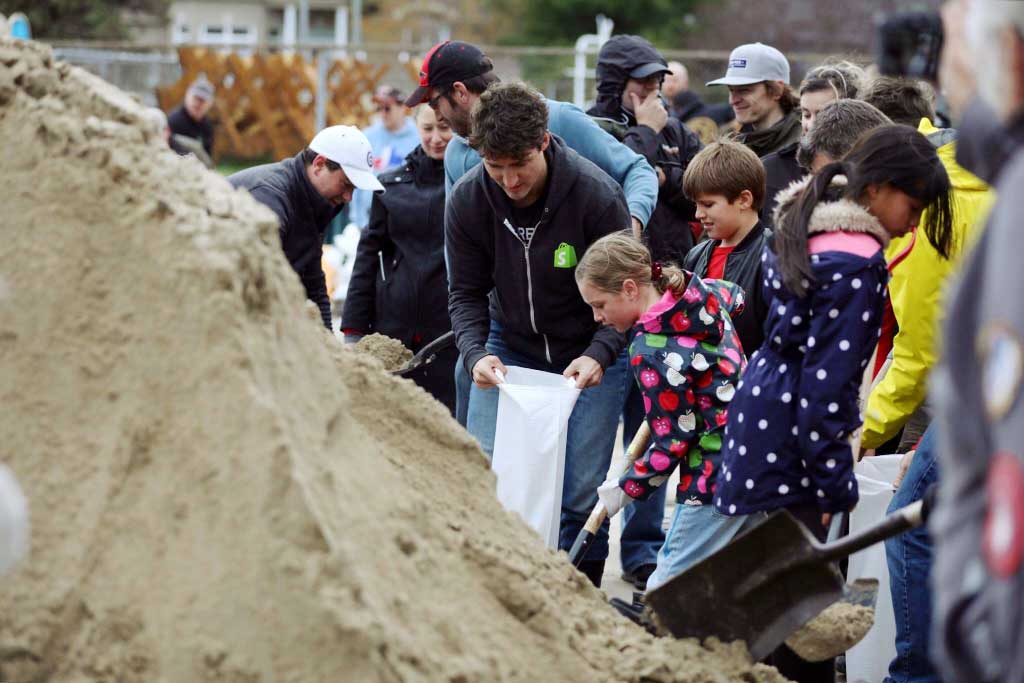 When fighting floods, Canada’s front line consists of lumps of sand. Soldiers and volunteers have been sandbagging throughout Quebec and Ontario, straining their spines in archaic labour, hoping to keep their basements out of the path of least resistance. “They just throw bags down,” says Jim Stinson, a retired RCMP emergency responder in Winnipeg. “I actually pull my hair out thinking of it.”

Sandbagging has been standard practice in flood response for centuries. This week, floods led Montreal to declare a state of emergency; a father and two-year-old girl have gone missing in a river on the Gaspé Peninsula, while Toronto Island prepared to evacuate; until the water wanes in all these places, emergency responders are trying to divert it from homes, largely with sandbags. The method might be cheap, but it is slow and sweaty, and amateurs often construct these stacks of sand less like castles, more like dunes.

The principle of sandbags hasn’t changed since the Mississippi Flood of 1927, when residents chucked sacks of earth to heighten the levees; Manitoba’s Red River Flood of 1997 called for another 8.1 million bags—white sacks which residents called “perogies.” Modern sandbags are made of polypropylene, cost as little as 20 cents each at hardware stores, and can be filled with dirt, grain or road salt by anyone with biceps. Canadian Forces and prison inmates have often been recruited to fill bags, and some contractors and municipalities have invested upwards of $20,000 in automated sandbagging machines that fill 8,000 bags per hour.

Sand can be powerful, but volunteers tend to erect not-so-great walls. Builders rarely know to stagger the bags like laying bricks, and to avoid 90-degree angles so they don’t collapse on impact. Researchers at the University of Manitoba found in 2005 that a sandbag wall constructed by volunteers couldn’t even withstand still water. Yet, the do-it-yourself dykes stood strong when built properly; that is, using a pyramid-style base with a four to one width-to-height ratio, then covered in tarps to protect from water seeping through. This week, on Montreal’s West Island, one resident told reporters he had hauled about 600 sandbags to his grandmother’s house yet failed to keep it dry. As Stinson says, “I’ve built dykes five and six feet high that have held the Red River back,” but when poorly constructed, “everything is fail-able.”

Sandbags can also disintegrate in the sun, as people forget to cover them with tarps and dirt. Some bag brands claim to be sun-proof, but Stinson says, “I don’t care how much UV protection you’ve got. You leave it in the sun for a year, you can poke a finger right through them.”

Newer options are bladders. Several American companies sell plastic bags that people simply drop on the ground, and that fill with floodwater itself to create a dyke. WaterBloc, a company based in Saskatoon, sells 50-foot tubes that fill the same way, creating non-porous barriers. Greg Plett, a salesman for WaterBloc, says there’s “no comparison” between his product and sandbags. “When there’s a flood and people are under duress, they’re just like throwing the bags down,” he says. “Wherever they land, they land. That’s the reality.”

One other problem with sandbags: although volunteers tend to be gung-ho for the heroic task of fortifying their territories, they are less willing to help take the bags down. The sacks full of contaminated, wet sand need to be hauled to dumps. “It’s a mess,” says Plett. “Flooding is natural, but it doesn’t have to be a disaster.”