Which issues divide the U.S. and Russia? A quick guide

Relations between Moscow and Washington are at their lowest point since the Cold War. Here are some of the issues on which they are divided. 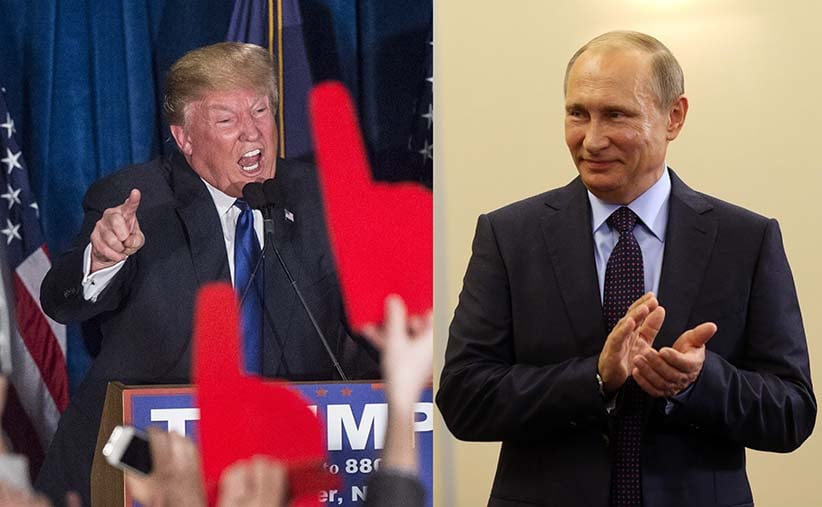 MOSCOW – The Kremlin hopes that Donald Trump will move to improve badly strained Russia-U.S. ties once he takes office. Relations between Moscow and Washington are at their lowest point since the Cold War amid the Ukrainian crisis, the war in Syria and other issues.

It would be challenging to reach common ground on some issues even if Trump and Russian President Vladimir Putin both want it, as the interests of Russia and of the United States differ sharply and many U.S. allies have a deep distrust of Moscow’s intentions. On some issues, however, there is a measure of agreement.

Here is a look at some of the items on the Russia-U.S. agenda:

U.S. intelligence agencies have accused Russia of meddling in the U.S. election through hacking, to help Trump win, claims that Russia has rejected. Trump last week conceded that Russia was likely responsible for hacking into Democratic emails, but insisted that didn’t affect the outcome of the vote. He argued that the U.S. has been hacked by China and other countries as well.

U.S. and EU officials also have accused Russia of hacking other Western institutions and voiced concern that Russia may try to influence this year’s elections in Germany, France and the Netherlands. The hacking issue is likely to weigh over Trump and could overshadow any possible attempt by his administration to improve ties with Moscow.

The Ukrainian crisis and anti-Russia sanctions

During the U.S. election campaign, Trump refused to condemn Russia’s annexation of Ukraine’s Crimean Peninsula in 2014 and even hinted that he would consider recognizing it as Russian territory. Such a move, however, would trigger massive opposition in the U.S. Congress and rattle U.S. allies, so it appears highly unlikely.

Led by Washington, the European Union and other U.S. allies have slapped Russia with several waves of sanctions in response to the annexation of Crimea and Moscow’s support for a pro-Russia insurgency in eastern Ukraine. The sanctions, along with low oil prices, have driven Russia’s economy into recession, and Putin sees getting them lifted as one of his top priorities.

Obama’s administration and the EU tied rolling back the sanctions to progress in a 2015 peace deal for Ukraine, which has floundered. It would be difficult for the Trump administration to push for the sanctions’ removal while clashes in eastern Ukraine are continuing.

Some U.S. lawmakers have proposed further ratcheting up anti-Russian sanctions.

Trump has said Russia and the U.S. should combine efforts to fight the Islamic State group in Syria.

Moscow long has pushed for such co-operation, hoping it would help turn the page on the Ukrainian crisis and improve its ties with Washington. Obama’s administration ruled out such an alliance, however, because of the Kremlin’s focus on shoring up Syrian President Bashar Assad.

Chances for U.S.-Russian co-operation in Syria are higher now when Assad’s foes are weakened and demoralized following their retreat from Aleppo, the nation’s largest city. With Assad’s positions stronger than ever since the start of the conflict nearly six years ago, Russia may focus more on fighting IS, and would eagerly embrace co-operation with the U.S. if Trump offers it.

The New START nuclear arms reduction treaty signed by Russia and the United States in 2010 limited their nuclear arsenals to no more than 1,550 deployed nuclear warheads for each country. The treaty is set to expire in 2021, but they could agree to extend it as they both appreciate the measure of transparency the deal offers.

The treaty doesn’t prevent either side from modernizing their arsenals, which Russia is already doing and Trump has vowed to do.

There have been frictions, however, regarding another arms control pact, the 1987 Intermediate Range Nuclear Forces Treaty, which outlawed that entire class of nuclear missiles. Washington and Moscow have traded mutual accusations of violating the treaty.

The deployment of U.S. and other allied troops and weapons in the Baltics and Poland in response to Russia’s actions in Ukraine has angered Moscow, which has described it as proof of Washington’s hostile intentions.

Russia also has been sharply critical of NATO’s U.S.-led missile defence plan, which includes a site in Romania and a prospective facility in Poland. Putin has described the program as an attempt to erode Russia’s nuclear deterrent, dismissing U.S. claims the shield is intended to fend off a potential missile threat from Iran.

These issues are likely to remain a top irritant in U.S.-Russia ties.