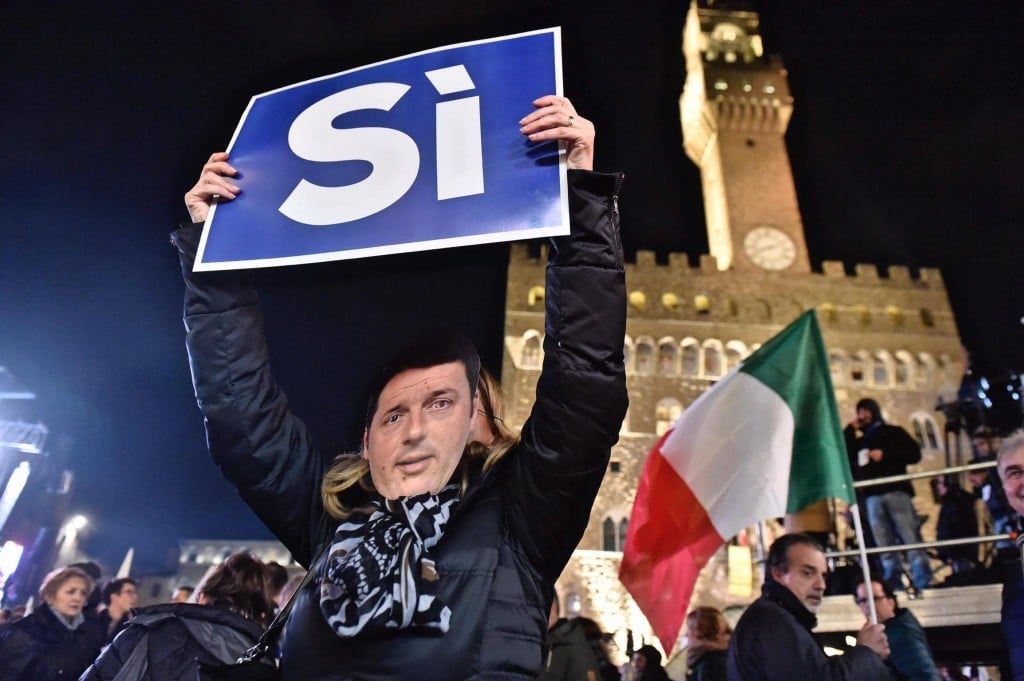 A woman wears a mask of Italian Premier Matteo Renzi as she holds up a sign reading “Yes” during a rally on the upcoming Italian constitutional referendum in Florence, Italy, Friday, Dec. 2, 2016. (Maurizio Degl’Innocenti/ANSA via AP)

ROME – A voter referendum on changes to Italy’s post-war Constitution scheduled for Sunday has turned into a virtual plebiscite on Premier Matteo Renzi’s centre-left government. Will Italy become the next Western country to turn on established political leaders? A rundown on what’s at stake in the constitutional referendum:

Nearly 51 million Italians are eligible to cast ballots, ticking off “Yes” or “No” to whether they approve the proposed reforms hammered out by Parliament. Voting begins at 7 a.m. (0600 GMT) and ends at 11 p.m., (2200 GMT). Ballots already cast by Italians living abroad will be counted along with the Election Day tally.

What would the reforms do?

The biggest change would be to Italy’s lumbering lawmaking process. The revised Constitution no longer would require both chambers of Parliament to vote on all legislation, including after each time a bill gets amended.

Instead, only the 630 members of the Chamber of Deputies would make most laws. The Senate would shrink from 315 to 100 members. Five would be appointed by Italy’s president and the other 95 drawn from the ranks of Italy’s mayors and regional representatives.

Confidence votes, which determine a ruling government’s survival, also would be the exclusive province of the Chamber.

The other major reform transfers some authority from Italy’s regions to the central government. Currently, jurisdictional disputes end up in Italy’s slow-moving court system.

A recent example of the kind of tug-of-war the change is designed to address: Italy’s constitutional Court threw out a national law that would have made it easier to fire workers who punch time cards, then effectively don’t go to work. The court said Renzi’s government should have involved the regions in making the change.

Renzi, his centre-left allies, and banks and industrialists say the reforms would help modernize Italy. Opponents, including the populist 5-Star Movement, which is now the chief rival of Renzi’s Democrats, contend the reforms would erode democracy by concentrating too much power in the premier’s office.

Others urging voters to reject the amendments are former centre-right Premier Silvio Berlusconi, hardliners with Communist roots who are now in Renzi’s Democratic Party, and Matteo Salvini, leader of the anti-immigrant Northern League, which wants regions to have more, not fewer, powers.

What the polls say

By law, the last opinion polls were published on Nov. 14. The “No” camp was leading, but many voters were undecided.

Renzi has ruefully confessed to making a big “mistake” by saying early on he’d tender his resignation if the “No” votes prevail. His pledge effectively transformed a straightforward vote on the reforms into an opportunity to send him packing.

Renzi argues the reforms would drastically reduce the so-called cozy “caste” of perk-enjoying politicians in Parliament. At age 41 the youngest prime minister to serve Italy, he depicts himself as anti-caste. But 5-Star co-founder, comic Beppe Grillo contends Renzi is himself part of the party system and thus, a caste member, too.

The “caste” mantra taps into a wave of populist anger rippling through much of Europe.

If he makes good on his earlier vow, Renzi would be expected to offer his resignation to Italy’s head of state, President Sergio Mattarella. But Renzi has not always kept big promises. He barged his way into national power in early 2014 by ousting fellow Democrat Enrico Letta from the premiership, only days after promising he’d never take that office without elections.

Answer: Renzi. Since he heads the Democrats, Parliament’s largest party, Mattarella could ask him to try to form a new government. A so-called “technocrat” government _ made up of economists and other individuals from outside politics, might be even more unpalatable than Renzi Redux for many Italians.

Parliamentary elections are scheduled for the spring of 2018. While a political crisis might advance the date, many politicians in Italy are in no hurry.

As the election laws now stand, the party with the most votes gets a big bonus of seats in the Chamber of Deputies, a feature designed to encourage stability in a country long on short-living governments.

But after the populist Grillo’s stunning wins in Rome and other mayoral races earlier this year, the 5-Stars are eager to take national power. So a post-referendum priority of Parliament would likely be tweaking the electoral law to minimize a potential 5-Star surge.