John Tory handily won re-election as Toronto's mayor. But whether measured blandness will be his political legacy is now up to him—and Doug Ford 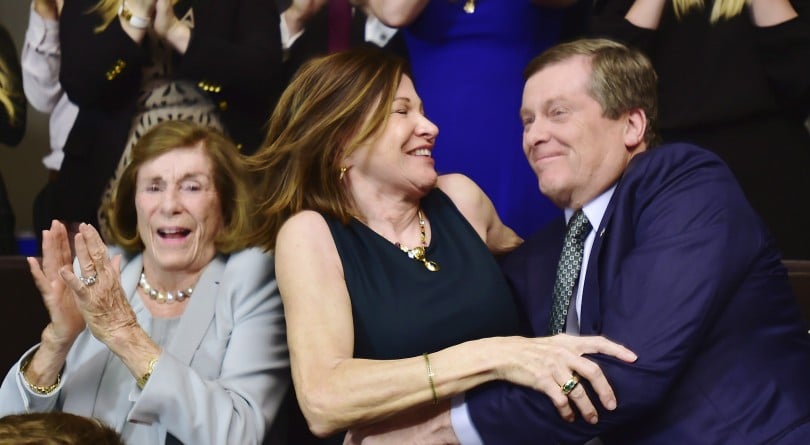 Long before his stint as head of the cell phone division at Rogers (which is the parent company of Maclean’s) and then his exploding-cigar years as the leader of Ontario’s Progressive Conservatives, Toronto mayor John Tory served for a time as principal secretary to the province’s long-serving and lionized premier Bill Davis, who took pride in a somnolent political style summarized aptly by the motto: “bland works.”

For Davis, bland did indeed work, as he presided over some of the most ambitious and costly institution-building efforts in Ontario’s history. His fingerprints were all over Ontario’s education system, the transportation network, the electricity grid and the municipal governance of Greater Toronto.

In some ways, Tory’s style as Toronto’s mayor—which, as of Monday night’s municipal election, will extend for another four years—pays homage to his former mentor. He won almost 478,000 votes (63 per cent of the total cast), convincingly defeating his principal rival Jennifer Keesmaat, the city’s outspoken former chief planner, in a dreary campaign. At stake was the leadership of Canada’s largest municipality, whose $13-billion annual budget dwarfs that of even the largest of Atlantic Canada’s provincial administrations.

Tory’s margin of victory is deceptive. In an era of demagogues and loud-mouths, this mayor stirs no one to fits of passion. Among the press corps at City Hall, he’s famous for his “word salad” answers, which meander aimlessly, like a prairie river. Outside the fish bowl, you can ask almost any Torontonian, and most will reflexively say that Tory is well-mannered and nice—basically, that his defining characteristic is that he is the antithesis of his predecessor, Rob Ford, whose taste for crack and slurping vodka in the bushes turned Toronto politics into a laugh line on Jimmy Kimmel Live.

What remains far less clear—at this point anyway—is whether Tory is prepared to use his own cultivated blandness as political cover for the sort of transformative agenda that Davis pursued, one that turned out to be far more progressive than conservative. As Toronto Star columnist Shawn Micallef recently observed, Tory seems to have spent his whole life working to become mayor, but it is frustratingly difficult to tell whether he’s got the judgment and the desire to deliver on the second word in Davis’s aphorism. Nor does anyone, including Tory himself, really know whether Ontario’s populist premier Doug Ford plans to continue subverting Toronto’s municipal business, as he did late in the summer when he summarily halved city council in the midst of an election campaign, and did so with virtual impunity.

Every so often, cities rouse themselves to elect mayors who somehow embody something essential about a particular place and time. In the 1960s, Montreal’s Jean Drapeau evoked the hard-driving, nation-building aspirations of Quebec’s Quiet Revolution. When he swept to power in 2010, Calgary’s Naheed Nenshi projected the out-there panache of a city that had become far more cosmopolitan than eastern Canadians thought possible. And even more recently, Vancouver’s Gregor Robertson refracted the kind of cool urbanism that had accrued to a vertical city that was more than ready to shed its parochial, frontier habits.

Tory, by contrast, reflects almost nothing about 21st-century Toronto. Unlike the city he governs, he is neither self-involved, brash nor publicly arrogant. In a region flush with tech-industry cash, Tory’s wealth comes from the old and dull corners of law. White, male, straight and middle-aged, he doesn’t have so much as a suggestion of ethno-cultural intersectionality, and yet he serves as chief magistrate in a city where more than half of all residents were born abroad and many more grew up with immigrant parents. And the achievements of his first term fail to live up to a city of enormous ambition.

Besides restoring civility to council, Tory’s MO has been to pursue a complex and (sort of) centrist agenda that includes all sorts of prohibitively expensive city-building projects combined with various gestures towards social inclusion, the latter often inflected with hints of noblesse oblige. He’s presented himself as socially progressive for years. Yet it’s been difficult for Tory to completely suppress his, well, Toryism, which tends to reveal itself in debates about policing and taxes. Like most of his predecessors, he loves to promise voters that other orders of government will pay for Toronto’s capital-works schemes, but is loath to lead a push to hike taxes. His boldest such plan—to implement a road toll for the Don Valley Parkway and Gardiner Expressway—was scuppered by Kathleen Wynne’s Ontario Liberal government in 2017, and there’s no other real plan being mooted that would allow Toronto to pay for its ambitions without, say, raising property taxes.

During his first term, too, moments of crummy judgment—Tory’s Achilles heel—also occurred now and again. For instance, during a severe cold spell last winter, he stubbornly resisted calls to open more shelter beds for the homeless.

If Tory’s intent is truly to hang around for only one more term—he’s 64 and has long claimed he’ll call it quits after eight years—it’s theoretically possible that he might emerge as a more activist mayor, imposing, for example, new forms of tax that could be used to pay for his costly but under-funded pledges to bring more rapid transit and affordable housing to a city starved for both. While the council elected yesterday is almost evenly split between left and right, Tory’s whips will be able to round up votes for his agenda because his victory was so substantial.

But council’s internal politicking won’t be the true test of Tory’s ability to deliver an ambitious second-term agenda and possibly even a legacy. Rather, his most demanding challenge will come from Queen’s Park, where Ford—who lost to Tory in the 2014 mayoral race—has pledged to press ahead with more drastic changes to the municipality, including uploading Toronto’s subway system to a provincial agency. It’s almost certain the provincial Tories will try to download more costs onto the city in Ford’s drive to reduce Ontario’s $330-billion debt and bring its deficit into line. And because Ford clearly revelled in the political dividends to be had in attacking the City of Toronto, there may be more drive-bys to come.

Tory’s dedication to low-temperature politics and backroom accommodation could work in the city’s favour if he’s a good negotiator and has a sense of how to deliver wins for both sides. At the same time, both Ford and Tory know that the city’s got no real leverage, which means the mayor’s well-known distaste for public brawling may also make him uniquely vulnerable to Ford’s bully-boy tactics.

It is somewhat remarkable that after a political career that began in 2003, we still don’t know what Tory will do with his long-sought second term in office; this is, after all, just the third non-leadership election he’s ever won. Still, with the Ontario government’s first mini-budget due to be released later this fall, Torontonians will soon have a clear sense of whether the next four years will be a victory lap, as he becomes a mayor that truly reflects the dynamic city he leads—or a gruelling four-year schlep up the CN Tower.