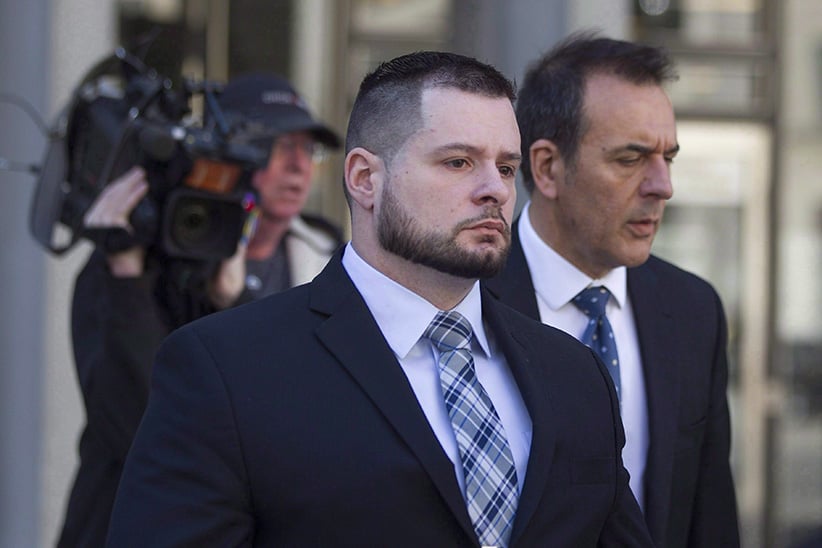 Const. James Forcillo leaves court in Toronto on Monday, May 16, 2016, after a suspension in his sentencing hearing. A Toronto police officer convicted of attempted murder in the shooting death of a troubled teen on an empty streetcar is expected to learn his fate today. (Chris Young/CP)

Ontario’s top court has dismissed the appeal of a Toronto police officer who was convicted of attempted murder in the fatal 2013 shooting of a troubled teen on an empty streetcar.

Const. James Forcillo had fired two separate volleys at Sammy Yatim, an 18-year-old who was wielding a small knife, in an incident that was caught on video and sparked public outrage.

“As the trial judge stated, the appellant’s conduct in firing the second volley constituted a ‘fundamental failure to understand his duty to preserve all life and not just his own,'” the appeal court ruling said.

The officer had asked the appeal court to substitute a not-guilty verdict or order a new trial in his case. He also appealed his sentence, which was a year more than the mandatory minimum.

Forcillo argued the trial judge improperly excluded evidence on Yatim’s state of mind, and wrongly instructed the jury to consider the two volleys of gunfire as separate incidents.

“It remains our view that the appeal raised important and difficult legal questions,” Michael Lacy and Bryan Badali said in a statement. “We will carefully review the court’s decision and in consultation with our client will make a decision as to whether or not we will seek leave to appeal the decision to the Supreme Court of Canada.”

Toronto police suspended Forcillo without pay after he was sentenced in 2016.

Police spokeswoman Meaghan Gray has said an internal disciplinary process — which could result in Forcillo being dismissed from the force — would begin once the appeals process is over.

Forcillo was initially out on bail pending the outcome of his appeal.

In November 2017, however, he was charged with breaching the conditions of his bail after authorities found him living at the home of his new fiancee and not with his ex-wife, as the court had instructed him.

Forcillo had his bail revoked and was later charged with perjury and attempting to obstruct justice. He is scheduled to return to court on May 4 to address procedural issues related to the newest charges.